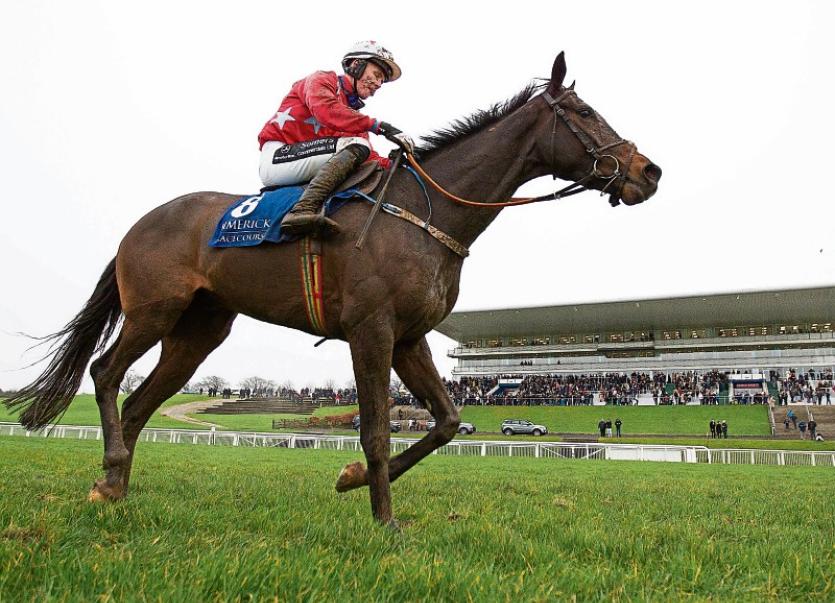 Backintheboom, ridden by James O'Sullivan, passes the stand at Limerick Racecourse during the FutureTicketing.ie Maiden Hurdle on St Stephen's Day

LIMERICK Racecourse recorded an increased attendance on the opening day of their four-day Christmas Racing Festival.

The festival, which boasts more than €470,000 in prizemoney, continues until this Friday, December 29 at Greenmount Park

The Festival began with a bang on St Stephen’s Day when 13,808 racegoers packed the enclosures in Patrickswell.

The crowd was up slightly on the 2016 St Stephen’s Day figure when 13,742 passed through the turnstiles.

Betting turnover on the opening day through a combination of the bookmakers' ring and the Tote came to €300,000.

There was a thrilling local success on St Stephen’s Day also as the well-backed Minnies Secret, trained by Ballingarry handler Charles Byrnes landed the concluding Lyons Of Limerick (Mares) Bumper.

Minnies Secret scored a bloodless 19-length success after being backed from 9/4 on track into 6/4 favourite.

Limerick Racecourse general manager, Patrick O’Callaghan was delighted with the St Stephen’s Day attendance, traditionally the biggest of the Festival.

“I was absolutely delighted with St Stephen’s Day. The ground was in great nick, we were very, very pleased with the going.

”I think we had only one non-runner on St Stephen’s Day which shows connections were very happy to send their horses out in the ground. That is very positive.

”The crowd was very, very good. I was pleasantly surprised with the attendance. We were up slightly on last year.

”Our restaurant was full, all our corporate boxes were full on St Stephen’s Day.

“The Munster match at Thomond Park didn’t really take from us at all. I thought it might.

​”We would hope that some people who went to the Munster game on St Stephen’s Day will come to see us at the racecourse over the three subsequent days.

“The weather forecast is also dry for our third day, December 28, after two dry days to start with.

“There has been a great buzz around the racecourse through the opening days."

Racing gets under way on Thursday, December 28 at 12.35pm with the feature being the Irish Independent Grade 3 Hurdle worth €34,000.

December 28 is also the Sunway Holidays Festive Most Stylish Day which will see a holiday for two up for grabs for the winner.

The last race on day three goes to post at 3.55pm, with a DJ entertaining racegoers after racing.

December 29 is the final day of the Festival with the opening contest due off at 12.30pm.

Several horses which have won at Limerick at Christmas have gone on to enjoy hugely successful National Hunt seasons in both Ireland and the UK, with the likes of Penhill, Faugheen, Martello Tower and Weapons Amnesty all going on the win at the Cheltenham festival the following March.

Under 12’s can attend the Festival on all four days for free when accompanied by an adult.

Keep up to date with your Limerick Christmas Racing news on www.limerickleader.ie