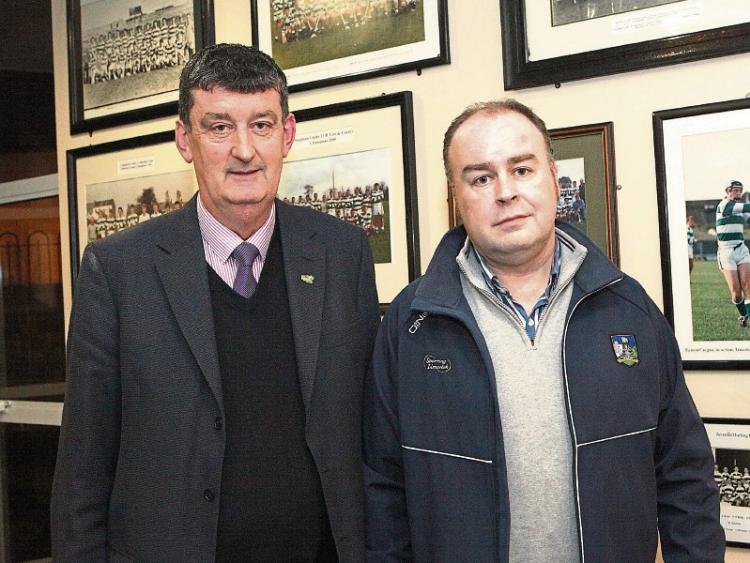 LIMERICK GAA will elect a new County Board chairman on Sunday December 17 at Annual Convention in Cappamore Community Centre.

Dromcollogher-Broadford’s John Cregan and Claughaun’s Liam O’Sullivan go head-to-head in an election to replace Patrickswell’s Oliver Mann, who has to depart due to the five year rule.

In December 2014, Mann saw off a challenge from then vice-chairman Pat Heffernan of Blackrock. In what was the first contest for the chair since 1996 when Gerry Bennis ran against Brendan Danaher, Mann defeated his challenger by 207 votes to 95.

Both Cregan and O’Sullivan are out-going officers as Football Committee Chairman and County Board Vice-Chairman respectively but the duo have decided that they are departing those roles regardless of the chairman election result.

As the final countdown begins to the annual gathering of club representatives and the chairman election, LeaderSport put key questions to both candidates for the role of the Limerick GAA chairman.

What is the biggest issue facing Limerick GAA over the next five years?

CREGAN: The biggest issue facing Limerick  over the next five years is to ensure that our teams are consistently competitive from U-14  to senior in both codes. If Limerick teams can achieve this our chances of provincial and national success will be greatly increased, i.e. The more competitive we become the more finals we can reach and the more finals we can reach the more finals we can win. 'Success breeds success'. Champions become role models for future generations of players and that inspiration is badly needed to instill the belief that it takes to win. Consistency builds momentum and momentum leads to success. To have our teams prepared for this level of participation will require substantial additional financial support and that is far more difficult to achieve when a county lacks silverware. We have now a solid foundation to build on and I believe our senior hurling panel are now ready to compete for Munster honours and when we win in Munster only then should we start thinking & talking about winning All Ireland’s.

O’SULLIVAN: Numbers. By this, I mean that clubs are facing massive challenges in areas such as player retention and the recruitment/development of officers and volunteers. The work of keeping a club going seems to be falling to fewer and fewer people. Volunteerism is what makes the GAA unique and, as Chairman, I would initiate a major drive in this regard. On the playing front, it is vital to have a regular and balanced games programme across all age grades if we are to keep our youngsters playing Gaelic Games. There should also be greater effort and focus on clubs developing their own coaches. There’s plenty of talent in Limerick and I would encourage an enhancement of the Coach Education Programme to assist our clubs.

What would you consider your biggest achievements and biggest disappointments to-date?

CREGAN: My biggest achievement I think is on occasions being able to draw on my experience to get individuals and groups working together to achieve a particular goal, often with limited resources. When in positions of leadership I have always strongly believed in delegation. Recognising the talents of those around me and then placing the right people in the right places at the right time. I see the role of Chairperson as a team leader and for me the “Limerick Team” consists of all of our players, their parents and families, their schools and their teachers, their clubs and coaches, our divisional boards, the delegates to county committee, all of our various sub committees, our sponsors and our supporters and finally  our management committee. T.E.A.M “Together Everybody Achieves More”. I am a positive and optimistic person by nature and I don’t dwell on disappointments and I don’t hold grudges, I take the positives and move on.

O’SULLIVAN: The Strategic Development Plan of 2011 may have been largely overlooked but, almost 7 years on, a reading of it will show that 95% of its targets were achieved. Chairing the CCC has been an experience and we have always finished all competitions on time for provincial deadlines. I’d like to think, however, that my best achievements lie ahead of me. We’re well used to disappointment in Limerick but I prefer not to dwell on the past. It’s about learning from previous disappointments and planning for our future. We have huge potential and, if properly harnessed, our best days are before us.

There have been calls to run junior championships on an all-county basis. Do you see a future for divisional boards?

CREGAN: I strongly support a divisional board structure going forward because of the opportunity it provides to Clubs to compete locally at their own grade and it brings our organisation closer to our people and supporters. However our divisional championships have to be competitive and meaningful and while they are excellent in many instances, where they are not we have to put solutions in place to ensure we  protect and support  what is good and identify and change what is not, for the better. With passionate and energetic administrators at divisional level we can provide the platform for our games to thrive at a more localised level. We have Minor, U-21, Junior A and Junior B championships played on a divisional basis and we enjoy the many great games and great rivalries that exist. Our participating Clubs deserve meaningful competition.

O’SULLIVAN: Divisional Boards have done great work in fostering and promoting our games and there is certainly a future for them. Local rivalry is a great bedrock of the GAA. However, we have to be smarter in how we approach our junior championships. Players should be entitled to a level field when it comes to the number of games they play. The lopsided numbers in our divisions have made for a big disparity here and I believe a player’s access to quality games shouldn’t be determined by geography alone. I would favour reviewing it on a yearly basis with teams moving across divisions, if necessary, to balance the competition. It could certainly still be run under the auspices of the divisional boards if this became the basis of organisation.

Between Mick Neville Park, the Gaelic Grounds and St Enda’s Complex, there is much physical development required. Thoughts?

CREGAN: The lack of meaningful inter county fixtures in recent years in the Gaelic grounds has deprived us of the revenue needed to continue to meet the standards expected of a modern stadium. The new Munster senior hurling format will now ensure that we are guaranteed at least two home fixtures apart from Munster finals which no doubt we will also host more regularly in the years ahead. The hosting of these games will provide a much improved income stream which I would hope would allow us to commence a badly needed face lift in the short to medium term and while much more is probably required in the long term we can only do what our financial resources will allow. Mick Neville Park is the envy of many county boards. This facility is  an invaluable asset. Maximum usage requires a high level of maintenance and the upgrading of our pitches, the provision of a seated stand and a cosmetic face lift is now required. The St Enda’s project is in its infancy and will in time I believe be a welcome addition.

O’SULLIVAN: The major issue here is, of course, finance. We all want the best facilities and great improvements have been made in recent years but there is still a hard road ahead. By supporting the Club Limerick Draw and the various fundraisers throughout the year, our Gaels can proudly play their part in our infrastructural development. I welcome the St Enda’s initiative as it will complement Mick Neville Park as a centre for our academies. The new structure of the Munster Hurling Championship will bring big games to the Gaelic Grounds going forward, and I would see the installation of a covered stand and ancillary improvements in Mick Neville Park as an immediate priority. Progress in fundraising will lead to progress in facilities development which, in turn, will lead to progress in standards.

Given carte blanche power what one GAA rule, regulation or bye-law would you change?

CREGAN: The playing year for most  players ends within the calendar year but this is not the case for all. County champions supply a number of players to our county senior hurling panel and as has been the case in our own county in recent years the playing of the All Ireland Club championship in February and March deprives our county panel of  players who cannot be available for the opening  rounds of the National league. Much emphasis has been placed on securing promotion from division 1B and the present situation does not help our cause. (2) Regarding the All Ireland football championship. If the Limerick fixtures committee decided to have one championship in football  and that all Clubs would play in (NO GRADING) so senior, intermediate, and junior all go in to the  pot, in my opinion that would be farcical. Our 33 team All Ireland football championship is exactly as above. The time has come for grading with promotion and relegation. GAA and GPA have to sort this as weaker counties continue to lose  too many players.

O’SULLIVAN: I would like the see the All-Ireland club championships completed within the calendar year. This would allow for a rest period for players and ensure that county panels have a full hand for the commencement of the National Leagues. St Patrick’s Day is a very important occasion in the GAA calendar and I would propose playing the National Hurling & Football League finals as a double-header in Croke Park on  March 17 annually. Finishing the leagues on this day would also free up more space for club activity. On a playing level, I’d like to see 2 points awarded for a scored sideline cut in hurling - skill should be rewarded. A tightening up on the interpretation of the black card in football would also be a big help.