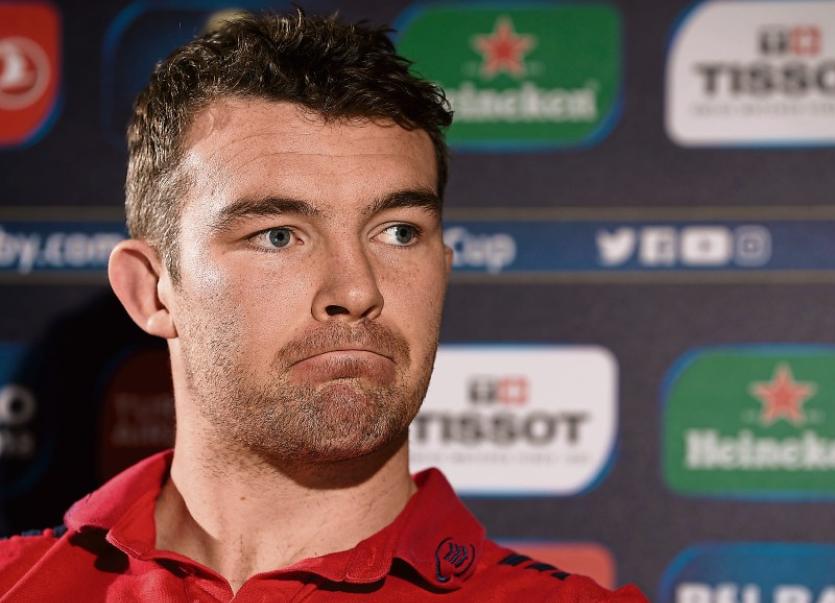 Peter O'Mahony chatting to the media this week

MUNSTER captain Peter O’Mahony insists Leicester Tigers will have no fears over coming to Thomond Park this weekend, despite the thumping the Aviva Premiership side suffered at the venue 12 months ago.

In-form Munster scored a resounding 38-0 bonus point victory over the Tigers when they came to Limerick for the first of their back-to-back pool fixtures last December.

Leicester return to Thomond Park this Saturday, 7.45pm, for a crucial round three Champions Cup fixture, with the sides locked together at the top of Pool 4 on six points each.

Flanker O’Mahony, whose future with Munster remains in some doubt as he considers a possible move to France or England next season, said: “Saturday’s massive. It’s like a mini-competition within the pool, the back-to-back fixtures. They are very unique. Outside of international rugby, you rarely play someone back to back like this.

“It’s always an interesting one, the history we have with Leicester. We have had a couple of incredible game with this, a lot of history. I wouldn’t expect anything other than a huge test this weekend.

“It (Last season at Thomond Park) probably means more to them than it does to us, we’re a long way down the track. Obviously, they will look back and say they don’t want to that happen again, but to be fair it’s probably wrong for me to say that as well, they’re a different bunch even if they have a lot of the same players that were there.

“A lot has happened since then and most clubs don’t look back anyway.

”You have got to be looking forward and a team of Leicester’s quality and standard and the standards that they drive are very high, they’re not going to be looking back on that.

”They will review the game from last weekend and they will want to make improvements and come to Thomond Park and beat us; that’s their mindset.”

Despite the heavy nature of the defeat Leicester suffered at Thomond Park last season, the English side did manage to turn the tables on Munster at Welford Road in the return game eight days later.

Munster and Leicester Tigers will clash in Europe for the ninth and tenth times in the back-to-back fixtures with Leicester currently ahead in the bragging rights by five wins to Munster's three successes.