Limerick Oscar Traynor side pay the penalty in Kerry 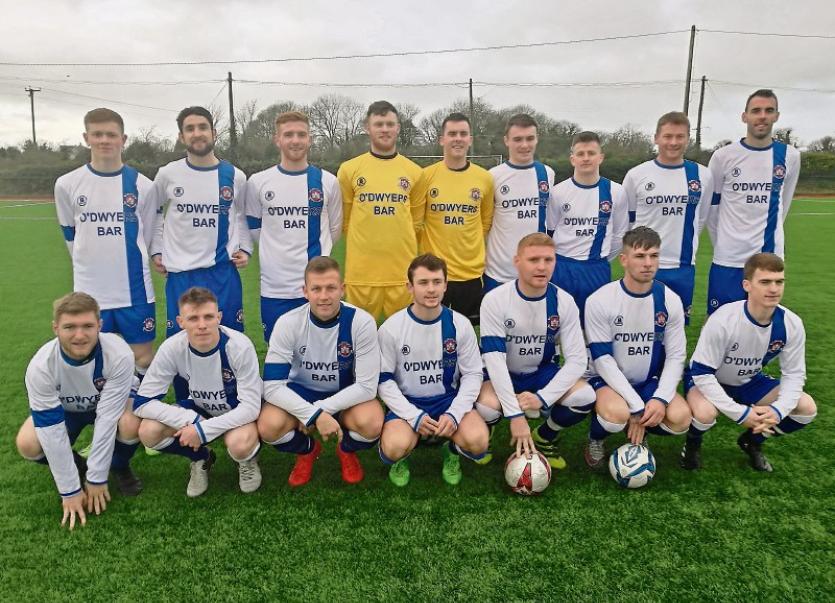 Limerick's hopes of bringing a long overdue Oscar Traynor Trophy back to the City suffered strike one on Sunday afternoon when they fell in a penalty shootout against their rivals in the Kerry League. Kerry DL 1 Limerick DL 1 (Kerry won 4-3 on pens aet)

Limerick will have another chance as the two losers in their group will play off to see who progresses along with the top two to the next stage of the competition.

The safety net may have taken the sting out of Sunday's results but as a proud bunch of players and mentors, no doubt they will relish the chance to make amends in the next game.

As it transpired, the Kerry lads just showed a cooler head in the heat of the shootout to claim their win.

Danny Roche had given Kerry the lead on 15 minutes and Limerick did well to fight their way back into the tie when Shane Clarke scored just on the hour mark.

Limerick played with the wind in the opening half and had the first chance of note after six minutes when Keith Mawdsley went down the wing around his marker and delivered a cut back for the inrunning Darragh Rainsford whose snap shot skimmed the corner of the crossbar.

The chance snapped Kerry out of their slumber and thereafter the home side had the better of the first half.

On 10 minutes James Sugrue, played through by Gary Keane, attempted a chip over the keeper that fell just over the top.

Five minutes later Kerry broke the deadlock. Sugrue took a free kick and picked out Aidan O'Callaghan who whipped a ball into the area. Peter McCarthy's clever step over allowed the ball run to Danny Roche and from eight yards out he blasted home.

Limerick's next threat arrived on the half hour mark. Dermot Fitzgerald's free kick had Kerry keeper Brian O'Connor scurrying across his goal and breathing a sigh of relief as the ball missed narrowly.

Two minutes later Roche jinked his way into the Limerick area and let fly with an effort which was well saved by John Mulready.

Just before the break the home side had a great chance to double their lead but McCarthy wasted the chance as the sides went in for the turnover.

On the resumption, Limerick upped their game as expected.

Five minutes after the restart Darragh Hughes picked out Steven McGann and his superb ball was taken on the chest by Mawdsley before he let fly with a cracking shot that was well saved by O'Connor.

Limerick's pressing paid dividends on the hour mark. Dermot Fitzgerald picked out Darragh Rainsford who delivered a ball in on top of keeper O'Connor. Kieran O'Connell's challenge forced the net minder to drop and Shane Clarke was on hand to knock the ball home.

With 20 minutes remaining McCarthy hit a well struck free kick off the butt of the Limerick goal and at the other end Rainsford and Shane Walsh combined to set up a chance for Clarke that was flashed across the face of goal but the inrunning O'Connell was unable to keep his effort under the post.

Con Barrett looked like he had snatched it for Kerry late on but his well struck shot brought off a stunning save by Mulready sent the game to extra time.

Limerick went close in extra time when Mawdsley fired into the side netting after good work by Colin Daly and Shane Walsh.

As extra time wore on it was obvious that no team wanted to err so chances were few and far between.

So, to the shootout and despite successful kicks by Thomas Clarke, Dermot Fitzgerald and Darragh Rainsford along with a good save by John Mulready, the home side proved just better.

Coonagh Utd completed the Limerick line up in the Open Draw stages of the FAI Junior Cup when they defeated Kennedy Park 4-1 at LIT to set up a fifth round tie next weekend away to Dingle.

The Division 1B League Leaders were favourites going into the tie and while they ran out comfortable victors in the end, they found Kennedy Park a tough nut to crack for much of the game.

Coonagh have a much vaunted front line and they were to the fore on Sunday with all four getting on the score sheet.

However it was further back that the win was earned with Eoin Martin having a superb outing in the middle of the field. Doing the unheralded work without complaint, the Coonagh midfielder time and again broke up the opposition attack to put his own side on the front foot.

Despite plying their trade two Divisions behind their hosts, Kennedy Park started full of confidence. A corner by Keith O'Byrne was just missed at the back post by the hard working Mike Phelan.

Minutes later the visitors were appealing for a penalty when Jason Franklin was tumbled over in the area but Referee John McNamara was per4fectly positioned and waved away the claims.

Aaron Costello was denied the opening goal when his effort was blocked by Park keeper Barry Guerin.

Coonagh opened the scoring after ten minutes when Mark McGrath picked out Ger Myles in the area and he pulled the ball back for Joey Sheehan to finish.

A superb save by Kieran Simmonds denied Stephen McNamara an equaliser but the visitors disappointment was short lived as the next attack produced a goal. Keith O'Byrne played a ball over the top. The Coonagh defence were guilty of ball watching as Jason Franklin raced through to score.

The half time whistle was seconds away when Coonagh centred off and Luke O'Doherty played a ball across the Park defence and Gordon McKevitt racing in from the left wing hit a first time volley low past Guerin, giving the keeper no chance.

Another superb save by Simmonds denied O'Byrne an equaliser from a free kick and his side made it count when they tacked on a third. Super work in the middle of the park by Eoin Martin saw him feed Mark McGrath. The Coonagh striker tried his luck from distance and Guerin seemed to have covered but a cruel slip saw the ball fall kindly for Ger Myles who gratefully accepted an easy chance.

Mark McGrath completed the scoring when he collected from Dave Coffey and fired in from 18 yards.

Kilfrush may well be singing the refrain of the old song "Billy don't be a hero" after their top of the table clash with Coonagh on Sunday morning.

The visiting defenders suffered a torrid time again young Coonagh striker Billy Connors who scored all five of his side's goal in a 5-3 win.

With their opponents weathered out of action, Coonagh took advantage of their game in hand to increase their lead at the top of Division 4 to five points.

They faced a tough test against fellow title challengers Kilfrush and found themselves behind within the first 5 minutes when Darragh Keogh faced one on one with the Coonagh keeper Thomas Myles, coolly dispatched his chance.

Coonagh's response was immediate and lethal. A hat trick inside five minutes gave the League leaders a lead they never relinquished.

The first came after Connors picked the ball up wide right. He quickly spotted the Kilfrush keeper off his line and fired a powerful looping shot into the far corner of the net.

Two minutes later the silky Ray McMahon was the provider when he picked up the ball on the right hand side and with the outside of the boot sent a pin point cross to the back post where Connors was on hand to finish.

The League's top scorer rounded off his early hat trick when winger Sean Kelly went on a powerful run down the right side and played a clinical pass to which he tucked away.

Kilfrush pulled a goal back 5 minutes later through Danny O'Connor and they continued to mount pressure after this but Coonagh continued to look dangerous on the counter attack.

After some neat play between Ger Fitzgerald, Ray McMahon and Sean Kelly, McMahon found himself in on goal. A cool head helped him spot Connors free in the box and he again finished clinically to put Coonagh 4-2 up.

Kilfrush brought it back to a one goal game before the break when Aaron Murphy got the final touch in a crowded goalmouth.

The second half started as the last ended in a tight competitive game. Both teams had chances but nothing clear cut. As the game came into the final 15 minutes Connors found himself in on goal on a couple of occasions but they had to wait until the 83rd minute to complete the scoring as Connors found himself in again and his persistence paid off, with him finding the net for the fifth time on the day and the 20th time this season.

In the Munster Youth Cup a 93 minute goal from Mark Quinlan gave Kilfrush a good win at Regional Utd.

Fairview Rgsbeat Mungret Reg 4-1 with scores from Matt Gallagher (2), Liam O'Sullivan and Danny McCarthy while Pike, despite going a goal behind, hit Corbally for seven with scores from Cian Power (3), Evan Hudner (2), Brian Thompson and man of the match Kyle Duhig.

In Youth League Division One Aisling opened up a four point lead over Pike Rvs thanks to a 4-1 won over Mungret. Ben Kennedy (2), Eoin Murphy and Dylan O'Neill scored for the winners. Evan Barrett replied for Mungret.