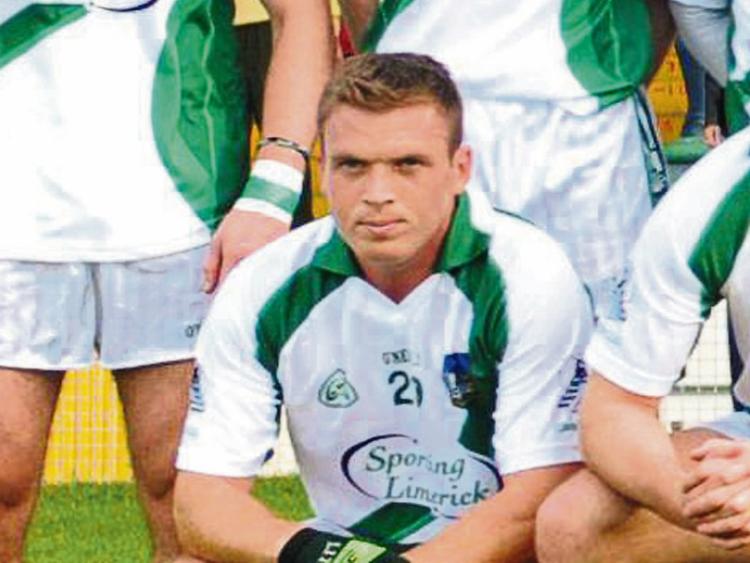 Conall Crowley pictured with Limerick in 2008

When supporters of Kerry's An Gaeltacht research Limerick champions St Senans they will be familiar with the inter-county experience of Conor Mullane, Andy Lane and Ian Ryan.

But An Gaeltacht joint-manager Conall O’Cruadhaloich needs little research when it comes to Limerick football...

Between college in UL and working as a teacher in Gaelcholaiste Luimnigh, Crowley spent much of the last 10 years in Limerick.

He played club and county football on Shannonside between 2006-2009.

A Munster minor football championship winner in 2001 in a full forward line with Colm Cooper and Declan O’Sullivan, Crowley played in the 2003 All Ireland club final with An Gaeltacht alongside O’Se brothers Darragh, Tomas, Marc, Dara O’Cinneide and Aodan MacGearailt.

By 2007 he had joined up with the Limerick senior footballers under Mickey Ned O’Sullivan. His championship debut, as a substitute, came in the Munster SFC quarter final loss to Cork in Pairc Ui Chaoimh.

“I was involved for three years with Limerick but the first year was late starting - my transfer to Monaleen was slower than expected. I was training away but the transfer just went through before we went down to play Cork in Cork and that was the first time I was togged out,” recalled Crowley this week.

”I played three/four seasons with Monaleen - I have to say they were very welcoming and always played football the right way. I’ve no medals from that time but good memories, plenty enjoyment and good friends - Georgie Fitzpatrick and Philip O’Dell were over the team when I started out,” Crowley told LeaderSport.

His time in green and white coincided with Mullane, Lane, Ryan, Diarmuid and Timmy Carroll.

”Four years ago I stopped playing after on-going knee injuries - eventually I was walking around with a pain in my knee. It was mid-season and I stayed on helping out with training and that’s how I accidentally ended up in management,” explained Crowley, who is joint-manager with full back Marc O’Se. Among the selectors is Dara O’Cinneide.

Back in 2008, Crowley was a sub when 19 year old Ian Ryan announced himself to the footballing public with 3-7 in the All Ireland SFC Qualifier defeat of Meath.

“You could see from the very start how comfortable he was on the ball and in my opinion he is one of the best forwards I’ve played with,” said Crowley of Ryan.

”I honestly didn’t look at the other side of the draw until we beat Mallow and when I saw it was St Senans and did some research I was surprised to see him centre back. I can see how that works though because he can read the game and has good feet to deliver and can break forward I’m sure,” said Crowley of the St Senans potential in Sunday’s final.

He adds: ”Conor Mullane would have all the experience to play inside and the brain to make the right runs”.

An Gaeltacht reach Sunday’s final after a provincial semi final win over Mallow.

They have five time All Ireland SFC winner Marc O’Se at full back and Paidi O’Se’ son Padraig at centre back. Current Kerry senior panelist Brian O’Beaglaoich is wing back with another inter-county man Cathal O’Luing at corner back. O’Luing is a teacher in Gaelcholaiste Luimnigh.

In attack Eanna O’Conchuir is a key player.

“We went up to Limerick at the start of the year and did some fitness tests in UL and did some goal setting and planning - Comórtas Peile na Gaeltachta was a big goal for us on the June Bank Holiday weekend. That’s important for us culturally and was a huge win for the club and drove us on for the Summer. Winning the intermediate title has rejuvenated the club and crossing the county boundary heading off to Mallow a few weeks ago brought back great memories of 2001 and 2003 in the Munster club SFC and our journey to Croke Park,” outlined Crowley.

”A lot of our panel were with West Kerry who reached the Kerry SFC semi final and between that, colleges and Kerry inter-county teams we actually see very little of them. We do a little coaching and this season have done more post-match analysis and learn from that - we weren’t in a position to afford video analysis so we bought our own video and do it ourselves now,” explained the manager.

“We have so many away from home and in college. We actually have lads that would have trained with Monaleen or up in Monaleen and down in Cork we have some that were with Bishopstown or Ballincollig. We often meet in Killarney for a mid-week training session.”