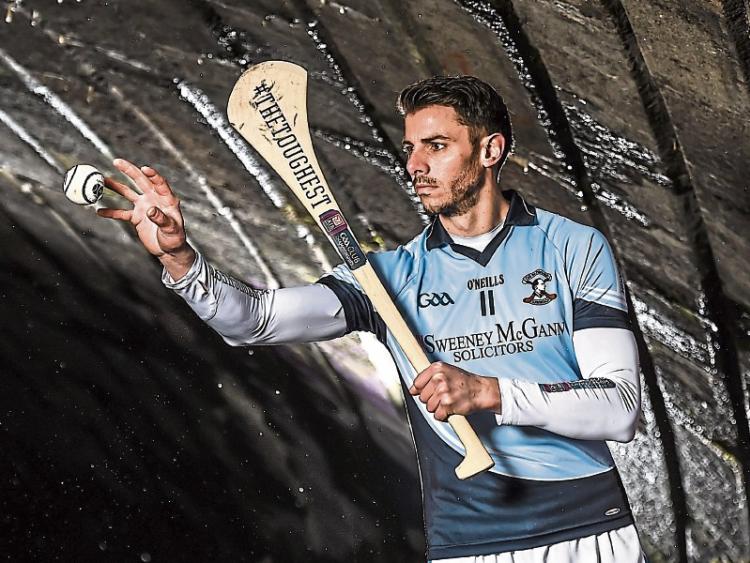 THERE is a wall in the Wasps training ground in Broadstreet Rugby Club that is going to need a new coat of paint and first team physio David Breen is to blame...

The Na Piarsaigh centre forward is almost 18-months with the top English rugby side but continues to clock up the air miles chasing silverware with his native GAA club in Caherdavin.

This Friday, Breen flies into Shannon ahead of Sunday’s Munster club SHC final against Ballygunner in Thurles.

Breen and Na Piarsaigh are bidding to win a fourth Munster title in seven years and extend their unbeaten run in the championship to 11 games.

The former Limerick hurling captain had planned to join up with Warwickshire for hurling training this season but his first trip to Ireland for hurling with Na Piarsaigh came to an early end.

“It was Easter weekend and an ideal opportunity to get home and especially with a league game against Adare. Someone fell on me at the start of the second half. Back I came on crutches!,” recalled Breen this week from his Leamington Spa base in the English midlands.

That broken bone in his ankle meant Breen played only the second half of the final group game against Knockainey in Limerick SHC.

The 31 year old was in the starting team four weeks later in the semi final against Doon.

Across the water, Breen’s Wasps were played away to Exeter Chiefs in the Aviva Premiership.

The game was live on eir Sport and afforded the Wasps players a chance to see their physio in action.

”The WhatsApp group was hopping,” said Breen. Of particular interest, the schemozzle just before half time!

Huddled around a laptop in the team hotel, the live coverage of the Na Piarsaigh-Doon game offered proof of Breen’s sporting ability.

Prior to this, the players and staff of Wasps RFC were only familiar with Breen hurling against a gable end in their training ground and striking sliothars between their rugby posts.

Others like Tom Cruse‏, Tommy Taylor‏, Alex Rieder‏, Marcus Watson and Paul Doran Jones‏, are among those taken aback at Breen’s hurling.

“One of the other physios played hockey at a pretty high level and was interested so I introduced him to hurling. It’s great because I would have six or seven sliothars and puck them over the bar and have to go retrieve them but now to have someone pucking them out from behind the goal is great and it helps keep my eye sharp and helps to be running onto a sliothar for first touch and things like that,” outlines Breen of his hurling training.

“I have my own training routine and Alan Cunningham gave we some ball wall sessions and drills. The last thing I want is to be taking the place of someone else who is training away at home so if they are doing three nights training, I do three nights or even four,” said Breen, who was physio with Leinster rugby before the switch to Wasps.

”It’s (missing collective training) something that plays on my mind a little but I am pretty happy with myself physically and just try to get enough hurling into myself as possible/ It’s down to management whether they think I am up to pace or not. They said to me that I am doing the work that I say I am then I should be ready.”

Keeping Na Piarsaigh happy is one thing, but Breen is also mindful of his employers Wasps.

”When I was interviewing they were aware that I played – last season was unfortunately short for us so there was not much of an issue but the boss is pretty accommodating. I want to enjoy it for as long as I can and I could just as easily go over on a ankle playing golf or 5-a-side soccer,” explained Breen, who is playing adult hurling with Na Piarsaigh since his Leaving Certificate year of 2003/2004.

”A huge motivation for me and a few others is that we have been through it all and seen where the club has come from and how is has evolved – the whole club has developed so much and matured. I can’t say I’ve seen the real bad days but the days when we weren’t at the top end of the senior championship. Some of the younger players know nothing else only the club of the last few years. Maybe the early end to the season last year was good for them to see a bit of where the club has come from,” he outlined.

On Sunday, David is likely to be one of just six players that remain in the Na Piarsaigh team from the side that debuted in the Munster club SHC back in 2001 – against Ballygunner in Walsh Park.

”Even look at the team from two years ago and you can even see how many new players have been blooded. That’s a credit to management because they are 100% aware that you need to continually evolve. Also it’s a sign of the competition that there is in the team and it’s that competition that drives everyone.”

The motivation is clear.

”We were all disappointed with how last year went for us. There are all the excuses but we were beaten in the first two rounds and by big rivals of ours – guys wanted to put that right.”

He adds: ”As soon as you win an All Ireland or even a Munster title, it’s not just the teams in Limerick but everyone that wants to beat you.”

One All Ireland title, three Munster titles and four Limerick titles and all since 2011 and yet Na Piarsaigh are hungry for more silverware.

“Maybe down the line it will hit you but right now we are of the mind set that if you have a team of certain quality then you have to turn that potential into medals. Look at the Kilkenny teams of a few years ago and they simply wanted to win everything. What we have are good, ambitious, hungry players,” said Breen.

This weekend, he makes a flying visit to Ireland but hopes to return to training on Monday morning with silverware rather than crutches.

”I fly out at 7.00 on Sunday evening. Dad will be waiting for me outside Thurles in the car and straight to Shannon. It’s a consequence of the situation I find myself in but hopefully when I am home next there will be still plenty nights to celebrate.”