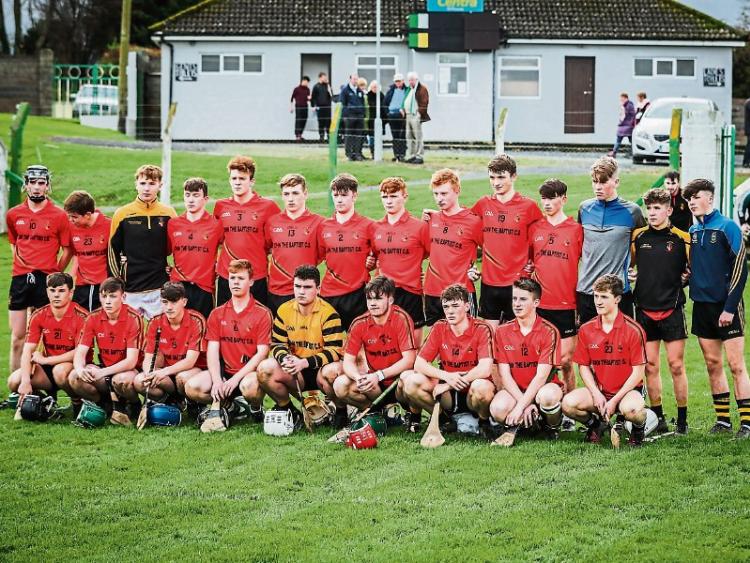 JOHN the Baptist Community School, Hospital, were forced to give second best to a powerful St Colman’s College, Fermoy side in their Dr Harty Cup group fixture at Kilfinane on Wednesday afternoon.

However, Hospital had already secured their place in the quarter-finals of the Dr Harty Cup prior to throw-in following group victories over Colaiste Iosaef, Kilmallock and Blackwater Community School, Lismore.

However, Wednesday afternoon’s 3-16 to 0-10 defeat to a slick St Colman’s outfit means the Limerick side will face a group winner in the quarter-finals.

That draw for the quarter-finals will take place in mid-December with those games going ahead on January 10, 2018.

Backed by a stiff breeze in the opening half, a physically-imposing St Colman’s side blitzed their opponents with 1-8 without reply inside the opening 17 minutes.

Hospital opened their account with a pointed free from their top scorer Dylan O’Shea, of Garryspillane, in the 18th minute.

While O’Shea added a second point from play soon after, John the Baptist were stung by a second St Colman’s goal from Padraig O’Leary after 20 minutes.

The Cork side led by 16 points at half-time, 3-11 to 0-4, when Conleith Ryan fired home their third goal just before the break.

Padraic Wixted and an O’Shea, free, accounted for the John the Baptist scores.

John the Baptist actually succeeded in outscoring their opponents by 0-6 to 0-5 in the second period. However, by then the outcome of the game was no longer in doubt.

O’Shea added two further points from placed balls, as did substitute John O’Donnell, while Ryan Tobin and Brian O’Grady also pointed for the Limerick side in the final quarter of the contest.