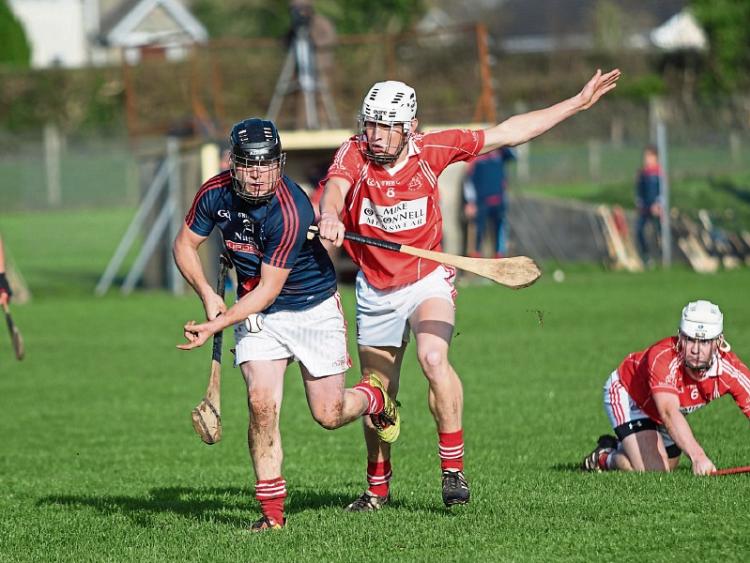 Ian Gardiner, Bruff, gets the ball away despite the attention of Killian Ryan, Mungret St Pauls

It finished 0-13 each in Ballyagran.

It took three games before St Patricks beat Kilmallock to capture the JAHC title and now Bruff and Mungret will have to meet for a second time this JBHC decider.

This final was a repeat of the 2012 decider and Mungret St Pauls looked on course to avenge that 1-11 to 0-11 defeat until the last gasp scores.

Mungret set the early pace and had points from play from teenager Liam Harrington and the experienced Denis Giltenane to lead 0-3 to no score after seven minutes.

But it was Bruff that were to bring a 0-8 to 0-4 lead into the half time break with Mungret going 22-minutes of the half without a score after their early points.

Bruff’s account was opened in the eighth minute by captain Paddy O’Leary.

Tony Burke and James Meany had points from play as the men from the south went ahead for the first time, 0-4 to 0-3 with 21-minutes played.

In the final minute of the half Mungret ended their long wait for a score with Giltenane pointing a free.

Two O’Leary scores – one from play – in the final exchanges ensured a four point half time advantage for Bruff, who wore navy due to a colours clash of red and white.

The lead was stretched to five points on the resumption with former inter-county footballer John Cooke pointing.

Bruff were to score just two of the next 11 scores as Mungret got on top.

Giltenane and Colm Morarity set the ball rolling with successive points from play.

O’Leary hit back with his third from play in the final but Mungret were now winning many battles across the field.

Frees from Giltenane either side of a Harrington point from play had the lead down to a single point at the mid-point of the second half, 0-10 to 0-.

Cooke stopped the Mungret momentum but it was only temporary.

Harrington’s third of the day and a fine point from the right sideline from James Roche had the final level at 0-11 each with 50-minutes played.

Giltenane then pointed Mungret ahead with his third from play and when he added a score from a free they city champions had a two point lead the final was entering injury time.

Two minutes of added time were played when a Burke free ended 15-minutes without a Bruff score.

Then, almost 90-seconds later and in the fourth added minute, Burke levelled to ensure a replay.