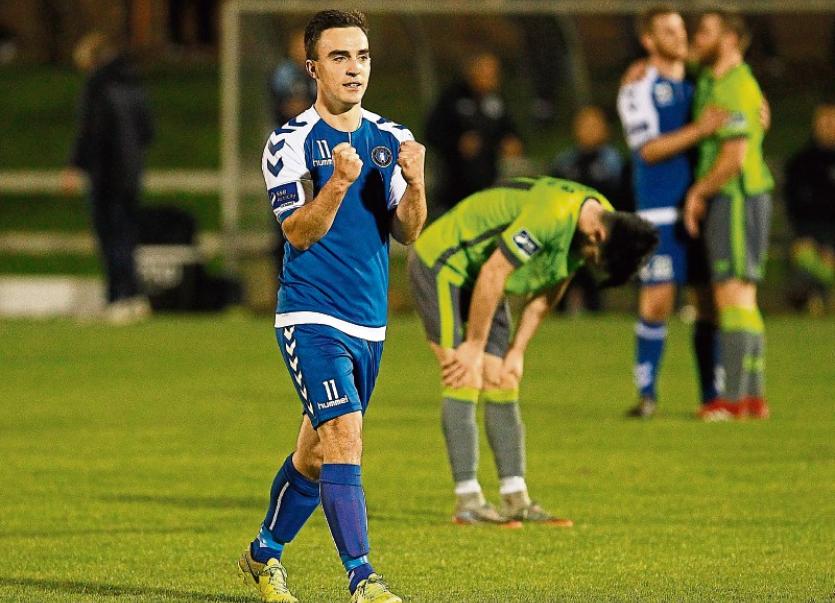 Shane Tracy has re-signed for Limerick FC for 2018

SHANE Tracy will play for an 11th consecutive season for his local club Limerick FC having put pen to paper on a deal for 2018 on Saturday night.

Versatile 29-year-old Tracy enjoyed his Testimonial in the past season having first signed for the club in 2008, and in his left-back role became a key figure in Limerick’s safe passage to SSE Airtricity League Premier Division safety.

Indeed, his sole goal of the campaign, a wonder free-kick in the 2-1 win over Cork City at the Markets Field in September was perhaps Limerick’s most crucial strike of 2017.

The former Wembley and Arsenal youngster – whose only other League of Ireland club was Galway United where he spent a short stint – has collected two First Division-winning medals with the Shannonsiders.

Tracy said he is delighted to sign on with the Blues once again and play his part.

“It feels good to be back for another year,” Tracy said

“We were obviously happy to secure safety last season, and now I’m looking forward to starting up again in January – it’s a familiar feeling.”

Tracy was the second signing made by Limerick FC on Saturday as the Blues also confirmed the signing of striker Danny Morrissey who spent the past season at Finn Harps.

Twenty three-year-old forward Morrissey was previously at his hometown club Cork City where he made over 60 Premier Division appearances, while playing the leading role in sealing their 2015 FAI Cup final place.

Shane Tracy says hanging up his boots from the professional game did cross his mind for a moment, but that the hunger and his competitive edge still burns inside.

“I’m working full-time too, so I had to take everything into consideration. I was always more in favour of re-signing.

“It will be my objective to play week in, week out – I wouldn’t have signed if I felt I couldn’t keep going and keep competing. I’ve been like that throughout my career – I want to compete, and next year will be no different.”

Tracy says retirement will come when the time is right but that his focus remains firmly on Limerick and helping them in what will be an extremely competitive ten-team Premier Division next year.

“I’m just going to focus on the season ahead and not look past that.

“It’s an old cliché but that’s all the focus is on. We will see how the season goes and not worry about anything beyond that.

“Last year, you could see the quality of the teams in the league and it will be even more competitive next season with Waterford coming up – they have investment behind them, which always helps in this league.

“But that’s what you want – you want to be playing against the better teams and in better stadiums, and you want to push yourself as much as possible.”

Manager Neil McDonald also expressed his delight at Tracy’s decision to commit to the club for yet another year.

“Shane has been a credit to himself and his family, representing Limerick for over ten years. He had a well-deserved Testimonial,” McDonald said.

“Shane got himself back in the team by training really well, waiting for his chance and showing what he can do. We hope he can contribute more on the pitch next season than this year, but that is up to him.

“His attitude has been top-class and it’s great to have a Limerick player through and through in the squad.”