Rathkeale and Ballingarry bid for FAI success in Clare 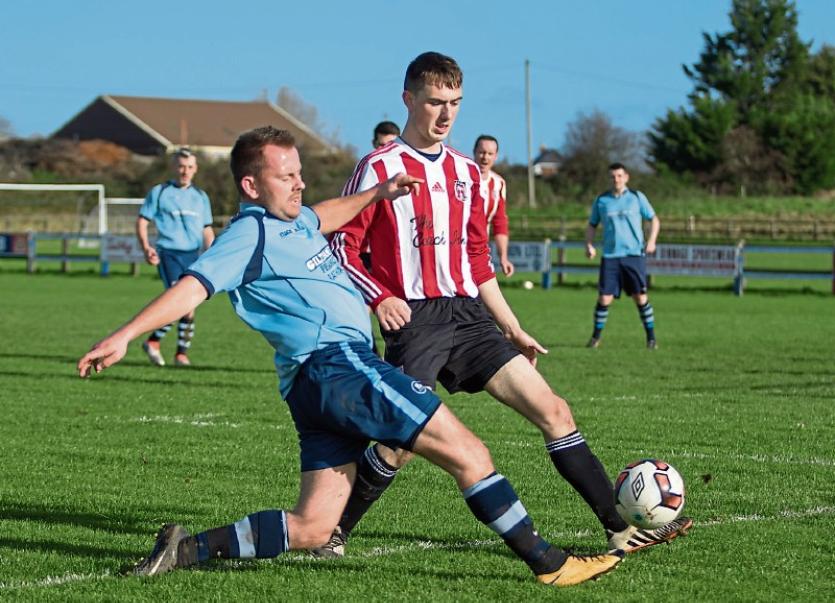 Thomas Quilligan, Rathkeale, and Ger Garvey, AK United, reach to get to the ball in their sides clash in the Munster Junior Cup 2nd Round in Rathkeale

Rathkeale and Ballingarry travel to take on Clare Premier teams on Sunday as they bid to join Carrig Celtic and Glin Rovers in the FAI Junior Cup fifth round open draw.

Having won the Premier Division in Clare last season, Shannon Town qualified for the Munster League Champions Trophy this season but they made their exit from that competition last Sunday when they lost 2-0 to St. Michael’s in the semi-final. They are managed by Donal McGee who steered Ballynanty Rovers to a couple of Munster Junior Cup finals. They have three players who are part of the Oscar Traynor panel that is going for a three-in-a-row of Oscar Traynor titles this season, namely, right-back Stephen Carroll, Gary O’Connell and striker Colin Scanlon, who entered club folklore by scoring a hat-trick when Shannon Town came from 2-0 down at half-time to win the title with a 3-2 victory against then reigning Champions, Newmarket Celtic, on the final day of last season. Shannon are in a good position to defend their title as they have won five and draws one of the six games played to date.

Shannon Town won’t be lacking in confidence but neither will Ballingarry, who are unbeaten in all competitions this season and are top of the Premier Division after their 2-1 win away to Newcastle West Rovers last Sunday. Manager Gary Shanahan hopes to have Aidan Morrissey and Peter Ryan back in action and that will be a big help as he has put a lot of reliance on Youths players this season and Ballingarry could have up to five players involved with the Limerick Desmond Youths side that plays Cork Youths in Ringmahon on Saturday.

Ballingarry will do their utmost to preserve their unbeaten record but may fall just short on this occasion.

Though still a formidable force, Avenue United have been overshadowed in Clare in recent seasons by Newmarket Celtic and Shannon Town. Their best-known player is goalkeeper Barry Ryan, who played League of Ireland with UCD, St. Patrick’s Athletic and Limerick FC.

Rathkeale will be without Shane Doherty and the Lyons brothers as they will be playing with Adare in the Munster Senior Club Football Championship against Nemo Rangers. However, with Declan Nash still banging in the goals up front, in-form Rathkeale should be able to overcome this tricky assignment.

The Weekly Award this week goes to Paul Downes of Newcastle West AFC for scoring five goals in the 7-1 victory away to Adare United in Division 1. Downes will go into a draw with the other Weekly winners for a €100 voucher from Adrenalin Sport of Abbeyfeale and Newcastle West at the end of the season.