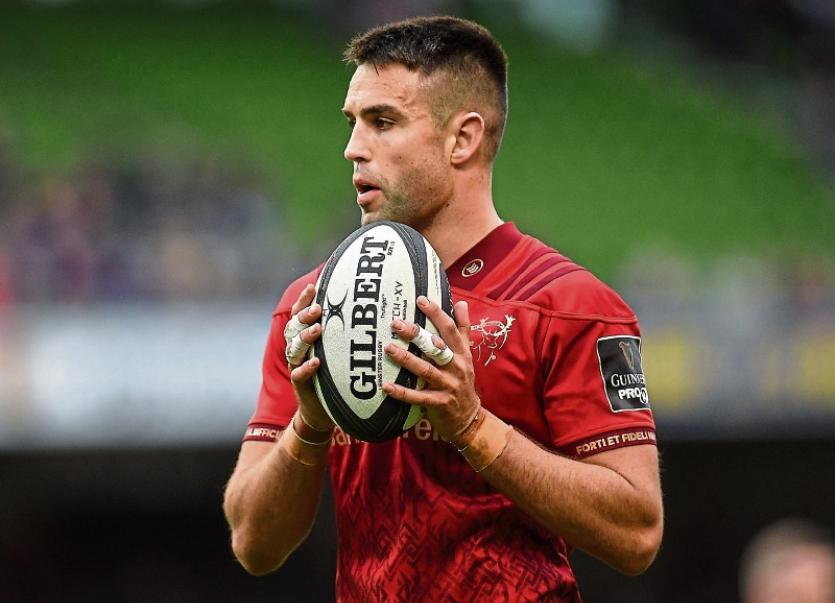 Limerick man Murray, the only player in the Northern Hemisphere to have scored four tries against the All Blacks in Test matches, was honoured at the gala awards evening, hosted by Gavin Krenski and Rory Sheridan of Guinness, and Chairman of the Rugby Writers of Ireland, Gerry Thornley.

Awards were presented to Munster Rugby, Claire Molloy, Cork Constitution and Michael Kearney, and Colin Patterson was inducted into the Guinness Rugby Writers of Ireland Hall of Fame at the event.

Murray was delighted to receive the accolade, which was voted for by the Irish rugby media.

Murray said: “It's an honour to win the award. Every award is nice, it's lovely, isn't it? I can't lie about, it's nice to get these things.

“You have to be realistic about it, you play in a good team and then you get credit but it shows you that there are good squads to be involved in at the moment.”

The Dave Guiney Team of the Year went to Munster who showed remarkable resilience, and determination following the huge loss of Anthony Foley, to reach a Champions Cup semi-final and a Guinness Pro12 final under leadership from Rassie Erasmus and his team.

Munster now have the distinction of having played the most Champions Cup games - 158 -  in Europe, and hold the record for the most consecutive wins at 13 in the 22 years of the competition.

Conor Murray commented on Munster’s Award: “That's great. Actually, watching the Axel documentary recently kind of brought it all back about how big a year it actually was.

“I know we got to the Guinness PRO12 final and we lost to Saracens in the Champions Cup semi but it was a good year. It's not silverware but it's definitely a big step in the right direction.

“Looking back on that it was a tough year but I think we did really well and it's another honour to get an award like that.”

Rory Sheridan, Head of Partnerships for Diageo, Europe said; “Guinness has a long and proud heritage with Irish rugby at both international and club level.  We are committed to supporting the sport and its values of commitment perseverance and extraordinary passion.

“Conor Murray displays all of these traits, particularly over the last year where a series of brilliant performances for Munster, Ireland and the Lions have seen him emerge of one of the game’s very best players.

“We are delighted to see him honoured here tonight by the Rugby Writers of Ireland who we are proud to have supported for more than 20 years.

“The Guinness Rugby Writers of Ireland Awards are distinguished by the fact that they celebrate not just our very best players but also recognise those who work tirelessly in many different guises to maintain the game we hold so dear.

“Guinness are delighted to be a part of what is one of the highlights of the Irish rugby calendar and to welcome so many of our past and current players to the Guinness Storehouse to acknowledge their achievements.”

The former Galway minor footballer is also an Accident & Emergency doctor as well as playing flanker for club Bristol. Molloy had previously captained the Ireland Women's Sevens team during the 2013 Sevens Rugby World Cup in Russia.

On receiving the award, Dr Molloy said: “It's a huge honour to receive the award and be recognised. It's very humbling and it's a product of the people I've been lucky enough to play with and to be coached by over the years, the experiences I've taken from them over the years.”

She continued, "It was a year of mixed results, we had a very successful Six Nations even though we didn't win at the end, we got to a Grand Slam match which was the first one we'd been in since 2013.

“From a sluggish start to the Six Nations, we went on to beating France at home and faced England in the decider was a great outcome.

“Hosting a home World Cup was an amazing experience and the crowd, everything that came with it was great to be part of.”

Cork Constitution was acknowledged Club of the Year marking an incredible season with no fewer than four trophies added to their collection of silverware: their first Ulster Bank League Division 1A win since 2010, a fifth successive Bateman Cup title, a fifth successive Munster Senior Cup, and the Cork Charity Cup.

The Tom Rooney Award awarded to a person who has made a significant contribution to rugby in Ireland was awarded to Michael Kearney. Kearney spent five years from 2012 to 2016 as Manager to the Irish Men’s Team.

During his time with the national team, Ireland secured a first Test Series win in the Southern Hemisphere in Argentina in 2014, back-to-back RBS 6 Nations titles and a first ever Test victory in South Africa.

Michael was widely credited for providing strong leadership and direction for the national team and alongside, first Declan Kidney and then Joe Schmidt, creating a team environment that has driven the on-field success for Irish Rugby over the last number of years.

Michael also held similar roles with Leinster and the Ireland Under-20s prior to joining the Irish Senior set up and is also a Past President of Landsdowne RFC.

Colin Patterson was inducted into the Guinness Rugby Writers of Ireland Hall of Fame.  Patterson who played his club rugby for Instonians and represented Ulster won his first full cap for Ireland against New Zealand in 1978.

He went on to win eleven caps for Ireland and scoring five tries during his international career. He was forced to retire from rugby prematurely when he suffered a serious knee injury touring with the Lions to South Africa in 1980, having played as scrum half in the first three tests.