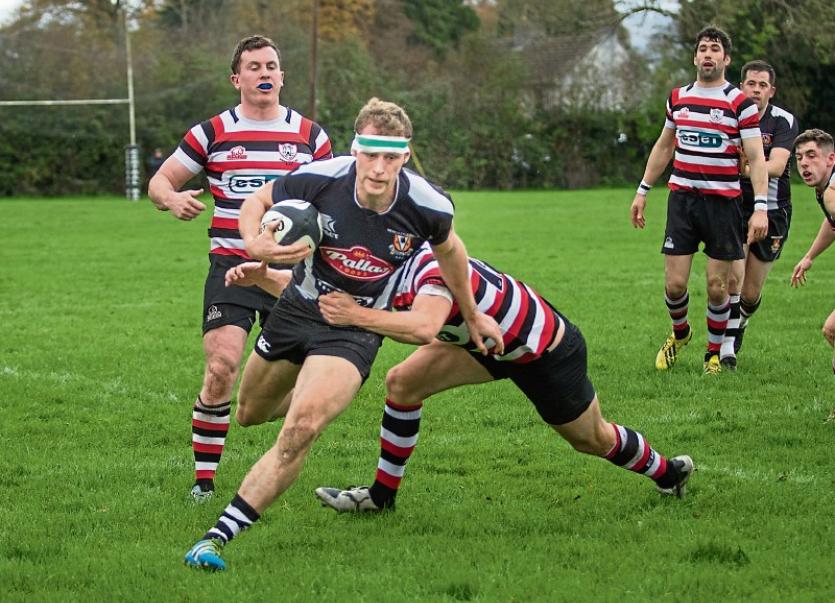 Damien Kelly, Newcastle West, looks to get past Richard Dunne, Enniscorthy, during their All-Ireland Junior Cup game in Cullinagh

NEWCASTLE West RFC powered their way into the quarter-finals of the Ulster Bank League All-Ireland Junior Cup, thanks to a thrilling 30-25 victory over Enniscorthy RFC at Cullinagh.

Newcastle West recovered from a 10-0 first half deficit on Saturday to score three excellent tries and secure their place in the last eight at the expense of the two-time All-Ireland Junior Cup winners and last season’s beaten finalists Enniscorthy.

This is the 13th season of the competition with Newcastle West returning to action in a quarter-final fixture on November 11.

After falling 10 points down, resilient Newcastle West rallied with a fine try from Dave Foley which was set up by Sean Herlihy’s crossfield kick. Herlihy also converted to make it 7-10.

The Co Wexford side responded with their second try of the game soon after. However, a Timmy Kelliher penalty for the home side reduced the visitors half-time lead to 15-10.

Newcastle West made the perfect start to the second half when Darragh Tracy got in on the try-scoring act with Herlihy’s conversion making it 17-15 to the home side.

The home side moved further clear with Herlihy kicked a further penalty on 50 minutes and an opportunistic try from Brian O’Sullivan on the hour mark, again converted by Herlihy, helped Newcastle West into a sizeable 27-15 lead.

However, home supporters’ nerves were settled just on full-time when Herlihy kicked a match clinching penalty goal to bring his haul of points for the game to 12.