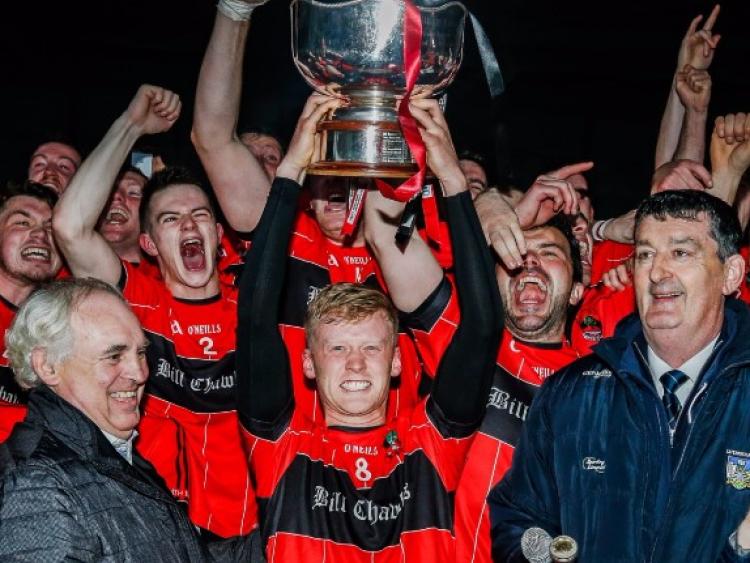 ADARE are Limerick SFC winners for the first time ever after this Sunday’s 2-10 to 1-10 county final win over Newcastle West.

Adare were 20/1 outsiders from the start of the championship and appearing in just a third ever final.

An injury time goal from Jack English sealed the title in the Gaelic Grounds for the Harry Gleeson managed side.

Adare now progress to the semi final of the Munster club SFC where they play Cork’s Nemo Rangers.

Man of the Match Hugh Bourke kicked 1-4 of their first half tally with brother Robbie confirming a three point interval lead with an injury time point and one just before that from play.

A Hugh Bourke point from play opened the scoring after 90-seconds and he added another from a free two minutes later.

But by and large it was Newcastle West that started the better and were 0-4 to 0-2 ahead with Stephen Kelly and Jamie Lee on the mark from play.

Lee and Iain Corbett had successive points and the men in black and white were 0-6 to 0-3 clear by the mid-point of the half.

But they didn’t score again and were to end the half with six wides, while Adare had just one.

The all-important goal in the first half came in the 17th minute from Hugh Bourke.

But six minutes into the second half Iain Corbett had a Newcastle West goal to level the final for a fourth time.

Back came Adare with Mikey Lyons, Hugh Bourke and Lyons again on the mark.

Then in the first of four minutes of injury time it looked as though Paul Hannan was the Newcastle West hero as he put them 1-10 to 1-9 ahead.

But up popped Jack English with a cracking goal when others would have opted for a point.