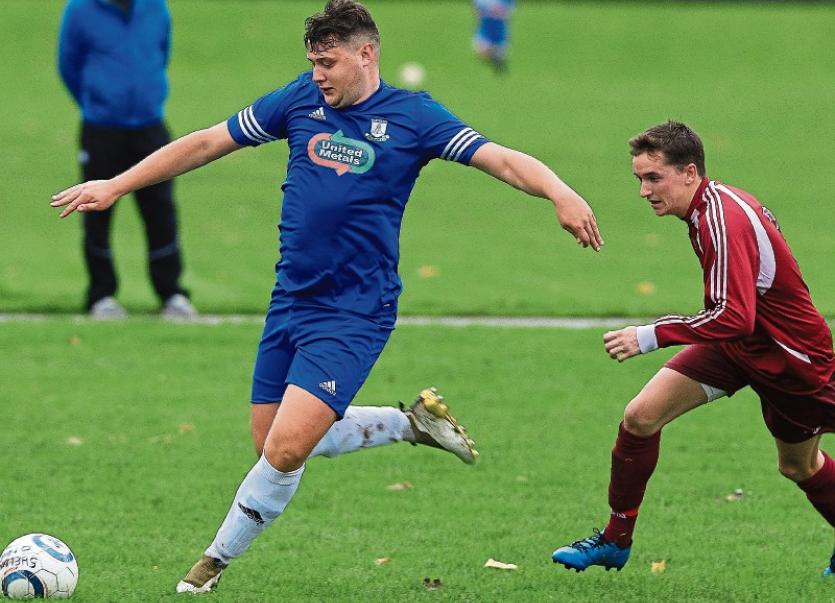 Man on : Jack O'Donovan clears for Shelbourne during their FAI clash with Summerville last weekend

The FAI Junior Cup continues this weekend with some of the stragglers looking to join those already sitting pretty in Round Four.

Current Premier League leaders Janesboro are favoured with home advantage against Division 1A side Cappamore.

A defeat in their opening game with Fairview produced the best possible response from the County side who have gone 11 games unbeaten since.

Cappamore have yet to meet a team the calibre of ‘Boro’ so they will be keen to see how they are shaping up to the best.

Janesboro made light work of opening a five point gap at the top of the League when they defeated Moyross 4-1 on Sunday. It's a case of who is going to stop them really.

Shane Clarke will be back to start after his exploits with the Irish side last week when he was voted best Irish player of the Quadrangular tournament in Glasgow.

It was Niall Hanley's turn to steal the goal scoring limelight last weekend but the Premier side possess dangers all around the park.

Cappamore Celtic should not be taken lightly but may yet be a way off matching the home side.

Nenagh FC halted a poor run when they came from behind to beat Kilmallock on penalties in the Tuohy Cup last weekend. They should continue that rejuvenation this weekend when Croom Utd visit the Tipperary venue.

Geraldines and Coonagh Utd was called off last weekend flipping home advantage to the Division 1A side. Coonagh Utd are joint leaders of Division 1B and they are up against one of the top sides in Division 1A in Geraldines in. Could produce a cracking tie.

There are three games down for decision in the PJ Matthews Premier League.

The top game is Pike Rvs v Regional Utd at the Pike Club. Regional currently lie in second spot and if they should win this one will be just two points behind Janesboro.

Regional have often flattered only to deceive but this season they have already draw with Janesboro and Nenagh and beaten Carew Park so may prove a different proposition.

They won ugly last weekend beating Murroe 2-1 in the FAI Junior Cup and after 13 games only two defeats, to Fairview in the Tuohy and Charleville in the MFA, blot their copybook.

Pike, on the other hand, by their own standards, have not been firing on all cylinders.

The club are hoping a change of Management might change their fortunes although a 5-0 win over Mungret in their last outing was not a real test. Sunday should tell us more.

Ballynanty Rvs are another side quietly going about trying to haul Janesboro in. They advancing in the FAI on Sunday beating Hyde Rgs 4-2.

Once they bed Joel Coustrain into the side they will be serious contenders for any competition they play in.

Kilmallock played well against Nenagh but could not put the game to rest when leading.

Charleville versus Holycross gives both of last season's promoted sides a chance to record their first win in the League.

Both have found the going tough but the cup games of the last few weeks has given them a chance to get back to winning ways.

We have to wait and see who carries that form into their League game but don't rule out a draw.

In Division 1A the winners of the Summerville V Murroe tie will move just two points behind the second promotion spot. Both teams suffered FAI defeats last weekend so we need to see who recovers best.

The Southill derby between Southend and Hill Celtic always attracts the crowds and this Sunday's game should be no different.

In the FAI under 17 Cup Lisnagry take on Caherdavin in a first round tie while in the second round Kilfrush host Mungret Reg, Ballynanty Rvs are at home to Holycross, Aisling welcome Fairview Rgs and Corbally Utd host Regional Utd.

Tonight (Wednesday) sees the Tuohy Cup continue with a mouth watering clash between Ballynanty Rvs and Janesboro at Jackman Park (Kick off 7pm). The sides have met twice already with Boro taking the honours by a single goal on each occasion. Expect it to be equally close.