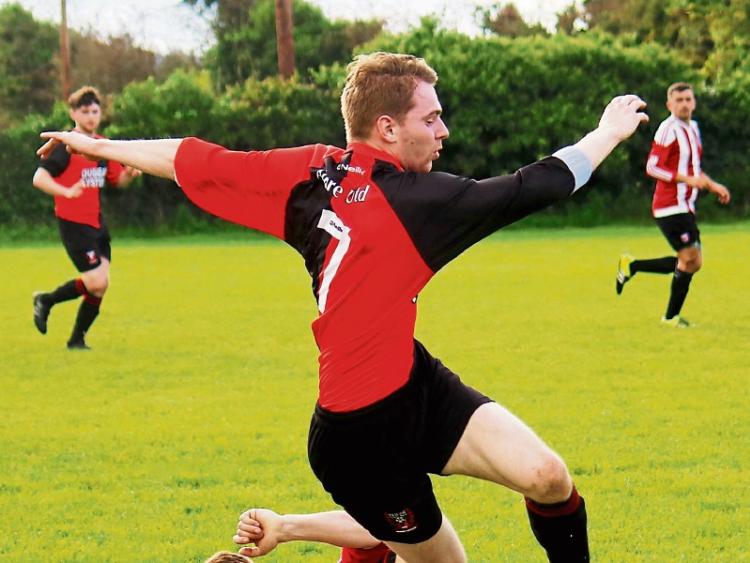 Riedy Cup holders Shountrade got their defence of their title off to an excellent start when they won 7-2 at home to St. Ita’s.

Tim Frawley led the way with a hat-trick and he was joined on the scoresheet by Mark Mullane, Denis Hayes, Brian Hannon and Denis Dunworth. The Ita’s goals were scored by Neil Casey and Shane Butler.

Bally Rovers were also in free-scoring form, winning 5-2 at home to Askeaton, who were ahead twice. Conor O’Shaughnessy scored the first equaliser, while Eoin Breen scored the second equaliser and then put Bally 3-2 in front. They never looked back after that, with further goals from O’Shaughnessy and Stuart Byrne.

Ballysteen won 3-0 away to Knockaderry but the victory wasn’t as convincing as the scoreline may suggest as all three goals came in the last three minutes of the second period of extra-time, the first of them from the penalty spot.

Conor O’Shea, Mike Murphy and Kevin Moore were the scorers for Carrig Celtic B in their 3-1 victory away to Glantine B.

The game between Abbeyfeale United B and Breska Rovers was called off as a mark of respect to Abbeyfeale United legend, Dee Harnett, who died suddenly on Wednesday at the age of 54 and was buried on Saturday. As befitting such a unique character, Dee was given a great send-off and he will always be fondly remembered.

Broadford United B are three points clear in Division 3 after coming from behind to win 3-1 in the top-of-the-table clash away to Creeves Celtic, for whom Richard Hayes opened the scoring in the 38th minute. Broadford B equalised in the 42nd minute and scored the winner in the 71st minute.

It was 1-1 after 61 minutes between Avenue United and Askeaton in the first round of the FAI u-17 Cup when the game was abandoned due to an injury to Dylan Moloney. Thankfully, he hasn’t broken anything and we wish him a speedy recovery.

Youths Division 1 leaders, AK United, had to settle for a 2-2 draw at home to Broadford United. Their goals were scored by Gareth Sparling and Emmet Moore.

Ballingarry maintained their 100 percent start in Youths Division 2 with a massive 9-0 victory away to neighbours Granagh United. It was 4-0 at half-time, the goals scored by Pa Gallagher (2), Josh Quille and Mark Hayes. In the second-half, Gallagher scored two more, one from the penalty spot, with the other goals coming from Adam Shanagher, Michael Southgate and an own goal.

Shountrade are on full points after two games after winning 2-0 away to Kilcolman Rovers with goals from Barry Lenihan and Aaron Hogan.

Mountcollins got off the mark with a 5-2 victory away to Ferry Rangers, whose goals were scored by Bobby Wrenn and Shane Quinn.

There are three more Munster Junior Cup first round games down for decision on Sunday, with Premier Division sides expected to advance in all three.

The League tables should offer a good indicator to the likely outcome of this tie. Abbeyfeale United are leading the Premier Division, Kildimo United are joint bottom in Division 1. Abbeyfeale reached the open rounds last season and it will be a major shock if they don’t take a step towards a repeat on Sunday.

Having won two trophies last season and unbeaten in Division 2 this season, Shountrade are clearly a team on the up and will relish meeting the challenge posed by their more-exalted neighbours. However, Rathkeale’s experience at playing at a higher level should see them through.

Glin Rovers are enjoying a good season in the Premier Division so far, just four points behind leaders Abbeyfeale United with a game in hand. They will be mindful of the fact that they required extra-time to win at home to Ballysteen in the preliminary round but that lack of complacency should help to account for Glantine, for whom promotion from Division 1 is probably the top priority this season.

The Weekly Award this week goes to James Guinea, whose hat-trick enabled Newcastle West Rovers to come from 3-1 down to win 4-3 away to Newcastle West AFC in the Munster Junior Cup last Sunday. Guinea will go into a draw with the other Weekly winners for a €100 voucher from Adrenalin Sport of Abbeyfeale and Newcastle West at the end of the season.