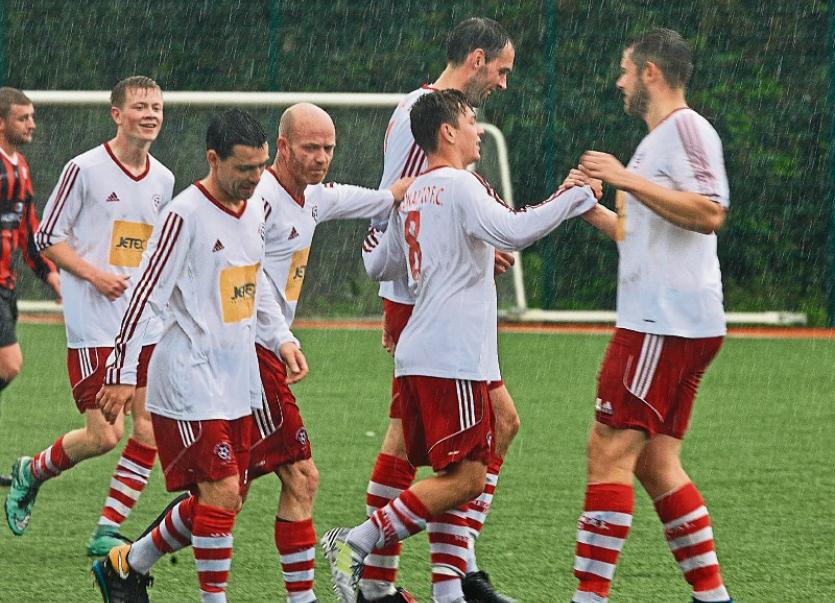 Regional's Declan Cusack is congratulated by fellow players after scoring against Holycross in the league. Regional face Murroe in the FAI Cup this weekend

The FAI Junior Cup third round is scheduled for this weekend, however only three Premier league sides are listed for action.

Regional Utd, lying second in the Premier League, face a tricky assignment when they host a Murroe side who have won eight of their nine previous games.

The county side are in flying form led by veteran striker Anthony Cusack who is their top scorer with nine goals.

Regional are unbeaten in the League but have lost twice this season, both were in cup fare, so Ray Lynch will be hoping his side get that hex off their back when they host the Division 1A side.

The Dooradoyle side's insistence on playing the ball out from the back is admirable but as other teams become aware of the system they may need to be more flexible.

Ballynanty versus Hyde, for those old enough, brings back memories of some great FAI battles over the years.

While Hyde's star has waned somewhat over the decades, they showed in the Munster Junior Cup that they have a side capable of causing an upset by beating Aisling Annacotty 6-3. Consistency is Hyde's problem as they showed by a follow up defeat to Cappamore. They returned to winning ways last weekend beating Moyross B 3-2. Hyde meet a Balla side on Sunday hell bent on a good run in the National tournament.

With big name signings like Joel Coustrain, Shaun Kelly and Clyde O'Connell to add to an already strong squad, they have given indication of their intentions.

A 2-1 win over Nenagh last Sunday will have added to their swagger and it's hard to see them getting caught out like Aisling.

Holycross also face a potential banana skin in Caherconlish. The Division 1A side blow hot and cold depending on players available but with a full compliment they are a challenge for any side.

After eight straight defeats in the Premier League, Holycross have won their last three games and hopes are high it will have given them a well needed boost.

Div 1B leaders Coonagh Utd take on one of the top sides in Division 1A in Geraldines in what could be the game of the weekend.

The Coonagh front line is well flagged but Tom O'Grady and Co., will be well up for the challenge.

Hill Celtic's only defeat in the last six games was inflicted by the LDL and they will be looking to keep that form going when they host Pallas Utd.

Kennedy Park are in fine form and are expected to account for Northside while home advantage gives Kilfrush a slight edge over Caledonians.

Summerville impressed for large parts of their game with Fairview last weekend and they visit a Shelbourne side, top of the table in Division 2A, who turned in their worst result of the season last weekend going down 5-1 to Regional B.

It could go either way as could the clash of Caherdavin Celtic and St. Patricks.

Janesboro will be expected to restore their five point lead at the top of the PJ Matthews Premier League when they host a struggling Moyross XI at Pearse Stadium.

After a dramatic last minute winner against Rathkeale last Sunday, Aidan Ryan and Shane O'Hanlon would like something less stressful this weekend and their players should oblige.

Aisling Annacotty are desperate to get a run going. After a couple of disappointing results they host a Fairview Rgs side on a good run of form so any positives will be hard fought.

Prospect Priory can open a five point gap at the top of Division 1A if they beat Granville Rgs. If Derek Braddish's side continue their current form they are heading to the Premier League.

Star Rvs will go top of the table in Division 2B if they can take full points on their trip to Summerville Rvs B.

Tonight (Wednesday) sees the continuation of the Tuohy Cup when Kilmallock take on Nenagh AFC in Jackman Park.

The County side recorded a big win over Nenagh's B string last weekend but face a more difficult proposal this time out.

Nenagh were pipped at the post for second week running last Sunday when they went down 2-1 to Balla. The winners meet Charleville in the quarter final.