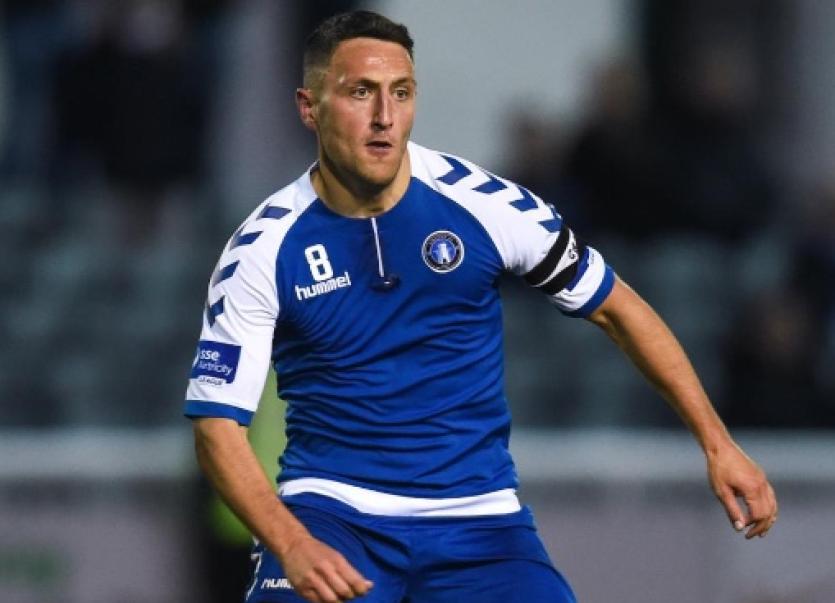 SHANE Duggan earned Limerick FC a massive point in their relegation scrap with the last kick of the game in Inchicore.

Good possession early on led to two chances for the Blues. Both of which fell to Chiedozie Ogbene. First, a weak Lee-J Lynch shot from the edge of the box was woefully parried by Polish stopper Lukasz Skowron. Ogbene raced onto the loose ball but only found the feet of the ‘keeper.

Next, the youngster sped away from Graham Kelly and fired goalward from an acute angle. Again, the unorthodox ‘keeper Skowron was level to his effort.

The Saints had the ball in the net ten minutes before the break via the boot of Billy Dennehy. He appeared well offside though, and the linesman on the near side agreed.

The break was fast approaching, but there would be plenty of time for incident. Ogbene cut in from the left and unleashed a thunderbolt off the underside of the crossbar. The linesman was needed once again – flagging to confirm the ball had crossed the line.

Just as the half-time lead seemed secure, a familiar face struck. Near interplay between Christy Fagan and Conan Byrne played former Blue Paul O’Conor in on goal and he couldn’t miss from close range.

The second half was a tighter affair, but the hosts would eventually carve out a lead goal with twenty minutes remaining. The superb Conan Byrne lashed an effort across goal and Barry Cotter diverted it past Brendan Clarke.

The four added minutes had elapsed when Barry Cotter played the ball into the feet of Rodrigo Tosi. The Brazilian layed off to his captain and Shane Duggan fired into the roof of the net to claim a huge point.