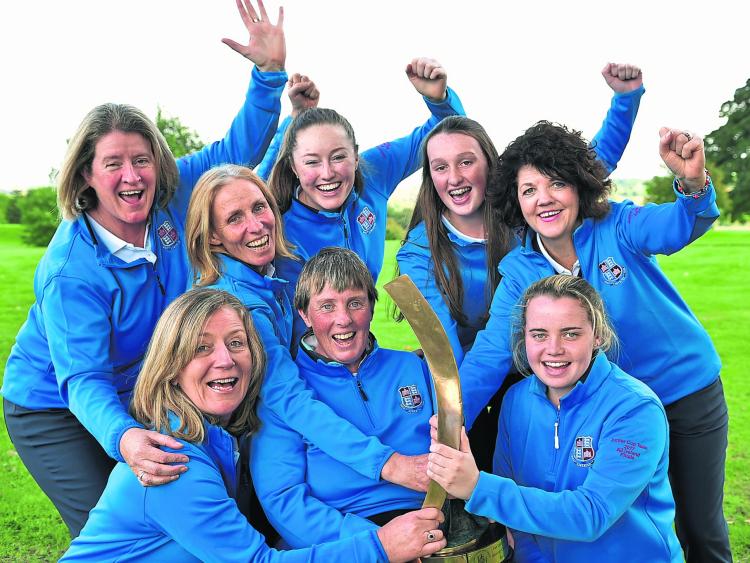 The busiest and most exciting week on the golfing calendar - the AIG/ILGU All Ireland Inter Club Finals took place at Malone Golf Club, Belfast last weekend.

These atmospheric championships have become the highlight of the year in Irish ladies golf. Six national competitions featuring thirty teams of all handicap ranges representing twenty-six clubs, all winners of their respective district championships, not to mention their hordes of enthusiastic and colourfully uniformed supporters descending upon one of the elite parkland course on the island with high hopes.

Malone was a fitting venue for such a thrilling spectacle and the matches were staged with utmost efficiency by the ILGU ably assisted by a band of over 100-volunteers from the home club.

Winning a green pennant is a difficult goal to achieve, at any level. It's a feat that generates much justifiable pride. For Munster teams to take home four of the six trophies is remarkable and the Southern District Chairman, Frances Hough, was present glowing with pride.

After a shaky start in Thursday's quarterfinal in the Junior Cup (5 matches of singles play for handicaps 9-15) Limerick disposed of a doughty Lurgan side in a tense, last hole battle. The ice cool Heather Fitzgerald, playing steady golf in the cockpit, won the vital point on the difficult 18th.

Leinster's Stackstown were dispatched a trifle more convincingly in Friday's semi-final. Faced with playing the Connacht champions, Athenry, in Saturday's final, it was hard to know in advance if the extra game Limerick played would help or hinder? Losing in the final of the same competition two years ago made Limerick more determined and it showed.

The first nine holes in the final were evenly contested but Limerick were 1-up in three matches at the crossoverpoint to the more difficult back nine. Gradually their grip on the trophy tightened. Each of the first three matches were won in decisive style. Emma Guinnane led brilliantly from the front, winning going away by 5/3.

The ultra-competive, Fiona McGann and the unflappable, Siobhan Conway followed suit by 4-holes winning margins. This allowed the delighted team captain, Ger O'Carroll, living on nerves of anticipation for months to call in her tailenders.

Emily Walsh played magnificently after a nervous start and is a young golfer of immense promise. As is the dependable No. 5, Heather Fitzgerald. Emily and Heather were more than happy to join in the celebrations that continued late into the night when the team returned to a packed Ballyclough clubhouse later that evening after the long drive home.

Limerick's Ladies Captain, Ailish Dilger, spoke for the entire club when she said: "It has been a fantastic year! We had the winning mentality all year and knew that if we believed in ourselves, we could achieve this and now we have!

“Losing to Enniscorthy two years ago was very deflating but we have come back with two of our brilliant U19's team (defeated so narrowly in their Irish FInal at Royal Curragh recently) added. We were not prepared to be denied this time. The support from the club has been amazing. We are very proud!"

A word of sympathy for Ballykisteen who faced an unstoppable Portumna side in the final of the Junior Foursomes. Catherine English & Neasa Fahy O'Donnell, Sarah & Mary Toomey, Caroline Cussen & Claire Griffin can be proud of their efforts. Perhaps, like Limerick, they had to lose before they win (next time)?

Aiming to win their second All-Ireland pennant of the year, Killarney GC reached the AIG Senior Foursomes final. The 2017 All-Ireland Senior Cup champions were up against Roscommon, playing in their first All-Ireland final.

The deciding third match was halted on the 20th hole due to bad light but Amy Arthur and Eimear O'Donnell made no mistake the following morning, winning on the 21st.

In golf, you can play for different clubs in the same year provided they are in different competitions. Killarney's Seniors International player, Mary Sheehy, is now in line for an unique treble of wins this year when she plays for her other club, Ballybunion, in the final of the Revive Active/ILGU All-Ireland Fourball at Royal Tara on October 8th.