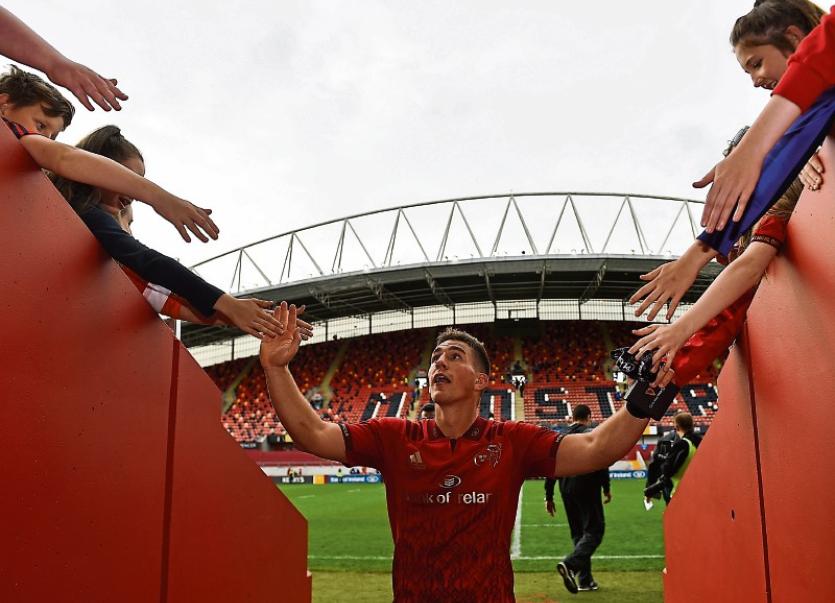 OUT-HALF Ian Keatley turned in a Man of the Match display as Munster racked up a convincing 39-16 bonus point victory over Cardiff Blues in the PRO14 at Thomond Park on Saturday.

Munster ran in five tries in all to get back on track, following their heavy defeat to Glasgow Warriors last time out.

JJ Hanrahan, who has returned to Munster this summer after spending two seasons at Northampton Saints, bagged a brace of second half tries on his first run out of 2017/2018.

Munster trailed the Blues 13-16 at half-time in ideal playing conditions. Munster’s first half points came courtesy of a Conor Murray try and eight points from the boot of Keatley.

The game swung decisively in Munster’s favour eight minutes into the second half as Cardiff prop Taufa’ao Filise was sinbinned as the visitors were penalised repeatedly following a series of scrums close to their own line.

Munster scored two tries when they had that man advantage.

Prop John Ryan bagged Munster’s second try on 51 minutes, while further tries from Hanrahan, following a great break from centre Rory Scannell and second-row Robin Copeland in the 68th minute, against his former club, sealed the bonus point for the home side.

Munster bagged their fifth try in the 73rd minute when Hanrahan dotted down for a second time.

Cardiff failed to scored in the second 40 minutes.

The only down side for Munster from the win was the unfortunate injury picked up by centre Jaco Taute in the opening half.