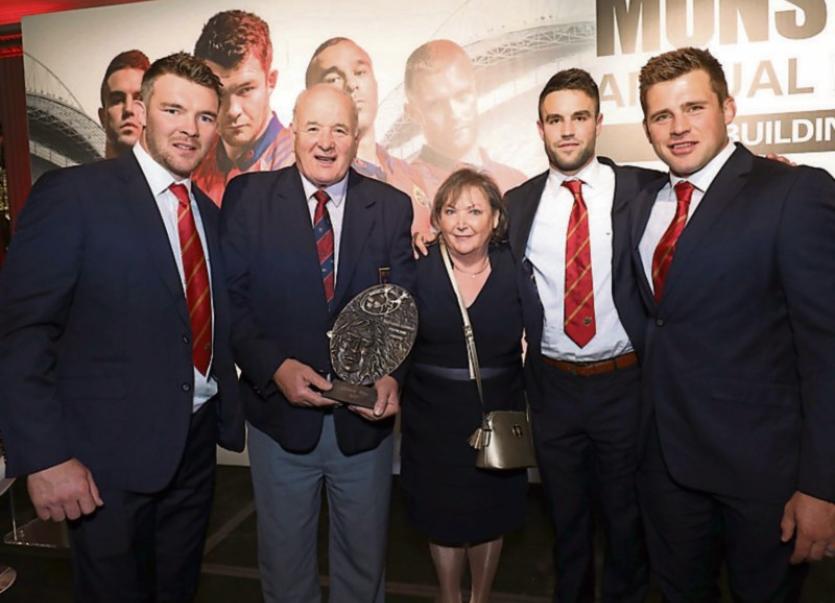 ANTHONY Foley’s parents, Brendan and Shelia, were in attendance at the annual Munster Rugby London Dinner on Wednesday night as the province’s former captain and coach was honoured with the Richard Harris Patrons’ Award.

The event took place at the Grosvenor Hotel on Hyde Park with the award recognising the late Anthony Foley who, ‘through his life or work, encapsulated Munster’s values of Passion, Integrity, Ambition, Excellence and Community.’

Anthony Foley was the embodiment of Munster Rugby. The day after his fifth birthday a young Anthony witnessed his father Brendan achieve the impossible with the men of Munster in defeating the mighty All Blacks in Thomond Park in 1978.

It was that same sense of belief, passion and never-say-die attitude that Axel – as he was known to family, friends and fans – carried with him throughout his own rugby career.  And what a trailblazing career it truly was, one that was deeply rooted in the club game.

Perhaps what fans will remember most fondly was the seismic part Foley played in Munster’s rollercoaster European journey.  There for every single twist and turn of their path to the Holy Grail, heart breaking defeats in the European finals of 2000 and 2002, and subsequent semi and quarter final exits, only served to reaffirm his belief that he was part of something special and Munster’s day would come.

It was fitting then on May 20, 2006 that Foley was the one who lifted the trophy when Munster won their first European Cup in Cardiff’s Millennium Stadium.

It’s testament to the man and all he achieved that Munster Rugby presented the Richard Harris Patrons’ Award to Anthony Foley posthumously on Wednesday night.

The award was first presented in 2014 and named in honour of Richard Harris who himself was a Munster Rugby patron in its truest sense.

Having represented the province both at Schools and U20s level, such was his pride in the jersey, he treasured his U20s jersey and famously wore it to the Heineken Cup Final in 2002.

Sculptor Jarlath Daly created a unique piece which was originally presented to the Harris family, with a replica being presented each year thereafter at the annual Munster Rugby London Dinner.