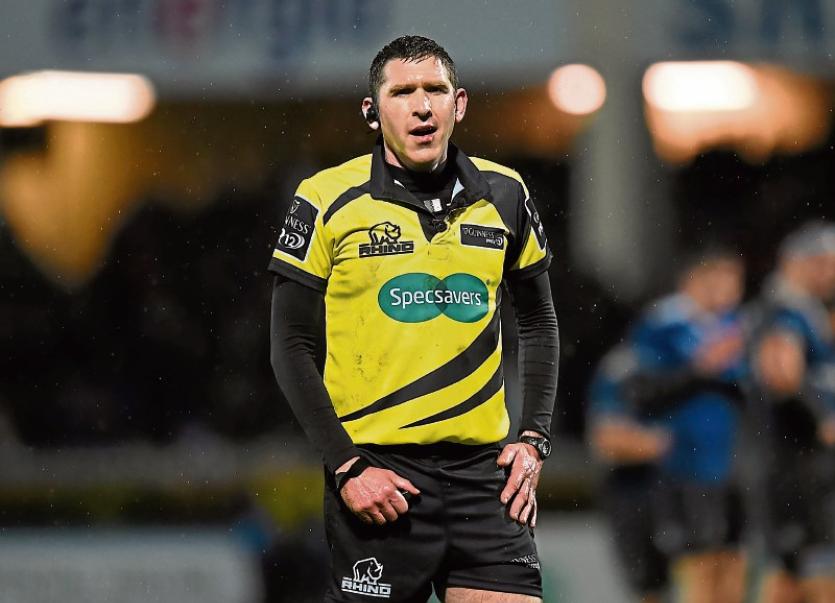 LIMERICK rugby referee George Clancy had beer thrown at him by a fan while serving as touch judge in Cardiff Blues Guinness PRO14 clash with Glasgow Warriors at the Arms Park.

TV footage of the game showed the irate fan, standing behind Clancy and wearing a Cardiff Blues jersey, pick up a plastic glass of beer before throwing it in the direction of the touch judge.

RT and name and shame this guy.

The fan was quickly ejected from the match venue by a steward.

Forty year-old Clancy played with St. Munchin's College and Bruff RFC as a fullback or fly-half in his youth, before taking up refereeing in 2000.

Cardiff Blues are said to be considering a life ban for the fan who threw the beer at Clancy.

Chief Executive of Cardiff Blues, Richard Holland said: “The incident was dealt with pretty swiftly and efficiently by our stewarding and security team and the individual concerned was ejected from the ground.

“I spoke to George Clancy after the game and apologised on behalf of the club and he appreciated and accepted that.

“It’s an extremely serious incident and the individual concerned won’t be welcome back at the ground for the foreseeable future.

“At this stage, a life ban is a serious consideration.

“It doesn’t look good at all. There is no place for this kind of thing in rugby and such behaviour will not be tolerated.

“You can’t condone it. There is no excuse for it.

“We will make a decision in due course and we will be taking the necessary action.”