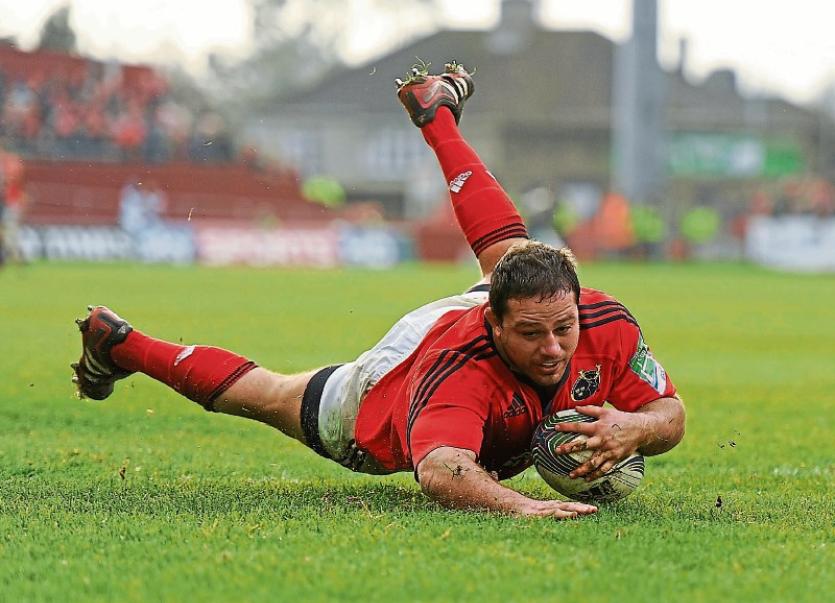 Prop Wian du Preez, who also played for the Cheetahs, in try-scoring form at Munster

WIAN du Preez won three Currie Cup medals with the Cheetahs and was coached by Rassie Erasmus between 2004 and 2007.

Springbok prop Du Preez, who retired from playing professional rugby in 2016 while at French side Lyon, also played 87 times for Munster between 2009 and 2013.

On Saturday, competition newcomers the Toyota Cheetahs face Munster in an historic Guinness PRO14 fixture at Thomond Park, 5.15pm. Thirty four-year-old Du Preez is well placed to inform Munster fans on what they can expect from the South African visitors.

Did you grow up a Cheetahs fan?

Wian du Preez: “Yes, I did as the whole family were Cheetah fans and because I was born and raised in Bloemfontein.

“Os du Randt was a hero of mine growing up and I was fortunate enough to be in the same match day squad as him at the end of his career while still a youngster.”

Do the Cheetahs have the same level of widespread support locally as Munster do?

Wian du Preez: “The support that Munster have in the province is something else and I was blown away by it when I arrived the first time. I don’t think you will get more loyal and passionate supporters anywhere in the world.

“Having said that, the Cheetahs is a very popular team in South Africa and there are big Cheetahs supporters across the region also you will find that Blue Bull, Stormers, Lions and Sharks supporters will support the Cheetahs as their second team because of the brand and style of rugby the Cheetahs play.”

How do the rugby cultures of Munster and the Cheetahs differ?

Wian du Preez: “They are more or less the same, both teams are based in small towns and rugby is the main attraction over weekends.

“The guys you play with become your good mates as well because everyone lives close by.

“Later the evening the two parties would link up in town. Naturally the forwards BBQs would be much more fun and the backs was always jealous of our organising skills but never welcome!

“It was a big factor into making the team even closer in those years that we won the Currie Cup.”

How well did you know Rassie Erasmus from your time at the Cheetahs?

Wian du Preez: “I know Rassie very well as I was fortunate to have him as my coach at the Cheetahs from 2004-2007.

“I also played a few matches with him before he retired and took up the coaching role at the Cheetahs.

“He has massive respect from all the people in the Free State and Bloemfontein for what he did as a Cheetahs player and then as coach of the Cheetahs and winning the Currie Cup three years in a row. I think he is the youngest coach to win the Currie Cup.

“The whole of South Africa has been watching his progress with Munster and the newspapers here questioned at the time how South African rugby could let him, along with Jacques Nienaber, go to Munster, losing their coaching abilities and rugby intellect.”

What did you think when the two South African sides joined the PRO14?

Wian du Preez: “I think the Cheetahs and Kings are doing ground-breaking work in going North to join the Pro 14.

“I think the Super Rugby competition is dying a slow death because of the format and weird points system.

“I am looking forward to their progress in Europe. I think other SA teams will also start looking at other competitions in the near future.”

Did you think that playing in the PRO14 was a viable option for the two sides?

Wian du Preez: “The first season might be tough because they have played every week so far from February, so injuries and fatigue might start playing a role.

“But from next season they will only compete in the Currie Cup and Pro14, so the management of player welfare and playing minute will be better aligned to those of the other teams in the Pro14.

“Also from a travel aspect it makes more sense and is much easier to adapt time wise. Everything will be new to them from the cities to the weather in December and January.

“That's normal call it growing pains, but from next season on everybody will be more comfortable and more use to the conditions.”

What can Munster fans expect from the Cheetahs on Saturday?

“The Cheetahs will definitely not be happy with the loss against Ulster and will be out to make it right. Munster hit the ground running so its gonna be a tough match.

”Players to watch out for include Ox Nche, Francois Venter, Tier Schoeman and the back three Mapimpi, Peterson and Sprckman.

“Luckily the games are shown here on television so I will be able to watch.”

How important is it that the South African sides get a chance to qualify for the Champions Cup?

Wian du Preez: “I think baby steps are important here so let the two teams find their feet in the new competition and then review the European situation in future when the time is right.”

After leaving Munster you played for Lyon until your retirement last year. What was that experience like?

Wian du Preez: “France is a tough place to go to in your first season if you don’t speak the language.

“Lyon was called the 'yo-yo-club' when I was there, going up and down between the Top14 and the ProD2.

“They have now settled in Top14 and are real contenders for some silverware this season. The French have a very relaxed way about doing things and meetings, trainings, etc never start on time, always 15 minutes late.

“Also the French do not like traveling away from home for matches.

”However, once you understand the French way and speak a bit of their language a new culture opens up to one and you have a better understanding of the French.”

Do you miss rugby since retiring and what are you doing now?

Wian du Preez: “I miss the unique culture there is within a team, the slagging, joking around, those type of things that would not go down well at a board meeting!

“And I miss the big match nerves and adrenaline that’s not there anymore like before a big match and the quiet beer afterwards.

“I am settling back into life here in Bloemfontein and work currently a director at a financial practice here in town.

“I am doing a bit of coaching at Grey College (renowned rugby nursery)  with the scrums of the junior teams and then I also coach the forwards of the O-20 side of the local University. I enjoy coaching younger sides.”