'If they find a replacement coach tomorrow - then I will go': Munster's Rassie Erasmus 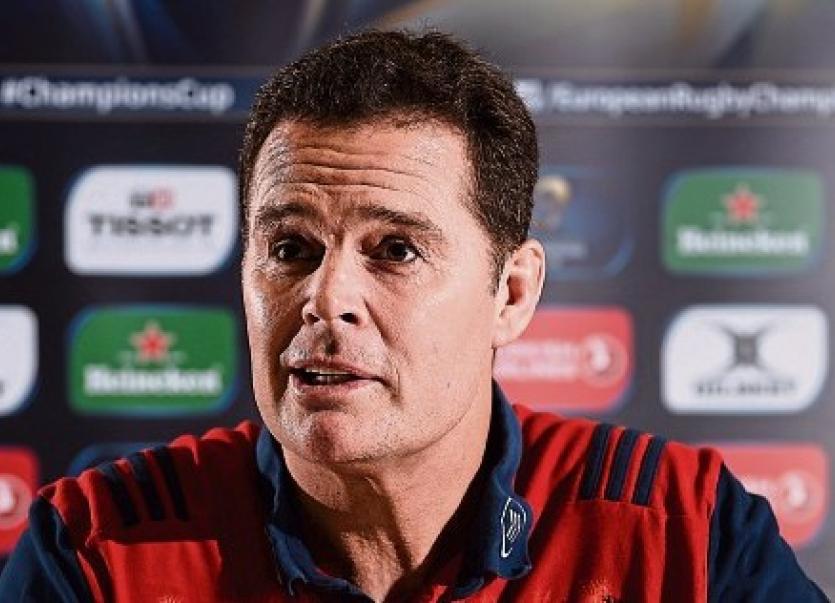 MUNSTER'S Director of Rugby Rassie Erasmus has spoken out for the first time since he announced his decision to return to South Africa.

In a lengthy interview with Munster Rugby's website, the former Springbok details, in his own words, how the process of a return home came about.

Erasmus is due to talk to the media (for the first time since his announcement) tomorrow at the Pro14 launch in Dublin. The exact timeline of events surrounding his departure had been cause for much speculation in the media and among Munster supporters, who were left shocked by the loss of Erasmus and Nienaber mid season.

Erasmus has also added in his comments, that he would be willing to leave should Munster and the IRFU find a replacement for him "tomorrow"

The Limerick Leader believes that there is a cut off point of early September for a decision to be made on a head coach, while there is still no clarity on whether or not Munster will even replace the role of Director of Rugby.

As reported yesterday, Felix Jones is believed to have been put on stand by, should he need to fill in as head coach, between December and when the new appointee can take charge.

“I, and my family, moved to Limerick not knowing what was ahead of us, it was a challenge I was both nervous and excited about, and the experience has exceeded any of my expectations.  However,  in making the decision to move I always said that one day I would like to coach the Springboks if the opportunity arose.

“The squad have always been the priority for me, and with regards the players I told them that I had wanted to be involved with the Springboks eventually.  I said ‘at this stage it is not a reality, but one day if it comes, I will definitely take that opportunity.’  It then became a reality earlier than I thought it would.

“I said the same to Garrett (Fitzgerald) and David (Nucifora), my employers, on an informal basis, saying that one day I would like to go back and be involved with the Springboks.  I asked would they stand in my way if I went to, not an opposition team, but an international team, and knowing where we all stood we continued to work together, understanding what may come down the line. As discussions then got more serious all eventualities were being looked at.

“In June South Africa Rugby confirmed how the newly created position would work and when I spoke to Garrett and David they confirmed they wouldn’t stand in my way.  It was a national job, a wonderful opportunity and not with an opposition team.  That was the spirit in which it was handled and both management and players understand the reason for leaving.

“Had I known earlier last season that I was definitely going to leave I would have said so, but to say so then would have been lying.”

Returning to South Africa alongside Erasmus will be Defence Coach Jacques Nienaber with both set to depart Munster in December, if not sooner, in facilitating the province’s succession plan.

“The reason for leaving in December and not the end of the season is that the South African season works differently from here.  In Europe it’s June to May, in South Africa it’s January to November.

“The way the whole conversation went with Garrett and David, it was never a case of Jacques and I staying for exactly six or nine months, or whatever.  The priority is finding the right replacement and if that means us staying until October, November or December, so be it, it’s an open discussion.

“I will coach and do my very best for as long as I am here, but if they find a replacement coach tomorrow and say I must go tomorrow, . Depending on appointments we may leave at different times, him before me or vice versa.  December at this stage is the ideal goal as we feel it will give everyone enough time to prepare, but that is open for discussion.

“We understand that we are in the middle of a contract and Munster are graciously helping us so anything we can do to facilitate Munster we will do.

“Leaving midseason can cause some uncertainty, but to a degree there was uncertainty as well last season, ‘who are these guys, where are they coming from, how will they handle it?’.  The squad went on to have a great season and we went on to bolster the squad in all the positions that we had to.

“We’ve got a stronger squad heading into next season and Jerry and Felix are fully on board with what we are trying to do. We have planned it very carefully, we are aligning the systems with coaches, players and Garrett so that whenever the departure comes the transition is smooth.

“For example, rather than me doing certain duties we have handed them over to Felix and Jerry now and they are overseen by me. Players then get used to that and it should make things easier for a new coach coming in.”

As regards the recruitment process undertaken by Munster and the IRFU, Erasmus is happy to assist where appropriate and necessary, yet building on the on-field successes of last season remains his primary focus for the coming months.

“My opinion will be asked if I know the guy, if I coached against the guy.  That would be the level of my involvement.  I will not be sitting in on any interviews.

“My focus is more on the start of the PRO14 and Europe.  I know we have a better squad than last year and we have grown as a team, but that must be reflected on the field, so that will be my only challenge, and priority, until we get on the plane.”