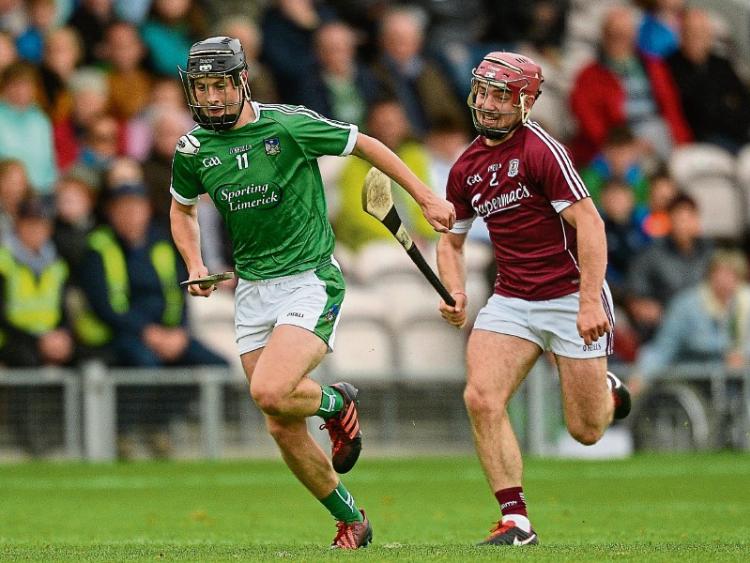 Barry Murphy of Limerick in action against Declan Cronin of Galway during the U21 Championship Semi-Final Picture: Piaras Ó Mídheach/Sportsfile

LIMERICK sports fans are set for a Super Saturday on September 9.

The Limerick U-21 hurlers chase All Ireland glory, while South African side The Cheetahs come to town in the new Guinness PRO14 to play Munster.

Both games will be live on TG4 across the afternoon and therefore the television coverage has a bearing on the respective starting times.

The Munster-Cheetahs round two game in the PRO14 will have a 5.15pm start in Thomond Park, while in Semple Stadium in Thurles the All Ireland U-21 hurling final, Limerick-Kilkenny, will have a 3pm start.

The All Ireland U-21 B hurling final between Kerry and Wicklow will be the curtain-raiser in Thurles at 1pm.

The eagerly awaited hurling final will be the first ever meeting of Limerick and Kilkenny at U-21 hurling level.

The U-21 final is a repeat of the All Ireland minor final of three years ago. On that occasion the Brian Ryan managed Limerick lost 2-17 to 0-19.

”There is unfinished business for these lads and that’s what is driving them on - they beat them in the minor final three years ago,” said Limerick U-21 manager Pat Donnelly.

“There will be no need for motivation speeches, these lads know what’s ahead of them - they know the prize on offer and they know there is a big team standing in the way of us,” he stressed.

Back in 1987, Donnelly was a player when Limerick won the first of five All Ireland U-21 hurling titles.

Next month they bring a proud record of never losing an U-21 final into the decider with Kilkenny, who won the last of their 11 titles in 2008.

”We have the tapes of their other matches. They are a good team - it will be 50-50,” said the Limerick manager of a Kilkenny team managed by eight time All Ireland SHC winner and four time All Star Eddie Brennan.

”We haven’t mentioned it to the panel of players up to now because the All Ireland final was always a long way off. Even the closer we got we didn’t mention it but now we can talk about it for the next three years and try and get them ready for the final,” said Donnelly, who was Limerick manager in the losing 2016 All Ireland minor final.