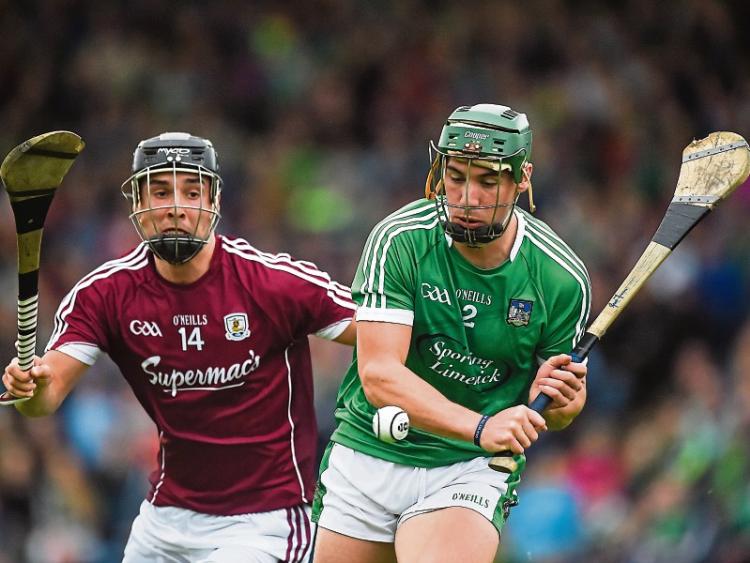 Sean Finn clears ahead of a challenge from Cian Burke

LIMERICK booked a spot in their sixth ever All Ireland U-21 hurling championship final with this Saturday evening’s 2-23 to 2-19 win over Galway.

It will be the first ever U-21 meeting of the counties and Limerick will go into next month’s decider with a record that shows no final defeat.

The Munster champions had to dig deep in this semi final. The sides were level nine times before Limerick scored the final four points.

It was an opening 30-minutes in which Galway were backed by the breeze but hit seven wides, compared to five for Limerick.

The sides were level on three occasions in the half, with Galway setting up with Sean Loftus as a sweeper. He was one of four members of the Galway senior panel in this U-21 side.

Galway opened the scoring with Brian Concannon and Limerick based student Thomas Monaghan on the mark.

Two points from Peter Casey had the game level for the first time in the eighth minute.

The Na Piarsaigh man was soon to have the sliothar in the net – reacting quickest  to scramble to the net after a Tom Morrissey shot had been saved.

That had Limerick 1-2 to 0-3 ahead and Galway weren’t to lead for the remainder of the half.

Barry Murphy and Barry Nash had points in the aftermath of the goal and the Munster champions were 1-4 to 0-4 clear at the mid-point of the first half.

Aaron Gillane frees kept the scoreboard ticking over with frees before Thomas Grimes had Limerick 1-7 to 0-7 ahead with five minutes still to play in the half.

Galway were to finish with five of the final seven points – Man of the Match Barry Nash on the mark for Limerick.

The early stages of the second half were tight but then five minutes in, Barry Murphy goaled for Limerick.

Nash and Murphy added points and Limerick were 2-13 to 0-14 clear with just six minutes gone in the half.

But back came Galway with a goal of their own – Jack Coyne finding the net and when the senior star Conor Whelan and Jack Grealish added points it was level again.

Gillane (free) and Cian Lynch responded but less than 10-minutes later Galway had a second goal. This time it was Whelan with a fine finish to move Galway 2-17 to 2-156 ahead as the game entered the final quarter.

But Limerick dug deep in style with subs Andrew La Touche Cosgrave and Conor Boylan among the scores to edge a point back in front with 10-minutes to play.

It was nip-and-tuck to the finish and the game was level for the ninth time in the 57th minute.

Limerick showed all their experience with the four final points to book a final spot.