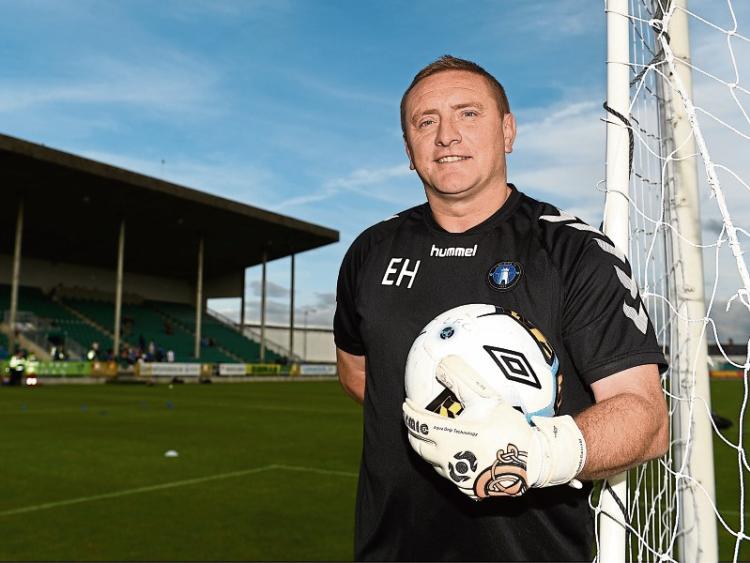 IN the next instalment of our ‘Coaching Clinic’ series, Limerick FC's Eddie Hickey chatted to Colm Kinsella about life between the sticks for Limerick FC, scoring goals and the hardship of real life - Pic by Diarmuid Greene/Sportsfile

Were you a goalkeeper all your playing career?

Eddie Hickey: “I started playing with Corbally Utd. My late father Ted was one of founding members of the club. I went to Granville Rangers then after U-15s.

"I always played in goals, never out field. My father was managing the team and being his son, I went in goals. It wasn't by choice.

“But every week I just wanted to go back in there then and I got more and more confident in terms of goalkeeping.

“Up to maybe 10 years ago maybe, there was no specialised coaching in terms of goalkeeping, particularly at schoolboy levels.

"Growing up I would have admired the likes of Neville Southall, Packie Bonnar was around and an icon of mine. Peter Schmeichel helped raise the bar.

“When I went to Granville, I got on the Irish U-18 team. From there I went to Pike Rovers Premier side at 18 and later to Limerick where I spent five years. I was then sold to Galway United where I spent three years.”

You turned down the chance to move to Derby County from Galway United?

EH: "When I signed for Galway United in 1999/2000, Don Riordan was the manager in charge. He put me on a two-year contract and he told me that a deal for me already to join Derby County after that. Martin Poom (Estonian international) was their keeper at the time.

“But I was only after getting married to my wife Martina at the time and I had no aspirations to move cross-channel. It was hard enough to leave Limerick for Galway.

“I never went to Derby in the long run, but I had no aspirations to move cross-channel."

You scored for Limerick in a League of Ireland game?

EH: "Back in 1997-1998, I came for a cross from a corner playing for Limerick in a game against Galway at Terryland Park.

“Tony Izzi was playing up front for us and I just let fly. The ball flew in over Eddie van Boxtel who Galway United had just signed at the time, costing a lot of money.

“The ball went in over his head. It was one of those freak things. My mam and dad were in the George Hotel on the night out for a meal. I had an uncle over from America. Teletext was the big thing then for keeping up to date with scorelines and results.

“My dad asked the barman to turn on Teletext so he could find out who was winning the game. When it came up as 'Limerick 1, Galway 0 and 'Hickey' as the goalscorer, he was wondering 'who the hell is this Hickey guy who is after signing for Limerick?' Turned out it was me. We won 2-1!

You retired from playing League of Ireland in 2002/03 for family reasons?

EH: "My daughter Megan got sick when she was three. With all the travelling to Galway, I just said 'no'. We put all our energy into helping to get her better.

"She is fit and healthy now, back playing football as well. She has played at Gaynor Cup level and plays with Regional.

"I finished up then. We spent the bones of three years solid travelling up and down to Crumlin because she couldn't be treated in Limerick. In the time I had a lot of calls from clubs in Dublin, around the country and even Limerick to go back playing. But I had fallen out with the game and I had started to do my coaching badges trying to get myself back in.

"I was 27. I had 21 years done playing in goals from schoolboy right up. I had never played outfield.

"In 2010, I was 38 or 39 then, and Jason Purcell, who I had played with at Limerick, he was manager of Fairview and he asked me if I would go back for two weeks in July as the keeper was away on holidays.

“I hadn't played for a few years, I was just coaching. I said I would give him a dig out. Those two weeks in July went to 10 months. It went to the following May and we won the FAI Junior Cup beating St Michael's on penalties in Cork.

“I am going to play in Shane Tracy's testimonial game at the Markets Field next month. Shane has asked me to play, so I am looking forward to that.”

What attributes does a good goalkeeper need?

"You have to have, I won't say a streak of madness, but a sixth sense to read what the players in front of you can't see. You have to be very, very level-headed. I heard Paul O'Connell say you have to have fire in the belly and ice on the brain. That sums it up.

"The big thing for me is what you do when you are not at training or not playing, how you conduct yourself off the pitch. That determines how you play on the day.

"That covers areas like rest, diet, extra work. You can only train so much with your coaches, your team, your team mates, you need to take in an extra bit. I never went out when I was playing with Granville or Pike Rovers on a Saturday night. That is a big thing for me.”

What age should you specialise as a goalkeeper?

EH: "The way the game has evolved, as coaches we are trying to get players out the pitch and rotate them into goals, dip them in and out up to the ages of 12 or 13.

“Is there a right age to commit to playing exclusively in goals? Yes, obviously by the age of 15 max, you need to have your decision made that you don't want to play outfield.

"Myself and Kevin Fitzpatrick have our own goalkeeping academy, Limerick Goalkeeper Academy, which has a Facebook page people can have a look at. It is running more than six years now and it has gone from strength to strength.”

How valuable is a good goalkeeper to a side?

EH: "When I came into Limerick coaching on a full-time basis, Barry Ryan was in goals and every year I could put Barry Ryan down for a minimum of 12 points. I have always worked off that.

"How much are the 12 points worth to a club at the end of every season? Can they get a striker who is guaranteed to get us 20 goals a year, no they couldn't, but I could almost guarantee that I would have Barry set up to get us a minimum of 12 points.”