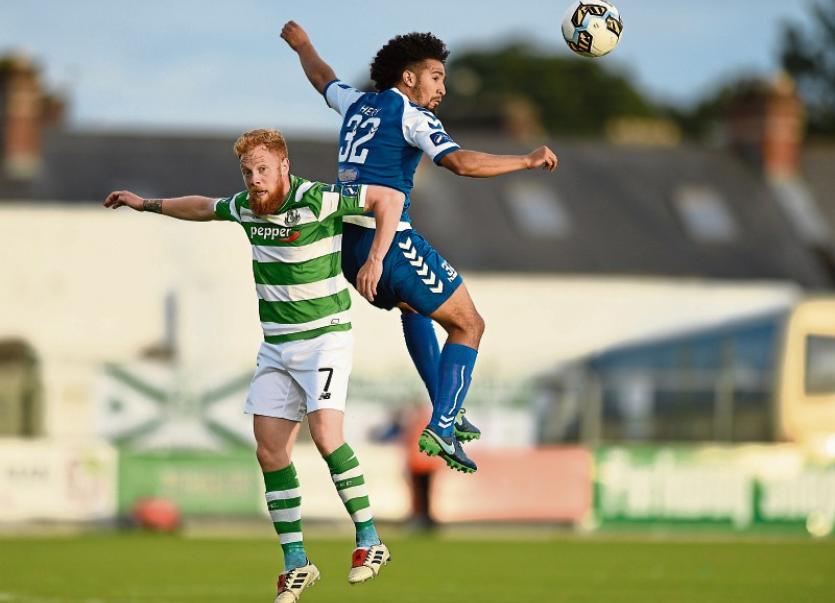 LIMERICK FC’s relegation worries grew at the Markets Field on Tuesday night as the Blues slumped to a disappointing 2-0 defeat to Shamrock Rovers in their rearranged SSE Airtricity League Premier Division fixture.

The concession of poor goals in either half from a David McAllister header and captain Ronan Finn saw lacklustre Limerick suffer a fourth defeat in their last five Premier Division fixtures before an official attendance of 1,234.

Neil McDonald’s struggling side now sit just three points above the drop zone and having taken just one point from a possible 15 in their last five league fixtures, the Blues are in freefall.

To be fair, three of those defeats have been against ther top four sides in the Premier Division table – two away from home – but on the back of a poor run and falling confidence levels it is going to take something special to bring about a quick change in fortunes.

Equally worrying is the fact that, in attack, Limerick, who have now won just one of their last eight Premier Division fixtures, have scored just once in their last five league games.

The sense of optimism, generated by Saturday night’s clinical 3-0 away win over Cobh Ramblers in their Irish Daily Mail FAI Cup,  wasn’t much in evidence among Blues supporters trooping out of the ground at full-time on Tueday night.

Limerick almost made the perfect start when Ogebene and Hungarian striker Peter Berki combined well on the left, but Dean Clarke fired over the crossbar from inside the penalty area after just 21 seconds.

The home side had a let-off in the 11th minute when Rovers captain Ronan Finn took a short corner which caugtht out the Blues defence, but goalkeeper Clarke showed excellent reflexes to push Miele’s shot away and McAllister’s follow-up lacked any real conviction.

Eleven minutes later. the Hoops threatened down the left as James Doona cut in to find space 20-yards from goal. However, his well struck effort flew narrowly wide.

After Limerick had enjoyed a decent spell of possession, the visitors trook the lead on 41 minutes when David McAllister headed home from Brandon Miele’s well-directed corner. Limerick will be bitterly disappointed by the slack marking from the set-piece.

The Hoops deservedly maintained their 1-0 lead until half-time.

Rovers looked to turn the screw at the start of the second half with the Hoops dominating possession as Limerick struggled to get out.

Manager Neil McDonald introduced two substitutes, Stephen Kenny, and striker Garbhan Coughlan, who netted two goals in the FAI Cup first round win over Cobh Ranblers on Saturday night, as 55th minute substitutes in a bid to change the momentum of the game.

However, no sooner had the changes been made than Rovers took a 2-0 lead when captain Ronan Finn fired home from inside the penalty area.

The Limerick FC fans sense of frustration was audible in a healthy mid-week attendance,

Captain Shane Duggan was replaced by Brazilian striker Rodrigo Tosi as the home side chased a vital goal.

The Blues did come within a whisker of getting back into the game, but Tosi’s header from Lee-J Lynch flew inches wide in the 73rd minute.

It was as close as a struggling Limerick side would come to reducing the deficit on a frustrating night in Garryowen.