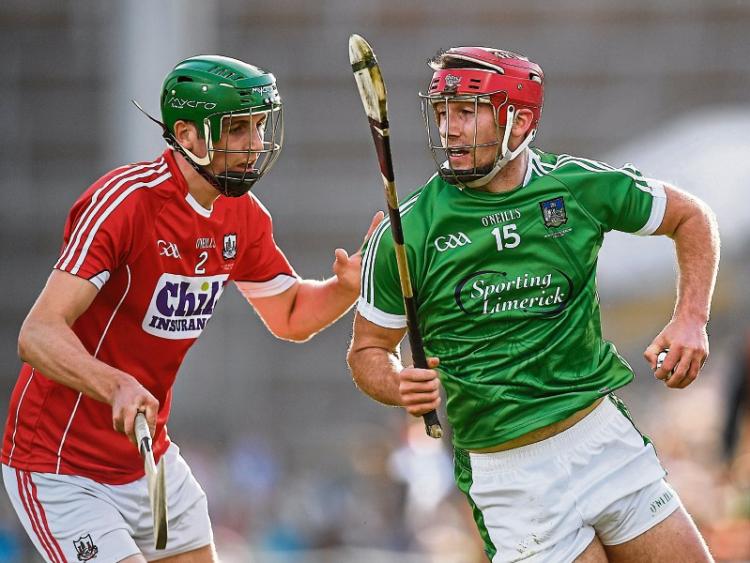 Limerick's Barry Nash in action during Limerick's win over Cork

Limerick were crowned Munster U-21 hurling champions for an eighth time this Wednesday evening.

For 11 members of Limerick’s extended 37-man panel this was a second Munster U-21 title in three years.

The victory books a Saturday August 19 semi final with Galway - Kilkenny play Derry in the other semi final. The All Ireland U-21 final is scheduled for Thurles on Saturday September 9.

In a 19th final appearance, Limerick had some nervy second half moments – they led by seven points at one stage only to see it reduced to two with five minutes to play.

The hot 2/9 favourites were 0-7 to no score clear after 14-minutes demonstrating all their experience with five players starting in their second Munster U-21 final in three years.

After Ronan Lynch and Aaron Gillane frees it was Thomas Grimes that had the first score from play on nine minutes.

Peter Casey and another from Grimes helped build the early lead thanks to the hard work of Man of the Match Cian Lynch and Colin Ryan in the middle third.

But then 7/2 outsiders Cork found their feet with senior player Shane Kingston notching two points to cut the lead to four points.

After almost seven minutes without a score Mike Mackey and Barry Nash steadied the Limerick ship.

But the home side were then rocked a bit more when Tim O’Mahony fired in a 25th minute Cork goal.

Credit Limerick, there was again a response with Casey and Morrissey with quick-fire points.

The final say of the half was a Michael O’Halloran point and that left Limerick with four point interval lead. It was a half that saw Limerick hit seven wides and four for a Cork side that started without two senior players – Darragh Fitzgibbon (suspended) and Luke Meade (injured).

The free-flowing play of the first half was replaced with a scrappy second period, in which Limerick scored only once from play through Barry Nash.

Limerick's attack took the plaudits in the big semi final and quarter finals win over Clare and Tipperary but in this final the defence stood firm, conceding just three points from play in the second half when Cork had the breeze.

Two Gillane frees opened the scoring but then a Nash point was to be the only Limerick score of the next 23-minutes in a half when Limerick brought their wides tally to 12.

But Cork didn’t take the lead with the scoreboard reading 0-14 to 1-9 before the end of the Limerick barren spell.

It was a Gillane free that settled Limerick after a late challenge on Colin Ryan.

Gillane added another to ease the growing tension.

Cork did finish with two late points but Limerick held on as supporters raced onto the Gaelic Grounds pitch in celebration.