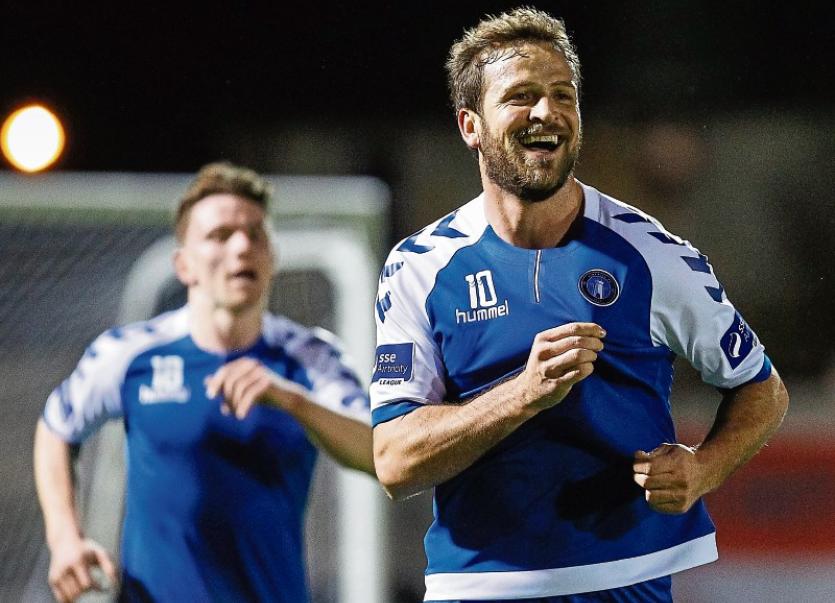 LIMERICK FC surrendered a two-goal second half lead when playing out an entertaining 2-2 draw with SSE Airtricity League Premier Division basement side St Patrick’s Athletic before an official attendance of 1470 at the Markets Field on Saturday night.

Neil McDonald’s side looked all set to pick up a precious three points when goals from Chiedozie Ogbene, in the opening half, and Brazilian Rodrigo Tosi from the penalty spot on the hour mark helped the Blues into a 2-0 lead.

However, St Pat’s who were propping up the Premier Division table before kick-off, came roaring back and the visitors deservedly secured a share of the spoils with goals from an Ian Bermingham header and a Conan Byrne free-kick on 74 minutes.

With the transfer window opening in a week, Limerick’s defensive frailties is an area Blues manager Neil McDonald will need to address for sure.

Limerick have not kept a clean sheet since their April 15 fixture with Drogheda at the Markets Field and the Shannonsiders have only kept three clean sheets all season.

St Patrick’s Athletic may have been bottom of the Premier Division prior to kick-off, but the Inchicore side started the better, enjoying the lions share of possession and posing the bigger threat in front of goal.

The home side did take the lead two minutes later with a terrific breakaway goal.

Limerick FC’s former St Pat’s goalkeeper Brendan Clarke did well to punch a corner clear from under his own bar. Midfielder Lee J Lynch, another former St Pat’s favourite, broke free up the left, before playing a delightful ball into the path of the speedy Ogbene.

The former Cork player raced through on goal and kept his composure superbly to slip the ball into the bottom right corner of the net.

Limerick might have added a second goal on 23 minutes as Tosi headed over when O’Conor was better placed for Lynch’s cross.

However, the Saints remained a threat going forward and it took some great defending by Paul O'Conor to get back and clear off Fagan's foot in the box.

Limerick maintained their 1-0 lead until the half-time break.

Visitors St Pat’s came oh so close to equalising after 52 minutes but Markey's cross which looked destined for the net was taken off the line and in the follow-up, Blues keeper Clarke gathered possession in the nick of time as Christy Fagan looked sure to score from six yards out.

Limerick FC made it 2-0 against the run of play on the hour mark when top scorer Rodrigo Tosi netted from the penalty spot after the Brazilian was felled inside the penalty area.

And the Dubliners deservedly drew level on 75 minutes when Conan Byrne’s free kick from 20 yards flew past Clarke high into the net. The equaliser was no more than the visitors deserved as Limerick paid a heavy price for poor defending and an inability to control possession.

Both sides had chances to win it late on, but a draw seemed like a fitting result.