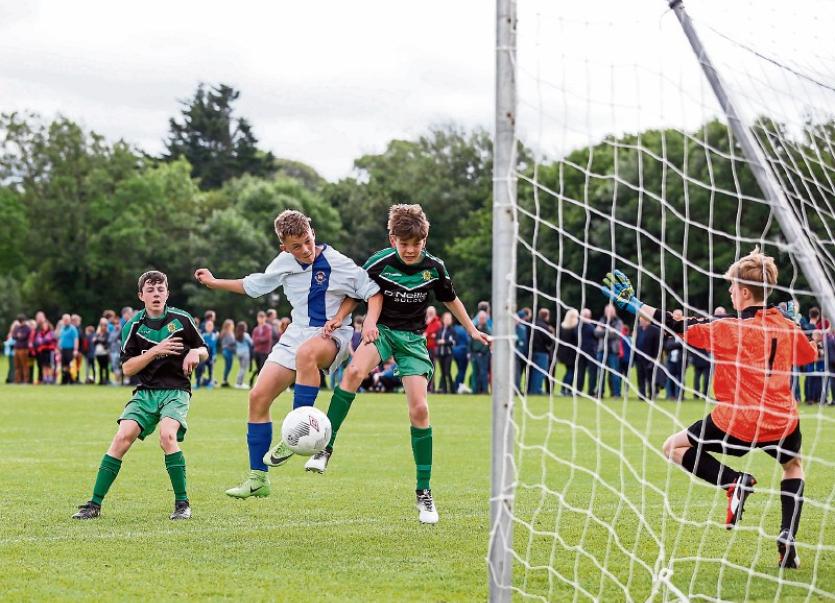 LIMERICK Desmond Schoolboy League has qualified for Wednesday’s quarter-finals of the SFAI Kennedy Cup at UL, but there was disappointment for Limerick District Schoolboy League who narrowly missed out.

Limerick Desmond will face the Cork League in their last eight clash at UL at 5pm on Wednesday after  topping Group 1 with a game to spare.

Desmond recorded back to back wins over the Carlow and Kilkenny League before losing their ‘dead rubber’ fixture against the Midlands League 1-0 on Tuesday afternoon.

Limerick District will play-off for a 9th-16th place finishing after finishing second in Group 3 on six points, one behind winners, the Athlone League.

Limerick District followed up their 4-0 victory over Limerick County on Tuesday morning, secured with goals from Caherdavin Celtic pair Ronan O’Dwyer and Cian Fitzgerald as well the Limerick FC duo of Wassiou Ayawe and Jake Prendergast, with a 2-1 victory over the Wexford League.

Goals from Ayawe and Prendergast, from the penalty spot, guided the home side to victory over a game Wexford side which pulled a goal back late on.

Limerick District are guaranteed to finish between 9th and 16th place overall and will take on Dundalk in a Bowl quarter-final on Wednesday, 5pm.

Meanwhile, Limerick County picked up their first point of the Group stages when recording a 1-1 draw with Kennedy Cup quarter-finalists the Athlone League.

The spirited Limerick County side fought back from 1-0 down to force a share of the spoils through Zach McCarthy, of Kilbehenny.

Limerick County will be involved in the play-offs to determine places 25-32 in the Kennedy Cup.

Limerick County will now play the Mayo League at 3pm on Wednesday in the Trophy quarter-finals.