Wins for Limerick's District and Desmond Leagues in Kennedy Cup 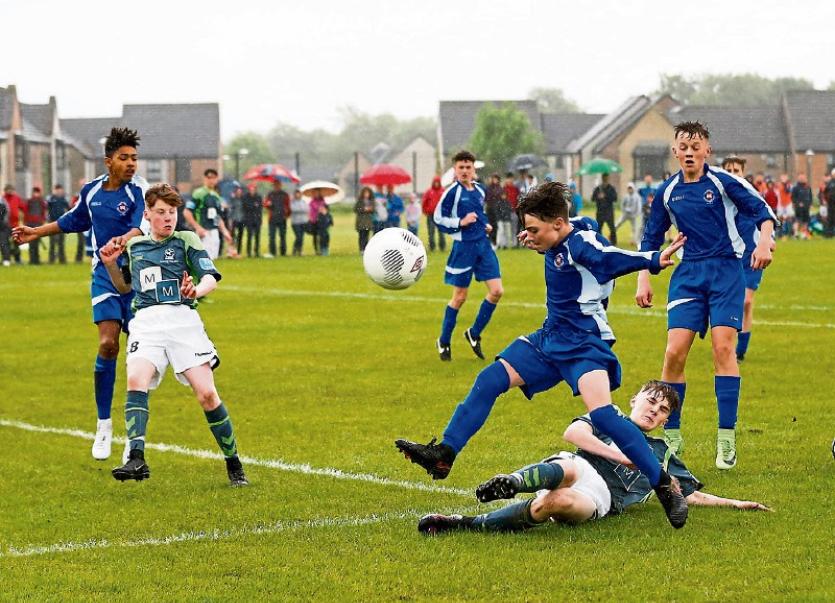 Limerick District’s Cian Fitzgerald, who scored in their Kennedy Cup win over Limerick County, in action here against Athlone

THE Limerick District Schoolboy League got their Kennedy Cup campaign back on track at UL this Tuesday morning with an impressive 4-0 victory over local rivals, the Limerick County Schoolboy League.

Meanwhile, the Limerick Desmond Schoolboy League have qualified for the quarter-finals of the Kennedy Cup with a game to spare after scoring a clinical 3-0 victory over the Kilkenny League.

The win was the West Limerick side’s second group victory and sees secure a last eight spot with their final group fixture to come later on Tuesday afternoon.

Limerick District’s outside hopes of qualifying for the quarter-finals of the Cup now rest on them beating the Wexford League in their final fixture and hoping the Limerick County side can do them a favour by defeating an impressive Athlone outfit.

Following on from their dramatic opening day defeat to Athlone, Limerick District took their derby clash with Limerick County to their opponents from the start.

Caherdavin Celtic’s Ronan O’Dwyer headed the District side in front after just five minutes and they came close to adding to their tally through the opening half.

Three second half goals from the Limerick FC duo of Wassiou Ayawe and Jake Prendergast as well as a fine strike from Caherdavin’s Cian Fitzgerald secured the victory against their spirited local rivals.

Limerick County, still looking for their first win, face the Athlone League at the same time.

Limerick Desmond are already assured of a place in the quarter-finals of the Kennedy Cup after their 3-0 win over Kilkenny saw them guarantee a top spot finish in Group 1.

Limerick Desmond led Kilkenny 1-0 at half-time, thanks to a goal from AK Utd’s Joey Rushe.

Desmond wrapped up the victory in the second half with further goals from David O’Shaughnessy, of Askeaton, and Ballingarry’s Michael Molloy.

Limerick Desmond face the Midlands League in their final group fixture at 4pm this Tuesday.

The West Limerick side will play their quarter-final of the Kennedy Cup at UL at 5pm on Wednesday.