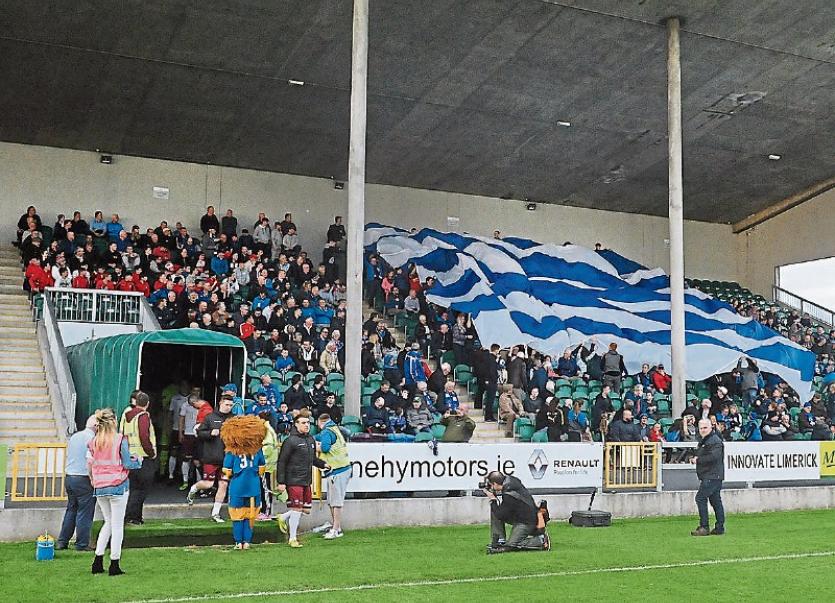 McDonald, who was only unveiled as the new Blues boss on Thursday morning, was in the Limerick dug-out for the game, but interim manager Willie John Boland actually look charge of the home side for the fixture.

After an uneventful start, the complexion of the game changed utterly in the 20th minute when Limerick FC ‘keeper Brendan Clarke was sent off for handling the ball outside the penalty area.

Two goals from Dundalk’s man of the Match David McMillan in the 29th and 37th minutes, the first from the penalty spot, and a third goal from substitute Sean Gannon a minute from full time, helped the Co Louth side secure a convincing victory.

New Limerick manager McDonald will appreciate that he has a big body of work ahead to prevent the Blues from slipping into the relegation zone, with three times facing relegation from the Premier Division at the end of the season.

The opening quarter of an hour was hectic, but lacked any real pattern, with both sides struggling to create anything by way of a clear-cut scoring chance.

The game took a dramatic turn in the 19th minute with Clarke’s red-card for stopping Michael Duffy’s goalbound shot outside the box with his hands.

Moments earlier Clarke had coming rushing out of his area to clear the ball with a diving header and was stranded in no-man’s land when Duffy shot.

Blues fans breathed a sigh of relief, however, when Duffy’s free-kick flow high over the crossbar.

Forced to play with 10-men for 70 minutes of the game, the Blues were left facing an uphill task to take anything from the fixture.

And Dundalk duly took the lead after half an hour. Patrick McEleney was judged to have been taken down by Paul O'Conor inside the penalty area. It looked a harsh call, but David McMillan kept his composure to send substitute keeper Hall the wrong way to open the scoring.

Dundalk’s dominance grew as the half wore on and the Co Louth side added a second goal after 36 minutes.

Duffy found McMillan with a pinpoint cross at the near post and he powered home a terrific header for his second goal of the evening.

Limerick managed to contain their deficit to two goals until half-time. Chiedozie Ogbene, raiding down the left wing, remained Limerick FC’s only real attacking threat before Dundalk took the lead and after. The champions struggled to contain the speedy Cork winger.

However, six minutes after the re-start Dundalk almost make it 3-0 as Massey's cross from left is met by the head of McMillan but the crossbar denies him his hat-trick.

Dundalk again came close to adding to their tally in the 56th minute when Michael Duffy crossed from the left and the in-rushing Dean Clarke was relieved to see keeper Freddy Hall stop his effort diverting past the Blues netminder.

Limerick’s only real decent chance in the opening 20 minutes of the second half arrived in the 65th minute when Clarke crossed from the left, but Mulhall didn’t manage to get sufficient purchase on his effort which was easily taken by Rogers in the Dundalk goal.

Dundalk continued to dominate a tiring Limerick side as the half wore on and the visitors margin of victory would have been greater, but for a string of fine saves by substitute ‘keeper Hall, including one terrific stop from Chris Shields on 78 minutes.

However, Hall was helpless to prevent substitute Sean Gannon from making it 3-0 for the Co Louth side a minute from full-time.

Next up for Limerick FC is an away date with Bohemians in the SSE Airtricity League Premier Division at Dalymount Park on Tuesday evening,