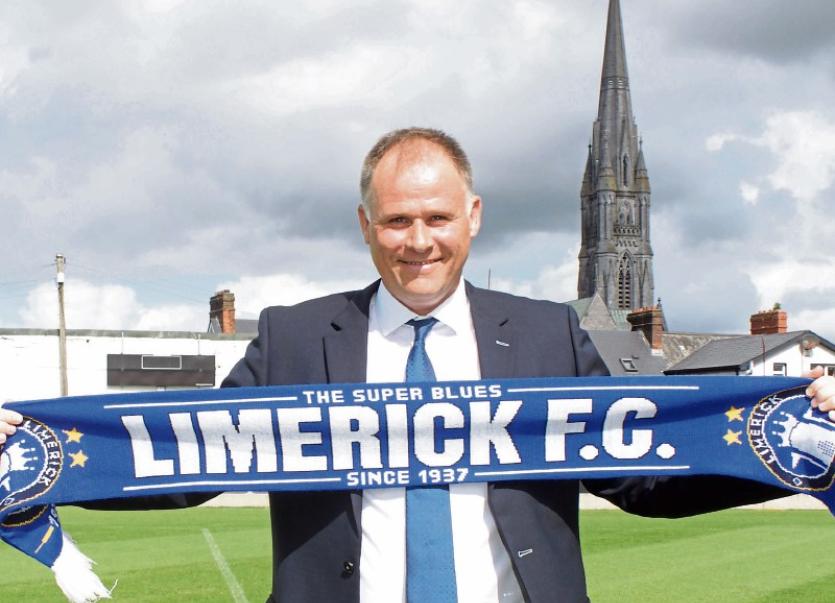 NEW Limerick FC manager Neil McDonald wants to bring back the glory days of the club from the 1980s as he aims to ‘leave a legacy’ behind him.

McDonald, a close associate of former Limerick FC and current Crystal Palace boss Sam Allardyce, was announced as the new Blues boss on a three-year deal.

The 51-year-old Englishman spent time at Newcastle United and Everton as a player, making over 300 appearances combined, and has managed Carlisle United and Blackpool.

In his coaching career – where he has 20 years’ experience – McDonald worked under Allardyce at Bolton Wanderers, Blackburn Rovers and West Ham United.

And, having sought advice from his close associate, he wants to drive the Blues towards their aim of European football - having not been on that stage since their League and Cup-winning days of the early 80s.

“I’m very, very impressed with what the club is trying to do and how it’s trying to progress,” McDonald enthused.

“I’m sure it’s one of the clubs in Ireland that is on the up. I would like to be part of that to push it on to a new level – that’s why I’ve come. I’ve committed myself to the club on a long-term project,” McDonald said.

“I’ve been impressed with how they’re trying to go about it, but at the end of the day the team has to win and it’s my responsibility to make sure that the team wins – try to play exciting football but win games. The level that the club is trying to get to is certainly achievable and hopefully I can deliver that.

“I’m really, really pleased to be given the opportunity to manage a great club like Limerick. Everybody I’ve spoken to and I’ve been involved with since I came across on Monday speaks very, very highly of the football club.

“We’re trying to push Limerick into being an A-star football club, all the way through from youth to first team.

“The aspirations of where they want to get to is a great project and certainly one that I want to be heavily involved with, to leave a legacy and push the club to boundaries that they’ve been before but it was a long time ago. We want to get back to that as quickly as we possibly can. It’s certainly achievable.

“I’m really excited about the challenge. Looking at videos of the team they look as though they can handle the ball and they want to play in the right way which is great, and hopefully I can add to that.”

McDonald is hoping that Limerick can achieve European qualification this season, with fourth place possibly enough to do so, the club currently sitting just three points off Derry City in that position.

And he revealed that he spoke to Allardyce, who managed the Shannonsiders to First Division success in 1992.

“I spoke to Sam. He has always spoken very, very highly of Limerick in lots of years gone by when he was here.

He said it’s a progressive football club and certainly as a coach and manager it’s nice to come to a progressive club when it gives you a chance to succeed.”

Willie Boland will take charge of Friday’s game against Champions Dundalk – who McDonald is well aware of following their UEFA Europa League exploits – with the new boss set to take his place alongside the former Cardiff City star in the dugout.

“They’re Champions but they have lost a few players,” McDonald said, pointing to the loss of influential trio Andy Boyle, Daryl Horgan and Ronan Finn.

“We have to make sure that we compete and that we’re well prepared. Willie will be in charge – I’ll be on the touchline, having an input on that. I’m certainly not sitting in the stand, that’s for sure.

“We’ll look forward to the game and trying to compete against the Champions of last year.”

McDonald - who took his first training session with Limerick on Thursday afternoon - most recently worked in the English Premier League with Hull City, as assistant head coach to Mike Phelan, leaving that role just last January.

Limerick will be without striker John O’Flynn (groin) for Friday night, while defender Shane Tracy (knee) continues his road to recovery.