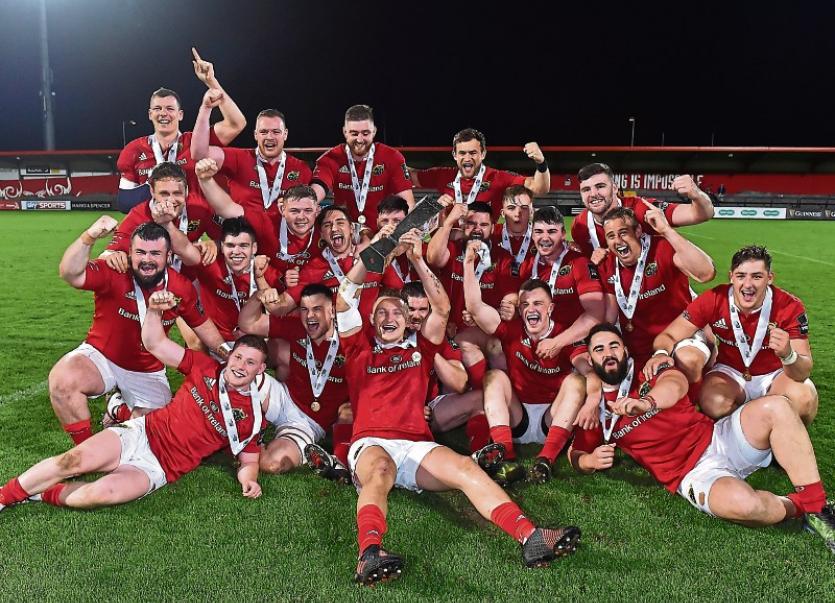 MUNSTER A scored their British and Irish Cup final success in five seasons, as a storming second half comeback helped earn a nail-biting 29-28 victory over the Jersey Reds at Musgrave Park on Friday night.

Munster A’s hopes of success looked slim when they trailed English Championship side Jersey 18-0 coming up to half-time. However, Peter Malone’s side hit back superbly, scoring four tries, three in the second half to record a thrilling success.

Munster will hope the success is the first half of a big weekend double for the province as the senior side face Saracens in a mammoth Champions Cup semi-final at the Aviva Stadium on Saturday.

The scenes of celebration at full-time were in stark contrast to the mood in the stands among Munster fans in the opening minutes as Jersey built that 18-0 lead after just 14 minutes with a try from Nick Scott inside 60 seconds and a second from hooker Joe Buckle as well as eight points from the boot of Callum Sheedy.

Crucially, Munster got themselves back into the game just before half-time when Gavin Coombes dotted down after a period of sustained pressure, while David Johnston converted for 18-7.

Munster made the ideal start to the second half when Kevin O’Byrne crossed after a fine break from Alex Wootton, with Johnston again adding the extras for 18-14.

Jersey hit back with a Kieran Hardy try to lead 25-14, before Munster hit the front with tries from Johnston and Wootton in a blistering four minute spell.

Munster now led 26-25. The see-saw nature of the scoring was not over yet, however, as another Sheedy penalty saw the Reds regain the lead 28-26 after 61 minutes.

However, the decisive score of the game arrived in the 68th minute when Johnston kept his composure to land the match-winning penalty.