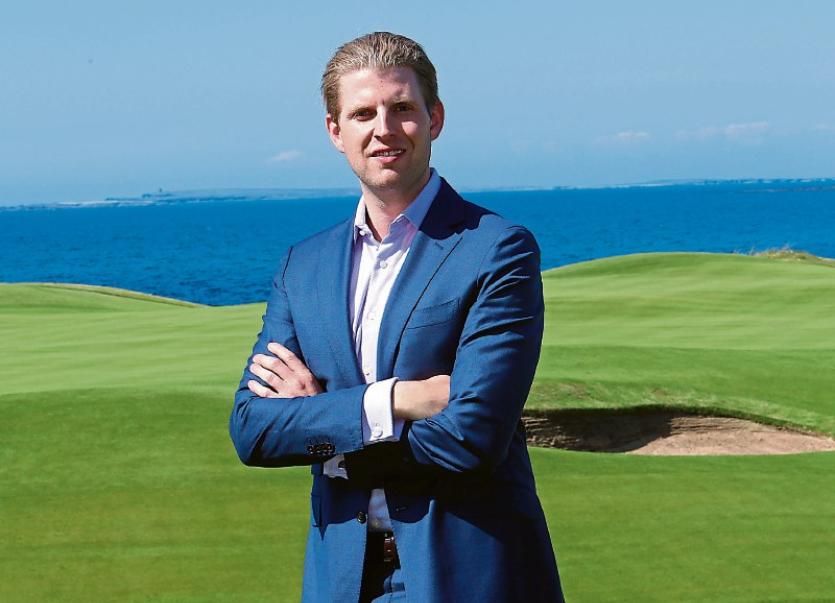 PROVIDED you can see past the threat to close the facility if his demands to be allowed build the sea wall are refused or delayed for much longer, Eric Trump, who runs the Trump organisation while his father is otherwise engaged, gave what I thought was a reasonable, fair and positive interview to The Clare Champion newspaper last week.

Anyway, how can you blame the Trumps for wanting to fortify and secure their course boundary with the ocean?

Trump the Younger was keen to stress his personal commitment to the Doonbeg resort: “We have a massive plan for an unbelievable ballroom here, which will create hundreds of construction jobs, as well as future, full-time jobs.

“We have plans to build more hotel suites, a massive swimming pool and fitness complex. We want to do more hospitality, lodgings and villas. We have something amazing here and we want to expand and develop it. It’s tens of millions.

“Easily €30m, when everything is said and done but it all depends on the success of the pending the planning application. We’re not going to do any of that until this (erosion) problem is taken care of because we simply can’t. We just don’t know the fate of our property, without being able to protect it.

“We have put in tens of millions of dollars already but phase two and three of the project depends on planning. We’re not going to put up a ton of money if we are not certain as to whether a storm could wipe three holes off the golf course overnight.

“We’re not in the business of building walls but if we don’t build one we will have no security. That means no hotel. If the hotel is not there, 300-families will be affected. The village will be badly effected; the grocery store, the pharmacy, the pubs, the gas station and the farmers, whom we buy produce from, the trickle-down effect is big."

Mr Trump certainly has my support when he talks of 'bemusement' at people, who live aboard and have no connection to Ireland, sending submissions to Clare County Council opposing the proposed coastal erosion work application.

He cited an instance of one man who lives in Arizona, who sent a submission objecting, to the council when only 26-miles up the road at Lahinch, a sea wall is currently in the process of being built without objections and the famous snail that restricted Greg Norman's plans for the routing of the original golf course is thriving in its 'millions' despite golf taking place there for 125-years!

It must be noted that the local community is fully behind Trump's plans, the majority of them with no direct connection to the resort as members or even the game of golf in any shape or form.

The recently-formed Doughmore Coastal Protection Group fully supports the planning application. Locals say it means a 'everything for the future' to have the Doonbeg Facility in their community. For every one job that the Doonbeg Resort creates there could be a spin off of 10 others.

That's pivotal for a neglected economy on the west coast, crying out for investment and development, particulary in the tourism business. Losing the potential of a project like this in West Clare is just too horrific to contemplate and yet the Clare County Council hesitates when one catastrophic Atlantic storm could arrive overnight and wash all of those jobs and millions of euro into the ocean.

Everybody would like things to go faster. That’s just the way of life. Do we love waiting? No. Do we feel confident? Yes. This is such a big part of the local economy. We don’t want to be building a wall because it’s an expensive proposition but if we don't we won’t have protection from the waves.

We bought this property (after the 2014 storms) and rebuilt it. If we had not done so there would be a ghost, shell of a hotel here now. It would not be open.

We will not go through the expense of that all over again without securing our boundary."

Donald Trump may be a difficult man for most of us to like and admire but that doesn't mean he is always wrong and his business ventures should be impeded by small-mindedness and jealousy - especially, on the part of people not involved in the game of golf.

I feel like becoming Trump-like and telling the objectors to the badly needed 'fortifications' (it's not a wall, as such) at Doughmore Beach to butt out!

It's beyond my comprehension why planning permission from Clare County Council has not been forthcoming and the green light given to implement what will be a €30 million investment in the area.

Meanwhile, my main concern in life is always the game of golf and I can tell you unequivocably that Trump Doonbeg can stand shoulder to shoulder with any of the top links courses in Ireland - the Portmarnocks, Portrushes, European Clubs, Lahinches, Ballybunions and Royal County Downs.

If you haven't played it yet - you should.

If you won't go there because of some silly personal prejudice against the President of the United States, you are only cutting off your nose to spite your face!