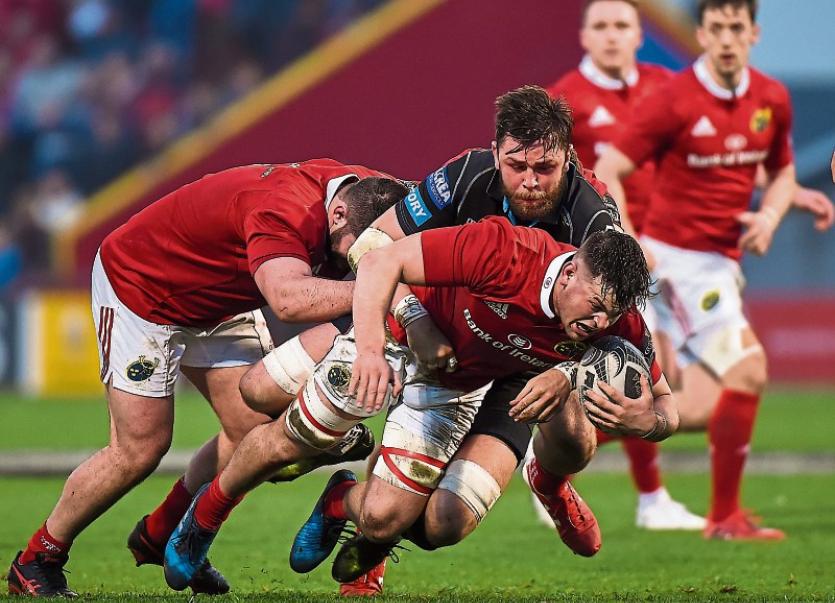 MUNSTER continued to close in on a home semi-final in the Guinness Pro12 after grinding out a 10-7 victory over Glasgow Warriors at a sold-out Musgrave Park on Saturday evening.

The win has Munster second in the table, seven points clear of the Ospreys with just three series of regular season fixtures to go. Next up for Munster is an interprovincial clash with Ulster at Thomond Park on Easter Saturday, 3pm.

Munster's win over Glasgow came at a cost, however, as influential out-half Tyler Bleyendaal suffered a confirmed concussion in the opening 10 minutes of a hugely physical contest. Bleyendaal will now follow return to play protocols. Munster may be without injured international duo of CJ Stander, ankle, and Conor Murray, shoulder, for Saturday's fixture with Ulster. The pair are also in a race against time to be fit for the April 22 Champions Cup semi-final clash with Saracens at the Aviva Stadium.

Academy player Conor Oliver turned in a Man of the Match display in Cork on Saturday evening as Munster bagged their fourth win of the season against the Warriors.

Munster Director of Rugby, Rassie Erasmsus said the form of several younger members of the squad this season is a positive.

Erasmus said: “A lot of guys this year have put their hands up, Dan Goggin, Brian Scott, Darren O’Shea, Rory Scannell remember was only a youngster last year, Sweetnam (Darren) is doing well. It’s always nice to see guys coming through who maybe were not well known names or established players before this season. We look on that as a positive.”

Asked if he was growing worried at the end of the game with Glasgow chasing a match-winning try, Erasmus said: “It (Glasgow) is a team full of Scottish internationals who were playing a quarter final (Europe) last week so they would have been used to the intensity.

“We came out of a quarter final but made all of those changes (10). There were periods of the game when we could have taken the game away from them and made it a little bit more of a comfortable win for us but then they came back, like the class side that they are, one (they took) opportunity and the game was in the balance.”