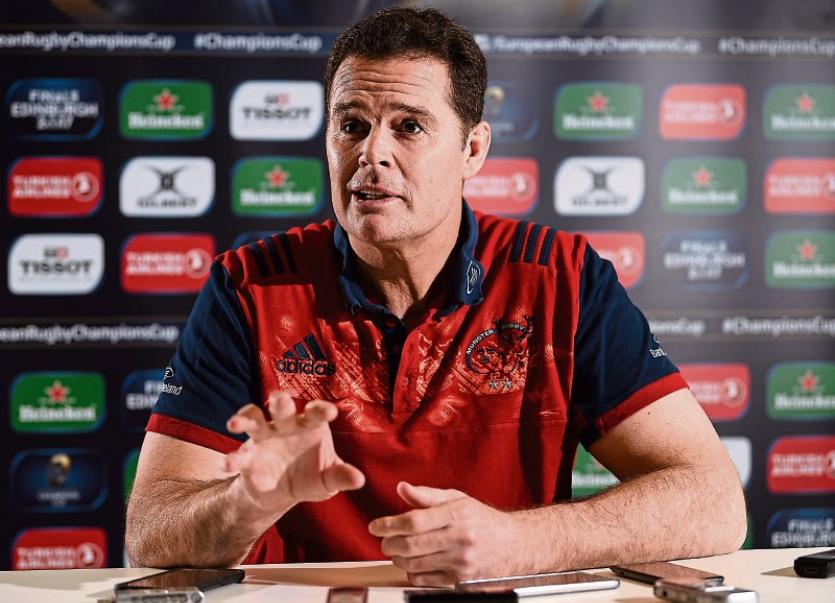 MUNSTER Director of Rugby Rassie Erasmus has admitted having formal and informal talks with the South African Rugby Football Union, but described media reports that he would return home this summer as ‘speculation.’

Erasmus confirmed the departure of Munster’s Irish international second row Donnacha Ryan from the province this summer. Ryan is reported to have signed a two-year deal with French Top14 side Racing 92.

Former Springbok Erasmus is in the first of a three-year term as Munster’s Director of Rugby.

Speaking at Munster’s press briefing at UL this Monday ahead of Saturday’s big Champions Cup quarter-final clash with Toulouse at Thomond Park, Erasmus said he did not want speculation over his future to be a distraction ahead of next weekend’s big game.

Asked about South African media reports linking with a return to his native country to take up a position there, Erasmus said: “There have been formal and informal chats the past few months. It’s just speculation at this stage. I was in South Africa my whole life, so I know the set-up really well.

“I’m big friends with the current coaches and management team. There’s been formal and informal chats the past few months. Some have been requests, some have been pure chats. It’s just speculation at this stage.

“I’ve got a contract with the IRFU and nothing’s changing.”

Meanwhile, Munster second-row Donnacha Ryan is set to leave the province after 13 years for France. The IRFU have opted not to renew his national contract and Munster could not match the offer made to Ryan by the French side.

Erasmus said: “Yeah, I’m disappointed for us but I think we have to be happy for Donnacha if that’s what he wants to do. He’s served Munster well and I guess at his age he’s got one big contract left in him. We made the best offer we could, which was for two years.

“He didn’t get a national contract again, so it was tough for us to afford him and so when the likes of Racing and those guys make you offers it’s really big money which we can’t compete with. So it’s really sad on one hand and we’re really going to miss him, but we’re happy for him.”

Meanwhile, on the injury front, Erasmus said Conor Murray is 50/50 to be available to face Toulouse next weekend due to his shoulder injury.

“He obviously had that injury and then he didn’t play the next Test match (against England), so last week we gave most of the international guys a week off against Zebre. We gave them a little bit of a rest and he was one of them.

“He’s (Conor Murray) back in today and he’s going to train with us, and we’re going to give him until Saturday morning to see if he can recover fully, and hopefully he will.