Ronan O'Mahony: 'Staying with Munster is a no-brainer' 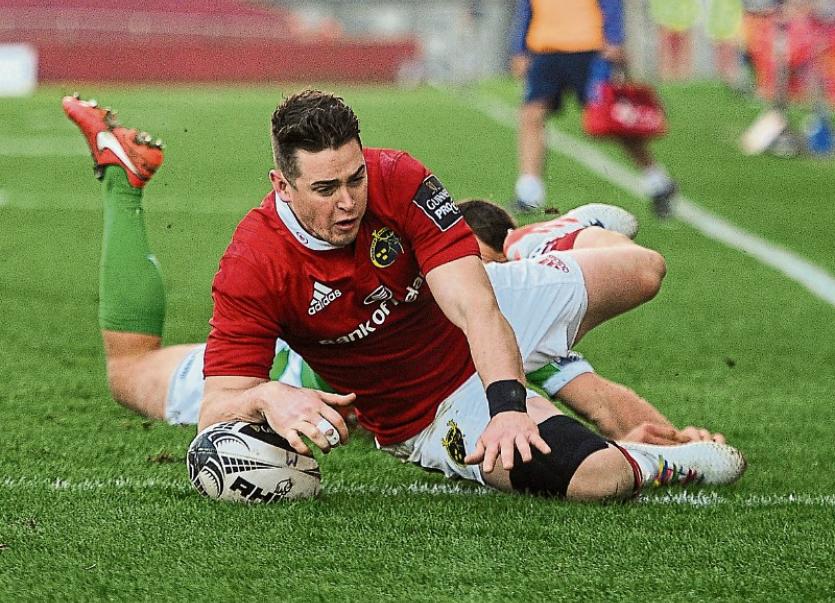 MUNSTER winger Ronan O'Mahony has described his decision to sign on with the province for a further two seasons as a 'no-brainer'.

O'Mahony has flourished in the red of Munster this season making 19 starts to date and scoring nine tries to become the province’s top tryscorer this term.

O'Mahony and his Munster team mates are currently preparing for Saturday's resumption of the Guinness Pro12 when Rassie Erasmus' charges lock horns with Zebre in Italy, 2pm.

Munster confirmed yesterday that second-row Dave Foley will leave the province this summer for a move to French Top14 side Pau.

While U-Bohs clubman Foley is set for a switch to France, winger Ronan O'Mahony is looking forward to Saturday's chance to impress in Italy ahead of Munster's Champions Cup quarter-final with Toulouse at Thomond Park on April 1.

Ronan O'Mahony said: “Munster is where I grew up. I have played all my rugby here. I am really enjoying it so far and especially this season.

"It was a no-brainer for me really (signing a new contract). This is where I want to play my rugby. I am loving it at the moment.

"I was coming off a development contract when I signed my first full professional contract.

"I felt if I got a bit of game time I could show my worth with Munster. Obviously, in my time involved here, there has been three or four different head coaches.

“It has been constantly changing and coaches have different preferences in terms of players they like. I said I would sign that two year and see how it went.

"Obviously I got a good bit of game-time and leading into this season and signing another two-year, ya, I'm delighted."

O'Mahony agreed that the game with Zebre provided an opportunity to stake a claim for inclusion in the side to face Toulouse.

"You want to give Rassie a headache as regards selection, definitely. With Toulouse next week and Zebre this week, there are a couple of spots still up for grabs and this is the last chance for fellas to say this is why I should be selected and give him a good headache."