Desmond League titles for Ballysteen and Newcastle West B 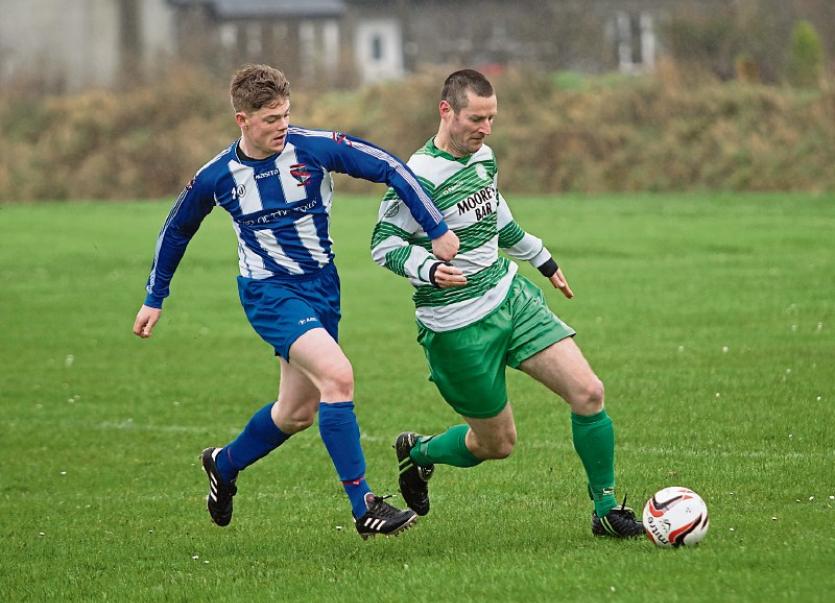 IT was a busy day for trophy presentations on Sunday, with Ballysteen and Newcastle West B being crowned Champions of Division 2 and Division 3, respectively.

Ballysteen went into their game away to Bally Rovers knowing that the title would be theirs with three games to spare if they were able to record their 13th victory of the season.

They got off to a good start when John O’Shaughnessy opened the scoring but fell 2-1 behind when Micheal Thornton and Killian Lenihan scored for the home team.

Jack Neville eased Ballysteen nerves when he equalised just before half-time. Neville put the visitors in front in the second-half and Ed Gallagher and Dara Ranahan then got in on the scoring act to leave the final score at 5-2.

After the game, the trophy was presented to captain Declan Sommers by Limerick Desmond League secretary, Eddie O’Shaughnessy.

Ballysteen won the title with an unbeaten record of thirteen wins and two draws. The crucial result came in early January when they won 4-0 away to Adare United, who were three points ahead of them going into that game.

Great credit is due to manager Brian Barry, his assistant, Mike Neville, and all the players.

The situation in Division 3 was that Newcastle West B and Ferry Rangers were level on points going into the final series of games.

To win the title on the day and avoid a play-off, one team had to better the result of the other and that’s what happened when Newcastle West won 2-1 away to Glantine B, while Ferry lost 1-0 at home to Knockaderry, for whom Keith Danaher scored from the penalty spot midway through the second-half.

Jason Cummins was the hero for Newcastle West B, heading the opener just before half-time and making it 2-0 with another header in the 55th minute.

Glantine pulled a goal back in the 84th minute with a direct free-kick into the top corner from Anthony Flynn which made for an interesting finish.

As skipper of the side, Cummins was presented with the trophy after the game by Limerick Desmond League Fixtures Secretary, PJ Hogan, as manager Ambrose Kelly and assistant manager Thomas Geary proudly looked on.

Note: Newcastle West B are Division 3 Champions and Ferry Rangers are runners-up