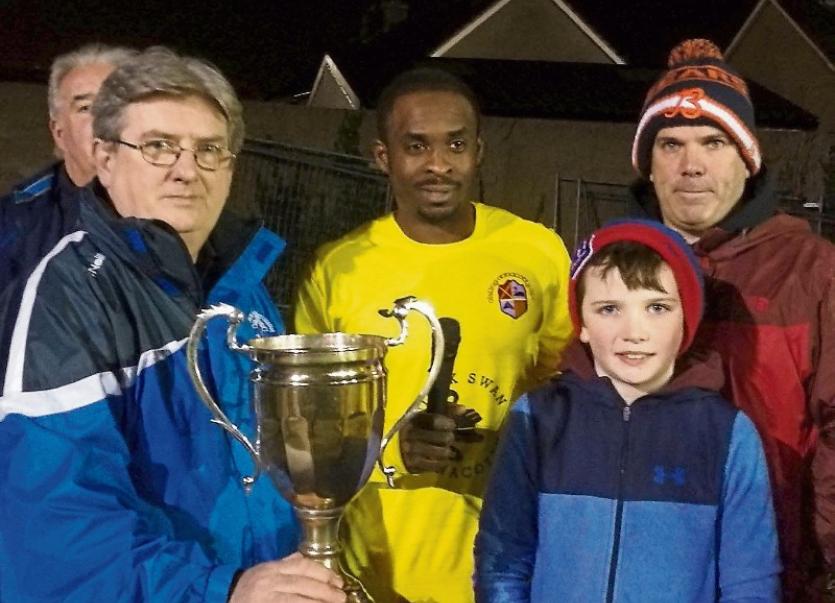 FOLLOWING Leicester City's surprise success in 2016, Aisling Annacotty ensured 2017 will also go down as a year of the underdog following their 2-1 win over favourites Janesboro in the final of the Tuohy Cup at Jackman Park.

While Aisling's success is not as momentous as Leicester's win, it is just as gratifying for those involved.

Keith Mawdsley gave Aisling a first half lead from the penalty spot in Thursday night’s final. Former Aisling player Aidan Hurley restored parity after late in the game also from the spot.

As flagged in the preview to the game, Evan O'Connor's return from injury to top form is a godsend to McCarthy's men and he will remember his winning extra time strike for what should be as long career.

Mike McCarthy, with the assistance of John Lysaght and Dermot Clune, took on the reins at the start of the season and built virtually a new squad. Of the starting eleven on Thursday, only two player, Brian Butler and Keith Mawdsley were with the side last season.

The Annacotty side have been giving hints of their potential throughout and have clicked at the right time.

The last top flight success to come their way was back in 1978 when they defeated Geraldines in the final of the now retired Saxone Cup before their amalgamation with Annacotty, a year after the Tuohy Cup was first fought out.

Aisling become the 13th team to add their name to the famous trophy and few in the soccer world would begrudge them their success.

Janesboro came into the tie on the back of a heartbreaking FAI defeat to Killarney last weekend and the loss of a number of key personnel did not help their cause.

Top scorer Shane Clarke was forced to sit out due to suspension but 'Boro welcomed back long term injury casualty Kevin Barry to slot in. Steven Bradley's return was also a boost to Janesboro.

The game was played at a hectic pace for the most part.

Irish International Danny O'Neill was proving an early threat for 'Boro and he delivered a good ball for Adrian Power but he fired into the side netting.

The deadlock was broken on 15 minutes. Oisin Kelly held up the ball well before laying off to Aisling captain Chimka Manjor, who showed a sublime touch to evade his marker before being fouled by Steven Bradley.   Keith Mawdsley stepped up and expertly converted the spot kick.

'Boro responded well and Kevin Barry headed just over and Barry turned provider setting up John Tierney who fired low at near post only for Walsh to save with legs out for corner.

Aisling twice got in down 'Boro's left, O'Brien crossed but Mawdsley blazed over and a good ball from Kelly was superbly cleared by Hurley at back post.

Just before half time Boro were awarded a free kick 25 yards out, Harkin curled it beautifully with his left, beat the keeper but het ball cannoned off crossbar.

The second half kicked off with 'Boro still chasing the equaliser. Mike Ryan sent Adrian Power in behind the Aisling defence but he was unable to keep his effort on target.

Janesboro's hopes took a blow on the hour mark. Neil O'Brien gathered the ball at full back and put Evan O'Connor away down the left and when Thomas Clarke fouled he received a second yellow card. Shane O'Hanlon joined him as a result of his protestations.

Mawdsley latched onto a poor back pass only to be thwarted by a superb Hurley challenge and minutes later Tierney did well to pick out Waters, whose effort beat Walsh but not for the first time this season, Damien Collins was in the perfect position, to clear his lines.

With ten minutes to play 'Boro got their reward.

A good run and cross by Harkin found Tierney. He seemed to be fouled but the ball ran for Mike Ryan and when he burst into the box, he was adjudged to have been fouled by Collins. Hurley stepped up and fired straight down the middle but Walsh, despite getting a touch, was unable to stop it from creeping over the line.

In a frantic finish, Harkin and Jamie O'Sullivan went close for 'Boro while Mawdsley had a great chance to snatch it on 90 minutes but fired wide of the mark.

Walsh was the busier of the two keepers in extra time but Aisling got the break just at the start of the second period.

Brian Butler picked up the loose ball from a challenge on Mawdsley and put Evan O'Connor away on the right. The winger cut inside his marker and racing onto a deflection from Evan O'Neill proceeded to evade two challenges before hitting a left footer past the keeper for a superb goal.