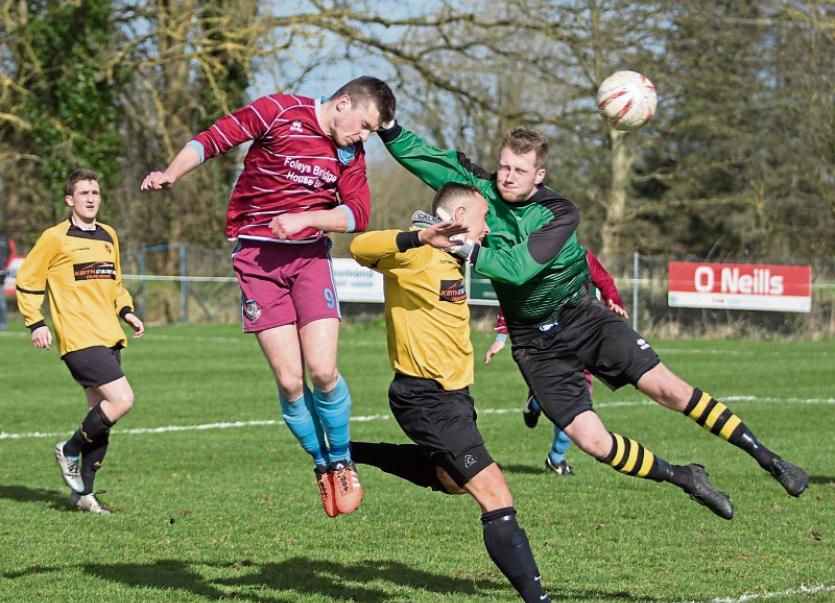 BROADFORD United became the first Limerick Desmond League team to reach the semi-finals of the Munster Junior Cup since Askeaton were beaten by Johnville in the Final in 1993 when they upset the odds with a well-deserved 1-0 win at home to Limerick District Premier side, Aisling-Annacotty, on Sunday afternoon.

Broadford were the better team in the first-half and not just because they were playing with the strong wind. They competed for every ball, showed great composure on the ball and always supported the man on the ball.

The large home crowd thought that Broadford had opened the scoring in the 18th minute when Micheal Brosnan met a Timmy Larkin cross with a powerful header to the back of the net.

However, linesman Tony Fitzmaurice deemed that Brosnan was offside and referee Ger O’Connor disallowed the goal.

Brosnan, who excelled yet again in the centre of midfield, came close again three minutes later when he controlled a penetrating pass from Ray Lynch and unleashed an angled shot which produced a fine point-blank save from Stephen Walsh.

Broadford did eventually get their deserved opener in the 35th minute. Midfielder Willie O’Brien split the defence with a precise threaded pass to Brian Hannigan and the left-back showed the clinical finishing of a striker when he drilled past Walsh from an angled 10 yards.

Having played with such a strong wind, Broadford would have preferred to have a two-goal cushion going into half-time and they would have got it but for Walsh making a super save from Brosnan, who met Lynch’s free-kick with a spectacular control and hook volley.

Walsh made it a hat-trick of excellent saves in the 76th minute when he leapt high to touch over a swerving piledriver by substitute John Paul King from the edge of the box.

While that was the best goal attempt of the second-half, Aisling dominated possession in that half but were continually frustrated by excellent from the Broadford team as a whole.

There were great celebrations at the final whistle. Broadford join Pike Rovers, Fairview Rangers, both of whom qualified last week, and St Michael’s who beat Dungarvan 4-2 in extra-time on Sunda, in the last four

Newcastle West B 4 Feenagh B 0