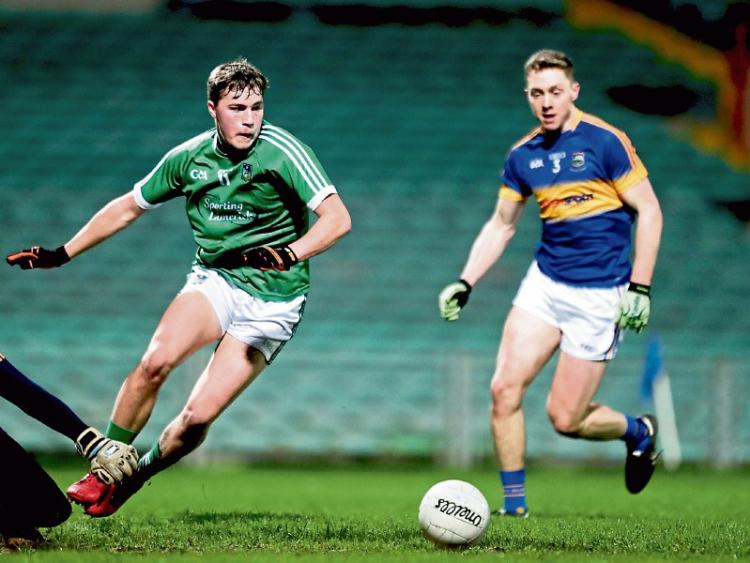 FOOTBALL in Limerick has always eaten at the servants table and only now and again has it been allowed enter the dining room.

Hurling is the DNA by which most GAA people in Limerick operate from and only a small core group kept the football flag flying during many difficult days.

Football of course is played by many clubs in Limerick but for the vast majority it lies far behind hurling. Limerick is viewed as a hurling county but like others around the country they have been falling well below where the top teams are at.

Trying to develop football in Limerick will always test the qualities of those trying to lift standards but if they can take some of the passion and heart shown by the Limerick U21 team last week against Tipperary then they might just find a way forward.

By any standards this has to be viewed as an outstanding result by this group of players and management. They faced hot favourites Tipperary and were given little chance of advancing in this contest.

This was a superb win by this group of players. They worked really hard and each man left all that he had on the field. They expressed themselves and were full value for their win.

Tipperary had many quality players from the team that won the All-Ireland minor title a few years ago so make no bones about it this was a win of some importance.

Playing football for Limerick is always done in the shadow of the hurlers but over the years players have played a key part in bringing some respect to the big ball game in Limerick.

I have always admired how they have gone about their business. Most of their talking is done on the field. They have had good days but also many difficult days.

Limerick have slipped well back in Munster and have fallen well behind the likes of Clare and Tipperary. The journey to success will take a good while but you get the sense that much of the work now will reap some reward in the future.

John Cregan is Chairman of the Limerick Football Board and says last weeks win was much needed. “With no disrespect to any other team I did say before the game that the game against Tipperary might be the most important game of football we would play this year.

“I know the sort of work that the management have put in and it was just great to see them rewarded with a win. I know we could be in a Munster final or out of the championship by the time the “Leader” comes out but either way it’s a great step forward”.

The most important statement Limerick football has made in recent years was when they decided to establish the underage academy.

They have seen what others have done and having watched them on a few Saturday mornings it’s good to see young lads wanting to play for Limerick.

According to Cregan it was the only way forward, “Look we had to take that step. It will take time and we are in the early days but for me as Chairman I am really happy with the effort everyone is making.

“Paul Kinnerk is heading up the Academy and he is really well supported by many former players. It will take a few years to bring these players forward but I am delighted to see young players wanting to play for Limerick and to me it is the first vital step forward.

Paul has a great plan in place while Muiris Gavin and others are also playing key roles.

“The Academy is about developing young players, some will make the grade others will find it difficult but either way they will be in a better position to serve their clubs going forward.”

Limerick have slipped well back at senior level over the past few years and results so far have seen them struggling both at home and away. Promotion will have to wait for another year and the championship could also be difficult as they try and develop the foundation of the team.

John Cregan says it going to take time: “What I would like to see most of all from Limerick is that they become competitive again in Munster. To me this is our yard stick. We had great players that led the way and were so unlucky not to win a Munster title.

“Many of those players could match the best in the country. It will take time to build a bunch like that again but I am confident we are going in the right direction. We have many great people working hard from the GDA’s to the people in clubs and also the many people working with our schools. We respect that hurling is the main game in Limerick and that won’t change.

“Our task is to do our job well and bring as many players forward as we can, by doing so we will expand the game and that we hope will help Limerick going forward.”

Cregan has a great passion for Limerick football. The Drom/Broadford club man is well focused on what needs to be done but also very aware of the challenges.

He has managed to bring new people on board but of even more importance he has a vision of where he would like Limerick football to be in the years ahead: “I think through the help of many we are now building from a new foundation. We had to start brick by brick and that will take time.

“If we look at the sort of progress some players are making. I saw us losing to Cork at minor level three years ago. We were blown away and beaten out the gate. We took it on the chin. Only five of that team are on the current U21 team.

“That’s a fair turnover of players. The next part of the jigsaw is to get it right at schools level and we will. I see how some clubs are moving with the times and in some cases we are learning from them. That to me shows that we have clubs and players wanting to be better. Where that is the case progress will follow.”

For the first time in many years there is some light at the end of the tunnel for Limerick football. For sure they will endure some hard days ahead but at least now we are starting to come to terms with the tools needed to compete at the highest level and it’s best to leave the last words to John Cregan,

“We are coming from a low base, the desire of our players and our volunteers is going in the one direction and from where I stand now lots of work is going on and I feel that will serve Limerick well into the future.”