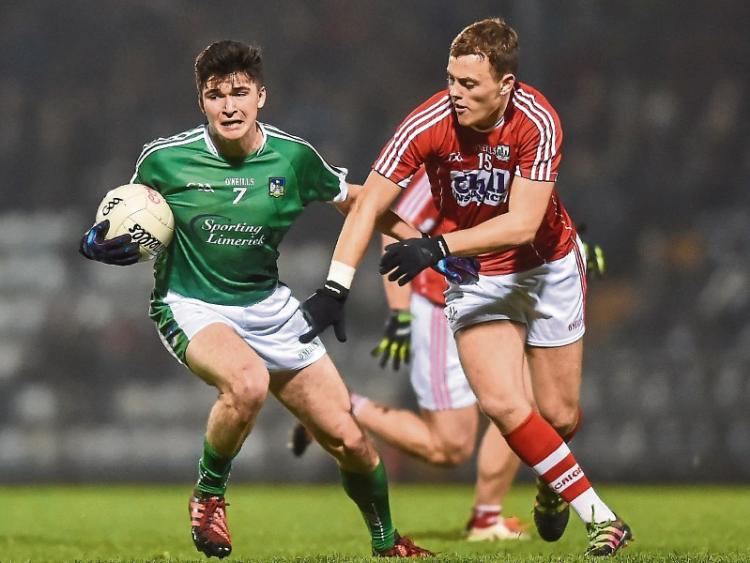 THE Limerick U-21 footballers just fell short of a Munster final spot this Wednesday night.

The final score was Cork 2-10 Limerick 0-10 in Pairc Ui Rinn in the semi final of the Munster U-21 Football Championship.

It’s now a March 29 final between defending champions Cork and 2014 minor champions Kerry, as Limerick are left to ponder a near miss.

Limerick bossed much of the first half to lead 0-9 to 1-4 at the break and that was without injured captain Killian Ryan and the suspended Josh Ryan.

Declan Brouder’s side were 0-8 to 1-2 clear but Cork found late scores in the half.

It was a 30-minutes that saw a Limerick penalty saved from AJ O’Connor with Cork goalkeeper Ross Donovan doing well to deny the Newcastle West man. That was five minutes from half time and when Limerick were 0-7 to 1-2 ahead.

Hugh Bourke and Kieran Daly points had a lightening start for Limerick.

But Cork found the net through Michael Dineen to settle the home side.

Undeterred Brian Donovan (2) and a Bourke free had Limerick 0-5 to 1-1 ahead just after the 10-minute mark.

Bourke and Brian Coakley exchanged frees to leave it 0-6 to 1-2 after 20-minutes.

AJ O’Connor pointed from play before the saved penalty.

Not rattled by the save Limerick increased the lead when goalkeeper Richard Hayes was brought from between the posts to land a free for a 0-8 to 1-2 lead.

Then came back-to-back Cork scores just after they had brought Michael Hurley and Sean O’Donoghue into the game from the bench.

The final score of the half came from a Bourke free to leave Limerick two clear at half time.

The Cork run of scores continued after half time with Coakley and Stephen Sherlock moving them 1-7 to 0-9 ahead.

Hugh Bourke hit back to steady Limerick and level the tie with 40-minutes played.

But that was to be the last Limerick score.

The next 13-minutes were scoreless and Limerick did have chances but two points in a row from Michael Hurley had Cork a goal clear.

Then came a Limerick shout for a penalty but Clare referee Rory Hickey waved away appeals.