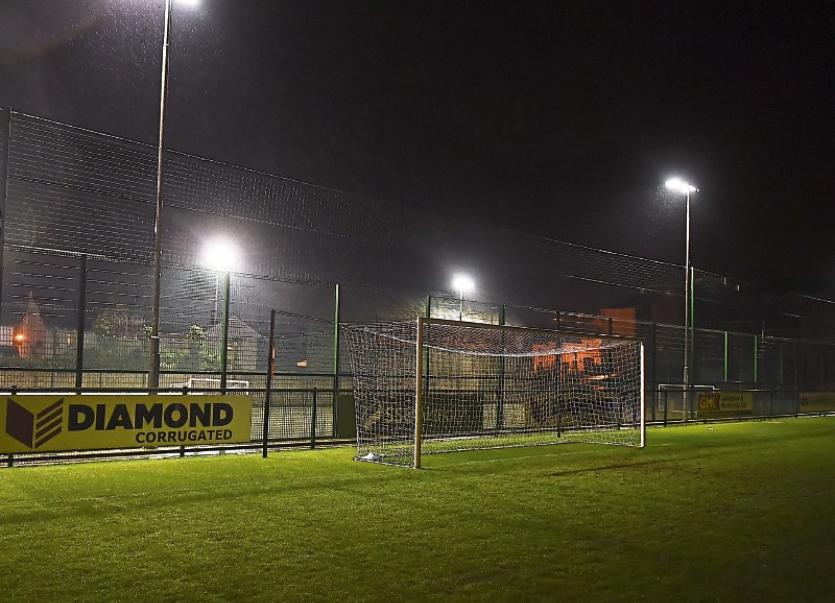 The scene at Maginn Park, Buncrana after the floodlights failed in Limerick FCs Premier Division clash with Derry City on Friday night

The sold-out Premier Division tie had been tied 1-1 after 25 minutes when the floodlights went out at the Co Donegal venue.

Martin Russell’s Limerick FC, fresh from their 5-1 opening night win against Sligo Rovers, had taken the lead against Derry thanks to Dean Clarke after six minutes.

However, the Candystripes equalised 12 minutes later through a Ronan Curtis free-kick.

However, the entertaining top-of-the-table clash was halted abruptly when the floodlights went out at the match venue and some minutes later, it was announced that the game was being abandoned before the ground was evacuated.

Limerick FC players, management and supporters were left hugely frustrated by the developments as they faced a 460-mile, 10-hour round trip to attend the game in Buncrana.

Derry City are using Maginn Park for their home fixtures at the start of the 2017 season as redevelopment work is continuing on their Brandywell home.

It was later confirmed by Limerick FC that the abandoned fixture with Derry City has been rescheduled for Tuesday, March 21 at Maginn Park, 7.45 pm