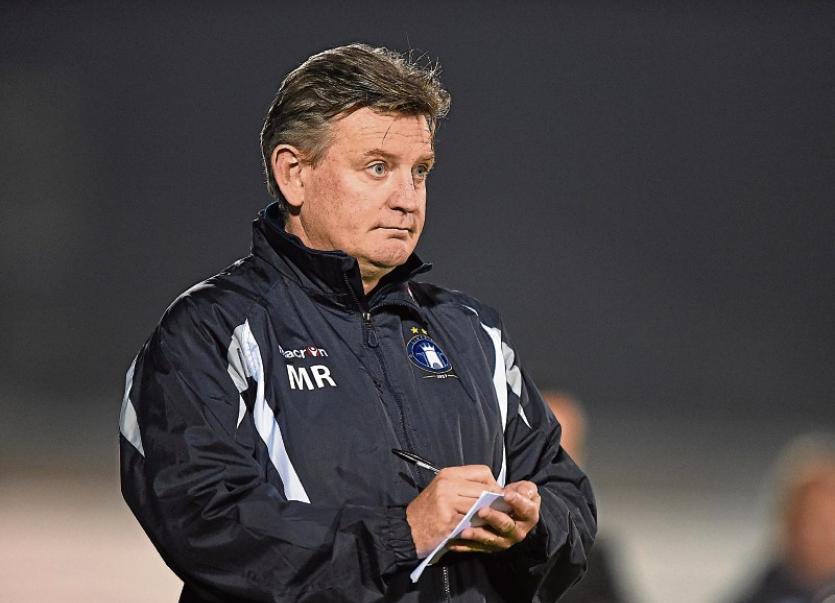 LIMERICK FC manager Martin Russell says a top half finish on their return to the SSE Airtricity League Premier Division is a realistic ambition for the Blues.

Limerick return to the top flight of the League of Ireland when the new season kicks-off this Friday night with a crucial home fixture with Sligo Rovers.

Manager Russell also believes Limerick FC are in a much stronger position than in 2015 when the Shannonsiders suffered a dramatic relegation to the First Division.

Russell said Limerick's ambitious plans for the future and the club's desire to be a force in the Premier Division convinced him to extend his time as club manager into 2017.

Russell explained: "What happened at the end of last season - and it is common - clubs tend to plan from season to season. If they don't know the budget for the following season there is always that period where people are saying what way we can go?

"The club had to decide its path in terms of how strong a budget it can have and if I was going to be the one to lead it. Then I would have to reflect on it.

"It is a rolling contract and there is that period in the season where the club can say, 'thanks, but no thanks' which is fair enough and equally, I have the opportunity that if sometime happens, if it's not right, then you can move somewhere else. That was the case last season

"We sat down around the table and the plans were still ambitious in that Limerick want to be a force and I felt if I could be part of it then, I was more that happy to go on with that.

"For me, personally, I have never had a budget to attack a top half position or a European spot until probably now.

“With UCD it was more about developing young players. The one thing UCD always lacked was having that senior four or five players that would help me propel them into Europe.

"When I first came to Limerick that budget had been in place, but it was taken away the following season, so rightly the budget last season was by way the best one in the First Division. We proved ourselves to be the strongest side.

"Now we are back at a platform where, yes, I think we have a budget to compete in the top half and have a fighting chance for Europe, so as I said part of the thought process in the closed season was if it was viable. For me it seems to be.

"There are definitely different levels between the First Division and the Premier Division.

"Again you go back to last season, why were we top of the First Division - it was because we had the best set of players. That is basically the reason.

"We have a set of players at this moment in time, I think, who can compete in the top half. When it is as tight as it is going to be, you need to be that bit of luck here and there to help things along the way.

“I see it as being a very tight league with every team capable - from bottom to top - of causing each other problems. It is going to be interesting to see each game, what the outcomes are and who manages to prosper."

"There is a big difference between now and 2015, in terms of the infrastructure, having the Markets Field and what that brings, the atmosphere and what it cane bring and also the playing competition.

“There is more competition in this group, more quality. There are indicators that we can be positive and look forward to being competitive.

"For me, an ambition to finish in the top half is a realistic one. Why not?”

“I am pleased we have a strong group, we will give it our best. If things don't work right, we will try and be honest, see how we can make them better. That is the way we play it.

"If it is good enough, brilliant. If it is not I will try again, I will keep working towards being a better coach and manager as it goes on, also encourage the players to do that. I think we have to stretch ourselves.

"I think the pressure is to be the best we can be and to get the rewards from that.

"We will test ourselves in those opening games. It is important we get a good start if we can which will help us.

“Having said that Sligo didn't have the best start last season and they finished it strongly. It is a long season, 33 games where everyone plays each other and at the end of it we will see where we are.

“We want to really make an impact in the top half, that is our aim."

Russell agrees that a good start for Limerick would provide a significant boost as the Blues look to consolidate their position in the Premier Division.

"We play Sligo in our opening game on Friday and it is great to have them in the Markets Field. They finished fifth last season. They finished with a flourish because they had an awful start.

“They are the side which has been on the up and they will think Europe is a possibility for them this season and rightly so, because they have strengthened.

"Our two games after that are against two sides who finished first and third in the Premier Division last season.