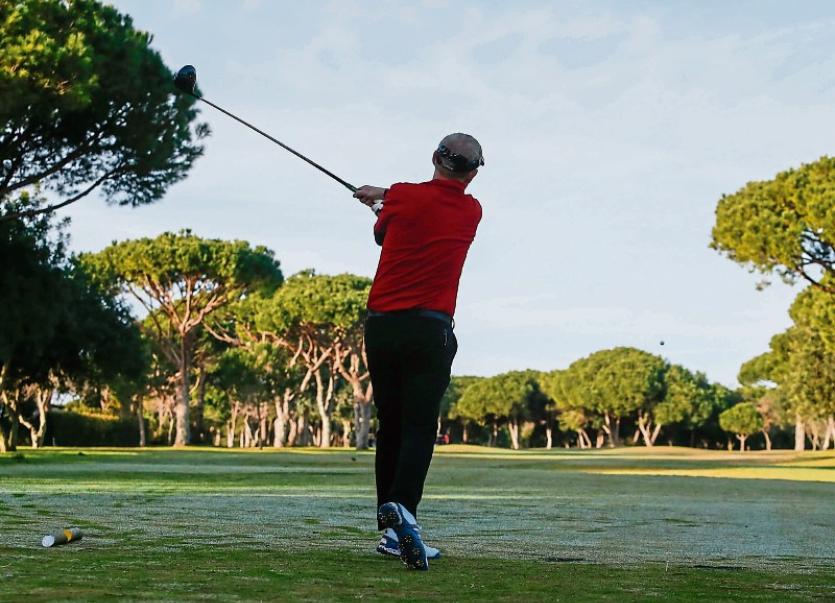 Jeff: Hi Mutt! I hear you have been laid low. Is everything okay?

Mutt: Apart from being knocked unconscious and sliced open by a surgeon's knife I'm grand and making a good recovery, thank you.

It has provided me with the opportunity to watch lots of sports on TV and the highlight of my couch potato existence (as long as it lasted) was seeing a replay of Iron Byron (the equipment testing machine) holing out in one at the notorious 16th hole during the Waste Management Open in Phoenix.

How cool it must feel to invent a machine capable of shooting an ace in front of 25,000 spectators?

Jeff: I just love watching Iron Byron hitting balls. I played the best golf of my entire life for about 6-weeks after being transfixed by it up close and personal at the USGA HQ in Far Hills, New Jersey a few years ago.

The mesmerizing motion of that one-armed contraption hypnotized me!

Mutt: Could you not remember what you were doing? Why didn't you write it down?

Jeff: It wasn't technical. It was all to do with rhythm, timing and a feel good factor. I have only occasionally managed to play my best when it mattered most because playing good golf is attitudinal and how one engages the brain.

Mutt: A lot of golfers have that same complaint. If you were watching the golf from Phoenix can you tell me what was 'Green Saturday' about?

Jeff: It had nothing to do with Ireland or Shane Lowry's 'great' 66 on 'Green Day.' Although I watched 90% of the coverage, I never saw Shane hitting a shot.

We Irish need reminding that we don't count as much as we think outside our own shores. Everything Irish golf-wise is centered solely around Rory McIlroy as the number of pros we have on the ET and PGA Tours dwindles alarmingly.

Mutt: Lowry 'stalled' on Sunday. There was no reason for him to be on TV. In a way I'm glad he wasn't covered because guess what he did at the 16th hole? He threw cans of Guinness into the already well-inebriated gallery.

I would have enjoyed seeing those goons pulling the safety clip and drowning themselves in fizzy, black stuff.

Jeff: It's what they deserved at a golf tournament where the bars opened and the drinking started at 7am. Can you imagine? There should be no place for that in golf.

Mutt: Some say Phoenix would be an ideal venue for the Hyper Cup. Boy, wouldn't the Organizer's of that event love to have such crowds spending fortunes on booze and merchandise from dawn until dusk?

It would bring the 'over the top' antics at Haseltine up another notch. If you provide 100,000 people with unlimited amounts of booze and encourage them to become part of a TV Celebrity Show, it shouldn't be a surprise when they get over-excited enough to assume leading roles.

Jeff: The green connection revolved around the sponsor (Waste Management) encouraging the fans to support sustainability and environmental initiatives. As usual, collecting money by getting drunk for a 'good cause' is at the heart of it.

100% of the waste generated at the tournament is repurposed for beneficial reuse with 0% of the waste sent to landfills. All aluminum cans, plastic bottles, cups and containers and signage are reused, recycled, composted or 'recovered' for energy.

To be fair, that's a remarkable accomplishment. Amazingly, the Phoenix Open has been in existence for 82-years and it is now the fifth oldest event on the PGA Tour. That it is bordering on the wild side of unsavoury for reasons that I cannot mention here is regrettable.

Mutt: Golf is all I am interested in and the final round in this year's Phoenix Open was another reminder that little by little the Asians are taking over.

The inform Japanese, Hideki Matsuyama, won for the second time and is now arguably the best golfer in the world with 5-wins in his last 9-starts.

He is the hot favourite to win this year's Masters. Place your bets!

Jeff: I agree that Matsuyama is the brightest star in the galaxy right now. He hits the ball over 350-yards regularly and his iron play is deadly. His only weakness is his putting but not in the holing out department. He doesn't hole many long ones. If he did, he'd run the tables.

Mutt: He plays so well he is never that far away from the hole. There is an Asian Invasion about take over world golf in the next decade. This year could be the start of it with Matsuyama, Ryo Ishikawa, Seoul Yun Noh, CT Pan and Beoung Hun An all in the vanguard but there is a host of others on the way.

Jeff: It's remarkable that we in Ireland continue to pat each other on the back and say how great we are but we have never had so few representatives on the main golf tours.

Apart from Rory we are being outgunned left right and centre by the English, French, Spanish, Italians, Swedes, Danes, Australians and South Africans. I haven't even mentioned Americans!

I think I know why but nobody in 'deluded high places' is interested in hearing any bad news even if it is the obvious truth. Forget Donald Trump - the Irish are the world's masters of 'fake, alternative news.'

You aim the clubface, but you align your body.