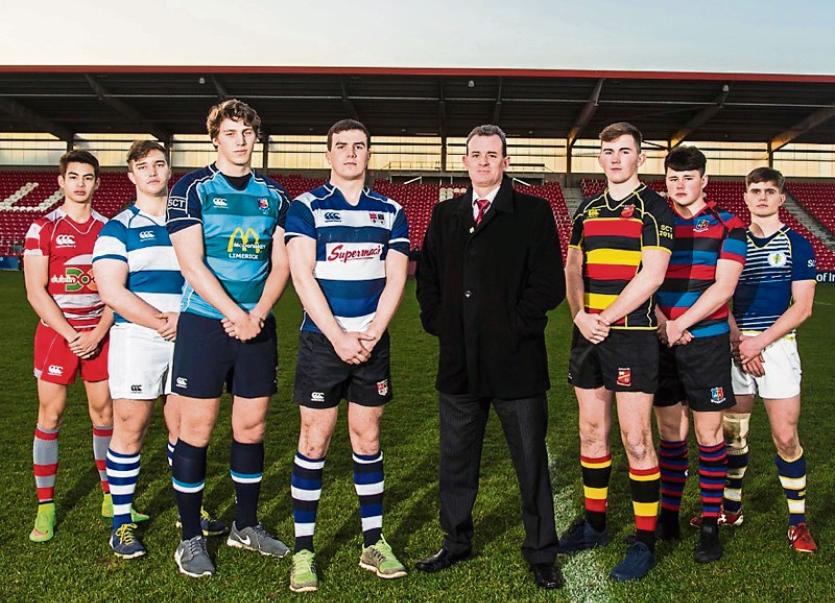 SIX Limerick schools will be among the 10 sides looking to claim the 108th Clayton Hotels Munster Schools Senior Cup title when the competition kicks-off this Tuesday, January 17

The five winners from this week's opening rounds fixtures will be guaranteed a quarter-final place with four of the beaten sides playing off in a qualifying game the following week.

One of the beaten sides will be a lucky loser and also be given a quarter-final spot. After this week’s round of games the competition becomes straight knockout.

Crescent College have been the most consistent of the Limerick sides in the Senior Cup in recent times, winning the title in both 2013 and 2014, while the Dooradoyle school are also the reigning Junior Cup holders.

Eleven members of the Crescent squad were involved in 2016 when the Dooradoyle side lost out to CBC in a nail-biting final at Musgrave Park.

The Crescent side, captained by the exciting John Blake, includes Munster U-18 players in John Hurley, who was also involved in the Ireland Schools training camp over Christmas, as well as Daniel Feasey and Fintan Coleman.

Under the guidance of Garryowen FC head coach Conan Doyle and assistants Eugene McGovern and Declan Edwards, Crescent are sure to be well prepared for the rigours of the Cup, especially with several key players returning from injury, although their friendly results could have been better.

The Dooradoyle side face a difficult opener against holders CBC at Musgrave Park on this Wednesday, January 18 (2.30pm)  in a repeat of the 2016 decider.

St Clement's, under head coaches Shane Mullally and Brian Downey, have qualified for the Senior Cup proper for a second successive season, which is no mean feat in itself. To date, the Limerick city side has defeated St Anne's Killaloe, High School Clonmel and Bantry in their final outing at the end of November.

Five members of the side captained by scrum-half Aran Hehir, including the skipper himself, flanker Shane Brosnahan, hookers Derry Gleeson and Adam Ahern and out-half John Bateman have been involved with the Munster Club side this season.

With close on 20 members of their squad bringing Cup experience from 2016 with them this term, St Clement's will be hopeful of making a big impression.

The Murroe side is captained by the highly rated Rory Clarke, and Ben Healy has been involved in the Munster U-19 and Ireland U-18 squads as have Mark Fleming and Luke Fitzgerald, while Ben Maloney and George Downing have featured at Munster U-18 level and Andrew Hogan, Ronan Quinn and Padraic Mulligan have seen action at Munster U-17 level.

Ardscoil, boasting an impressive backroom team which includes, coaches Gerry Casey and Conor Glynn, together with manager Enda Gavigan, can call upon up to 18 players who were involved at this level 12 months ago.

The North Circular Road side also boast a healthy number of players who have representative experience, including Evan Cusack and Odhran Ring who have played at Munster U-19 level and the likes of Daragh O'Grady, captain Craig Casey, who has also been involved with the Ireland U-18 Schools squad, James McCarthy and Luke Clohessy who have represented the Munster U-18s.

Meanwhile, St Munchin's College. who must go back 11 seasons for their last Senior Cup success kick-off their 2017 campaign against Rockwell College at Clanwilliam also on Wednesday, January 18.

St Munchin's, who have experienced back-row forward David Quinlan as head coach, have nine players from their 2016 campaign in their squad this time round.

Castletroy will be wary of their first round opponents Bandon Grammar School following their exploits in last season's Senior Cup when they stunned St Munchin's College.

The 2017 Munster Schools Senior Cup promises to be one of the most exciting and open in years, although the Cork sides, CBC and PBC, and Tipperary heavyweights Rockwell College will be fancied to emerge as strong contenders once again. Let the games begin!