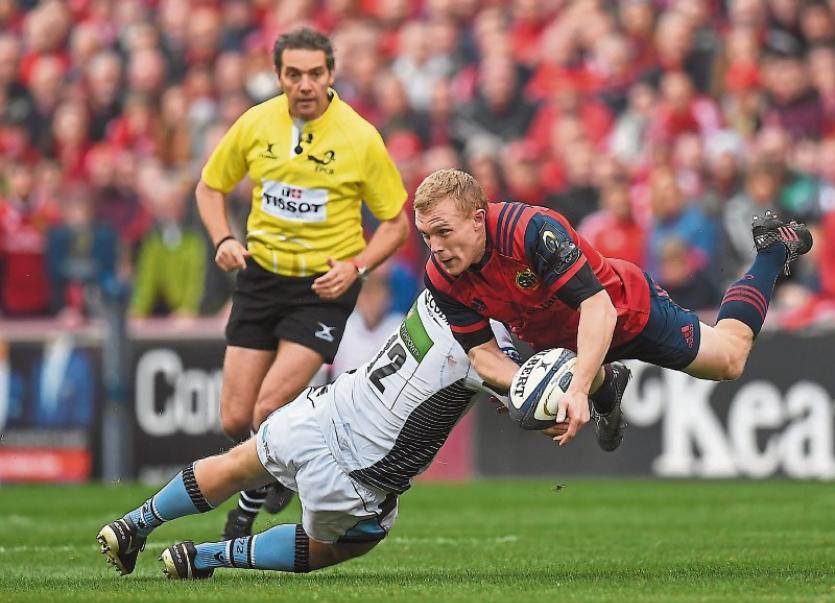 MUNSTER have made four changes to the side that defeated Racing 92 in Paris for this Saturday’s crunch Champions Cup clash with Glasgow Warriors at Scotstoun, 5.30pm.

Victory for Munster in Scotland would secure their place in the quarter-finals of the Champions Cup for the first time in three years.

Flanker Tommy O'Donnell, who sustained an ankle sprain against Racing 92, is ruled out of the Glasgow clash due to an ankle injury. O’Donnell will continue to be observed by the medical team. Munster remain hopeful that the Ireland international will only require a short-term rehab for the injury.

Three of the Munster changes for the trip to Scotstoun are in the pack and one in the backline.

In the front row, loose-head prop Dave Kilcoyne starts this weekend with Niall Scannell and John Ryan continuing at hooker and tight-head respectively.

Donnacha Ryan switch sides in the second row where the Irish lock is joined by Jean Kleyn, who has overcome last week's illness to make his first European start for the province.

Jack O'Donoghue takes the place of the injured Tommy O'Donnell in the back row as captain Peter O'Mahony and CJ Stander continue at blindside and number 8.

Conor Murray and Tyler Bleyendaal are again the half-back pairing, with no change to the midfield partnership of Rory Scannell and Jaco Taute.

The final changes sees Keith Earls start on the wing this week joining last week's try scorers Andrew Conway and Simon Zebo in the back three.

Meanwhile, back-row Robin Copeland is unavailable for selection this week after sustaining a thumb injury against Doncaster in the B&I Cup game last weekend. Copeland will undergo surgery next week and is expected to be ruled out for 6-7 weeks.

It has also been confirmed that Sam Arnold, who sustained a knee injury in the same Munster A fixture, will be sidelined for approximately 8 weeks.