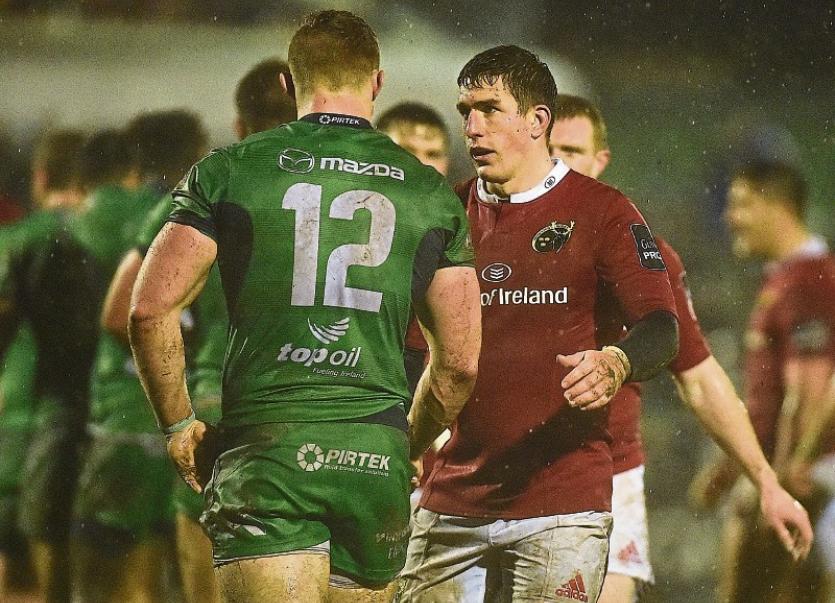 MAN of the Match Ian Keatley praised the Munster forwards’ effort in the wake of their hard fought 16-9 Guinness PRO12 victory over champions Connacht at the Sportsground on New Year’s Eve.

Munster cemented their place at the top of the PRO12 table after scoring their first win in Galway in three attempts.

Keatley kicked 11 precious points in difficult wet and windy conditions, while his clever crossfield kick in the second half help earn the field position which ultimately led to hooker Rhys Marshall touching down for the game’s only try.

Afterwards Keatley said: “We had lost here the last two years. We know how good Connacht are, PRO12 champions last season and always pose a phenomenal threat with their attacking game.

“We put in good plans to nullify that and I think we came up trumps today and maybe the rain was a factor in stopping them playing.”

Keatley said his decision to kick crossfield out of defence in the lead up to Marshall’s try was an example of following the advice of Director of Rugby Rassie Erasmus and defence coach Jacques Nienaber.

“In fairness Rassie (Erasmus) and Jacques (Nineaber) always preach just play what you see, even if it is on your own tryline, so I saw the space, kicked to the space.

“It was a great take by (Andrew) Conway and it led to two further kicks. We put them under pressure and got a maul over try.

“The forwards win us games. They have been winning us games all season. They came up trumps again tonight. Sometimes the maul didn’t quite work, but we kept at it. A few of the backs probably got bored out there, but we said we had to stick to the game plan and we did that and got the win.

“I work hard on my kicking, do a lot of work on my drop goals. Sometimes I don’t get to use them, but there was a nice little leverage to put 10 points between us when that one went over and make them go for the kick to get a losing bonus point rather than the try at the end.”