Munster Tiger Tom had a foot in both camps 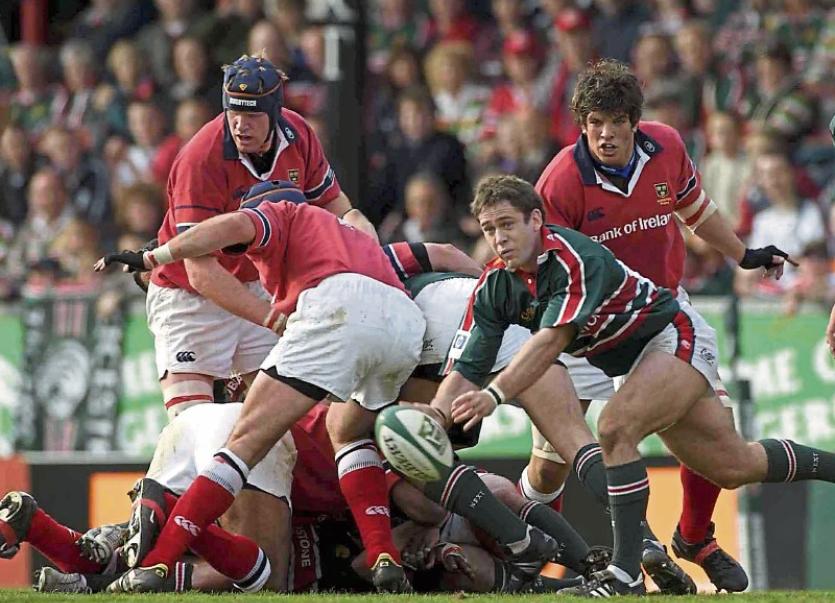 Tom Tierney in action for Leicester against his former club

TOM Tierney closed the door on a dejected Leicester Tigers dressing room at Welford Road and walked down the corridor towards an altogether different scene.

Munster had just done a number on the Tigers on the own patch in their 2003 Heineken Cup quarter-final and Limerick man Tierney wanted to pass on his congratulations to his former team mates.

How did you feel walking from the Leicester dressing room down the corridor to drop in on the celebrating Munster players?

Tom Tierney: "Obviously Munster was my club, I was very proud to play for Munster. We were very disappointed in the Leicester dressing room when we came back in.

“When I got changed I made it my business to actually go into the Munster changing room and say hi to everyone.

"They were are all there and obviously they were all delighted with themselves. When they saw me coming in, they started signing 'We are the Greeners' which is a Fairview Rangers song which I used to sing.

“It was a very, very emotional time and I remember Anthony Foley coming over to me and giving me a hug and saying 'well done, kid'. That was a memory that came flooding back to me a few weeks ago with the sad passing of Ant. I will never forget that.

“Every single one of the Munster players sang the song and it was a really special moment for me personally and it just showed the type of people that I was with for so long.”

You played for Munster against Leicester in 2000 before a Heineken Cup quarter-final?

TT: "We went over to Welford Road for a Friday night game in 2000. We were shy of a couple of games before our Heineken Cup quarter-final that season.

“The thought process was that to get a tough game like that against Leicester who were neighbours of Northampton.

"I played in that and then obviously I had switched sides for the quarter-final in 2003.

"The one thing that struck me about Leicester was how similar it was to Munster, just in the type of people and the type of mentality that the people have. The crowd is very knowledgeable when it comes to rugby. There is a huge attachment between the Leicester jersey - like there is with Munster - with the fans.

"The uniqueness of that is what Leicester thrived on when they were playing the Wasps and the Harlequins, the real upper class English clubs whereas Leicester was more of a working class place, with a working class mentality, similar to Munster.”

Leicester have built their reputation on being hard-nosed and abrasive?

TT: "There is a huge parallel between Leicester and the Munster group that had come through at that time.

“From an organisational point of view, they were better than most.

"We came away from that night (friendly in 2000) happy to have a game under our belts, but also knowing that we hadn't gone to London, to play a London side where there is a lot of showboating and stuff, we had gone to a real hard place, Welford Road.

“It was a dry evening, but a cold one, a bit dreary, very similar to playing in the old Thomond Park.

"From that then, there has been a lot of history between the two teams, Munster winning the '03 quarter-final at Welford Road, the Back incident in the final in 2002, Leicester beating Munster twice at Thomond Park.

TT: "Yes in 2002. I signed just a few weeks before Leicester beat Munster in the Heineken Cup final. I was there for two years before I went to Connacht.

"It was weird. Losing the Heineken final with Munster in 2000, the semi-final to Stade Francais in 2001, it was an absolute heartbreaker then in 2002, we were all just hoping to get over the line.

"For me personally, knowing I was going to a club Leicester which had just won two Heineken Cups in a row from the club they beat in the '02 final was just a bit weird.”

How did that move to Leicester come about?

TT: "The catalyst was my shoulder injury that kept me out for the best part of 13-14 months. I was at a crossroads and coming back to fitness, I felt I needed a change.

"Thankfully, I had a couple of contacts in England. It was something I always wanted to do anyway. I didn't want to be a 'one club player'. That happens with a lot of guys.

“I like to move around and see different ways of doing things, different cultures and teams. It was borne out of the necessity of freshening myself up and getting out of Munster. I was obviously behind Peter (Stringer).

“Then I got injured which kept me out for those 13 months and two or three other young guys were coming through. Thankfully I had enough work done from a CV point of view to get an opportunity with Leicester.”

What was it like going into a dressing room with the likes of Martin Johnson, Ben Kay, Neil Back, Austin Healey and Martin Corry for the first time?

TT:"It was the very same initiation as we would have had at Munster. We were training for the summer, we had a team bonding and they made sure I was welcome and I knew where I stood after that bonding session.

"I am still good friends with a lot of guys over there. I am very close to Leon Lloyd, Geordan Murphy too, Will Johnson, Martin's brother, stuff like that. It is amazing how you keep these friends.

"If you ask anyone about Munster in Leicester, there is a fondness there. There is a respect and there is a realisation that they are tough, but there is a huge respect.”

What was the build-up to the 2003 Heineken Cup quarter-final v Munster like for you?

“I made it my business to be sure I was starting for that game. It didn't go well for Leicester, but that is history now.”

"The only funny one during the game I remember was, I would have been very good friends with Frankie Sheahan. We came up through the under-age ranks together and the whole lot.

"I remember he came flying over a ruck and he fell on the ball and I rucked him out of it. He just started laughing and he put on a voice saying, 'I am sorry Tom, I am so sorry'. I got the pass away and it hops off the ground. He started clapping! We had a laugh about it. It was a pressure situation at the time, alright. It was a brilliant occasion.

"I was at Leicester for two years and I came back for four years with Connacht before packing it in from a playing point of view and moved in to coaching .

“There are a lot of strong ties between Munster and Leicester. It has continued recently with the clubs meeting each other in the Champions Cup two years running.”